Not too far from Pemberton are some sand dunes that are just begging to be climbed.  We picked a lovely afternoon for visit.  We’ve been loving the weather since we left Perth, it’s felt like autumn while we are still in summer.  We expected to be in the heat a lot longer than this so it’s been a welcome change. 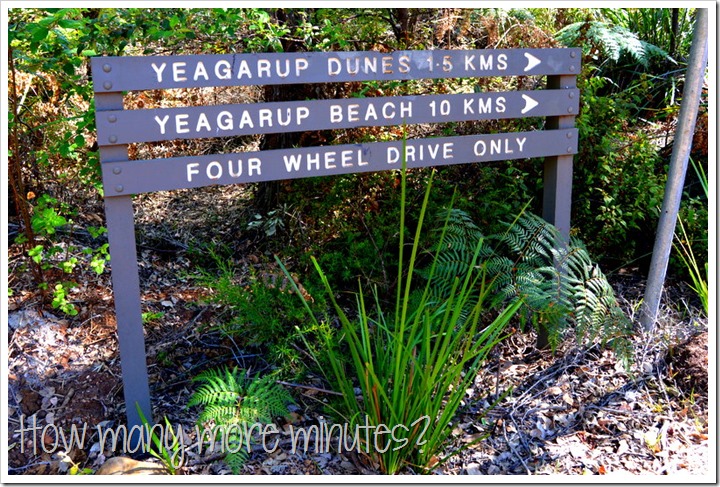 First we had a quick look at the lake and pondered this jetty. There was a nearby sign warning against diving in but this jetty looks made for it, doesn’t it?  The water looked to shallow for jumping, but TurboBug (2) tried his hand at some fishing. 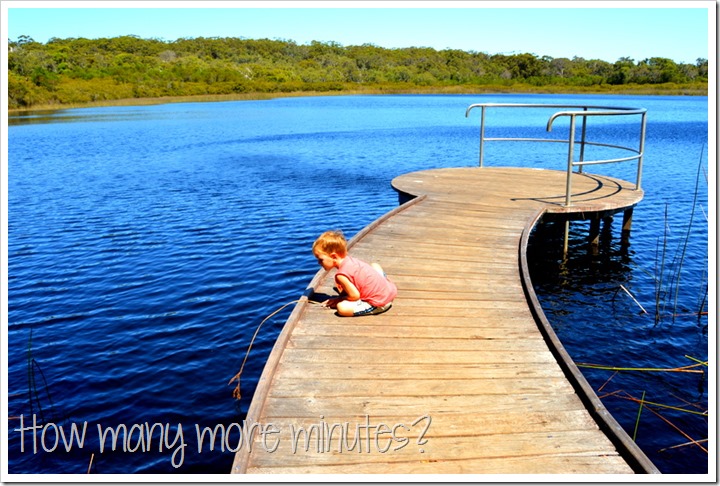 Then we set off to walk the 1.5 km to the sand dunes.  We don’t have 4WD so we parked near the lake and headed up the road which very quickly became sandy.  It was a nice shady walk but on soft sand so a bit more work, not that the kids noticed.  The road suddenly turns into a sand dune and the tyre tracks go straight over the top.  According to this site, these are the largest land-locked mobile dunes in the Southern Hemisphere, and they move toward the forest at the rate of 4m per year. 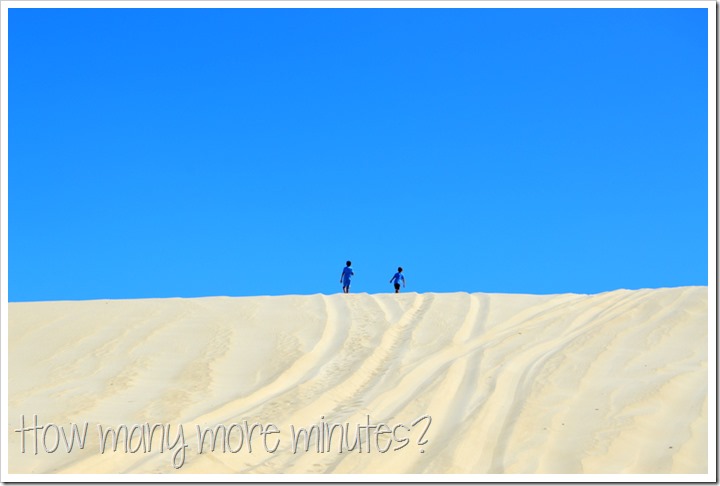 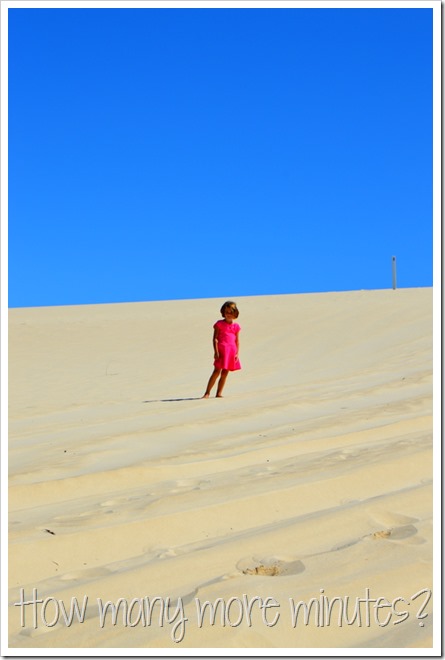 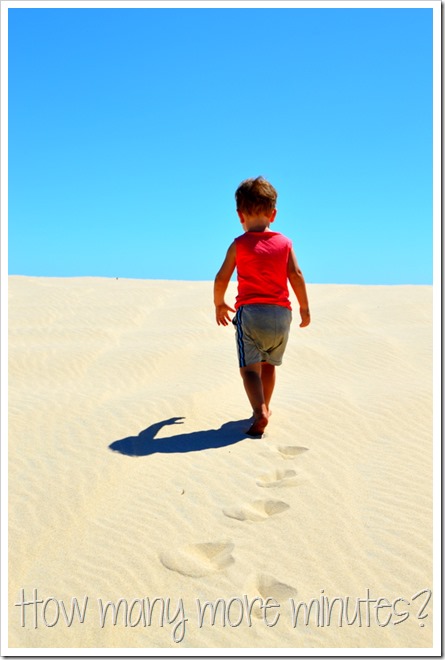 I was hoping the view from the top would include the ocean (9 km away) but no such luck. 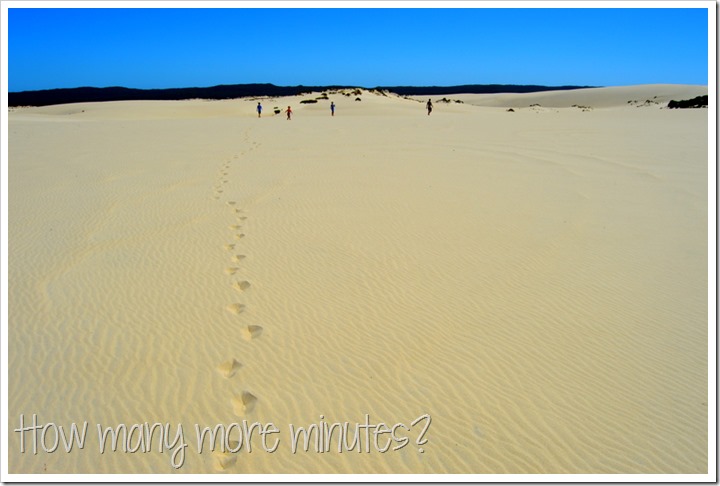 The others all made their way over to a steep dune to do some running and jumping and bounding down.  At one point they held hands to go down together but as one of them has short legs they didn’t quite make it down in unison.  This particular spot had many tracks on it from others running or riding or driving down. 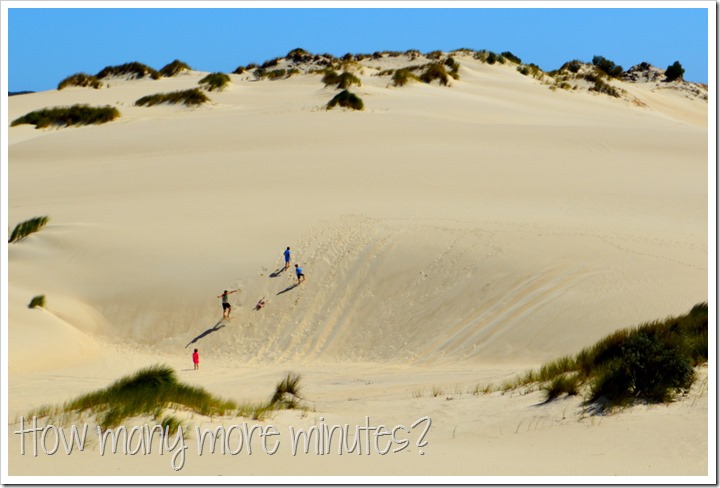 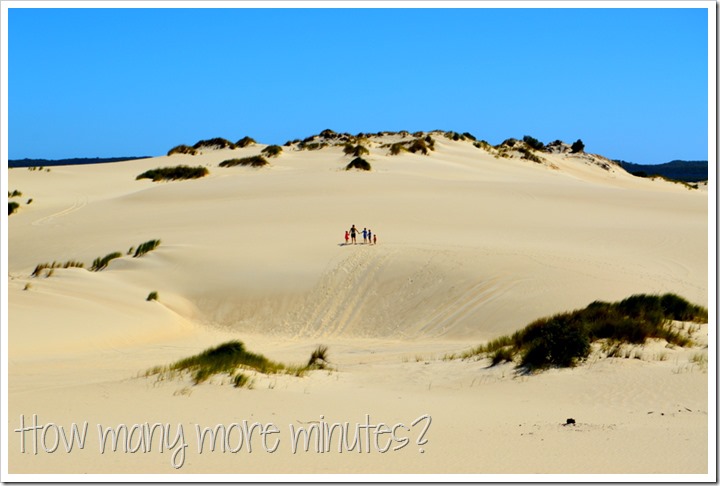 Every once in a while a good wind would come through and blow the sand off the tops of the dunes creating a blurred effect, it was so neat with that white sand and beautiful blue sky. 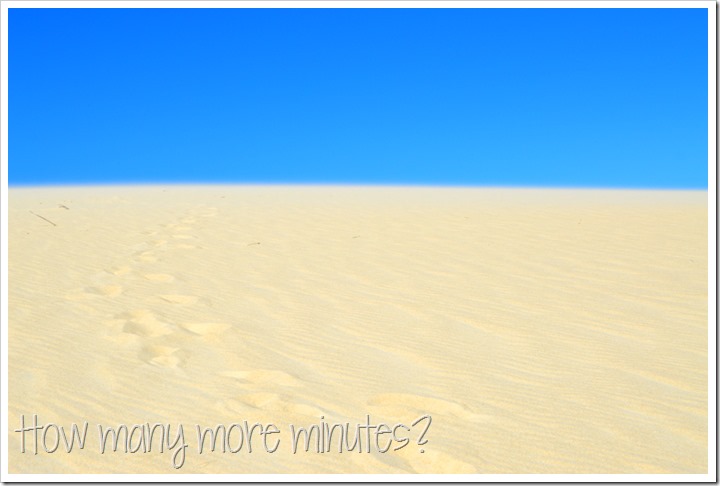 Someone forgot his sunnies, left them back where the road opened onto the dunes with our other things.  This was his way of compensating for the brightness.  It was warm, but not too hot.  The sand on the dunes was cooler to walk on barefoot than the dirt-mixed sand on the road. 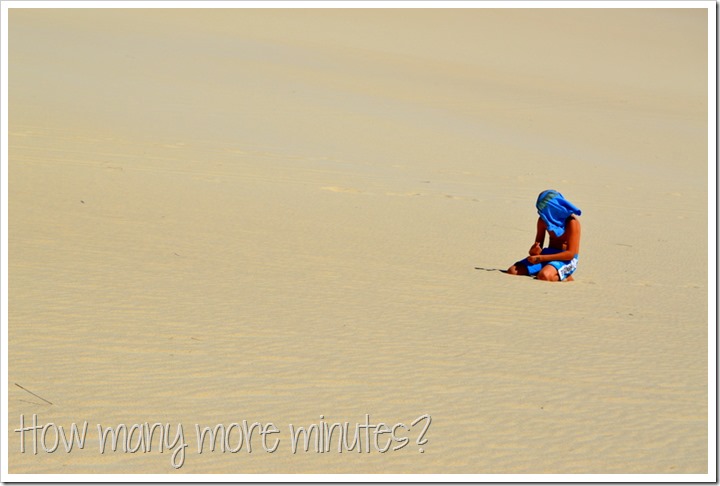 This one thoroughly enjoyed himself until it was time to go.  Then he was dragging his feet.  Or maybe his whole body. 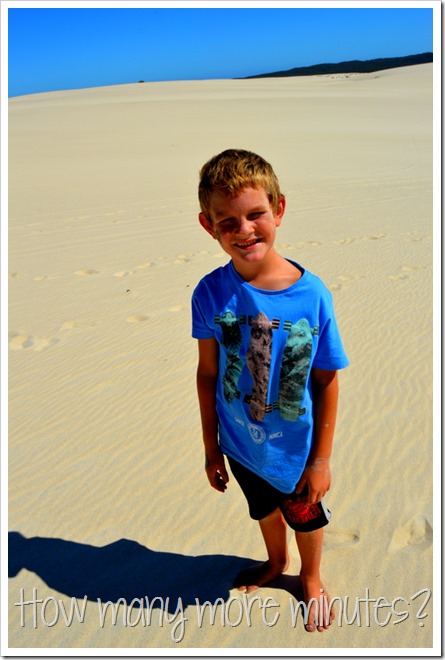 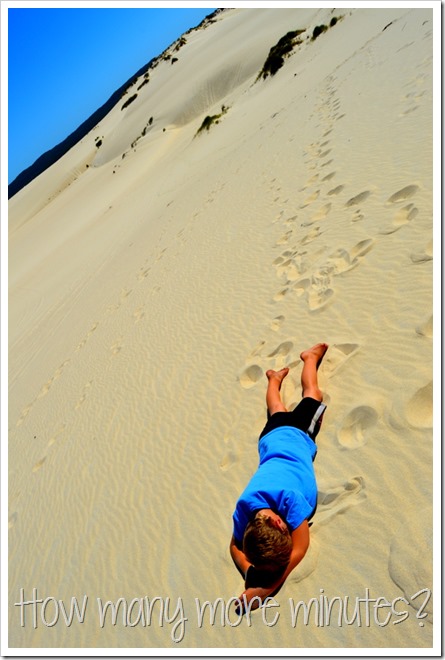 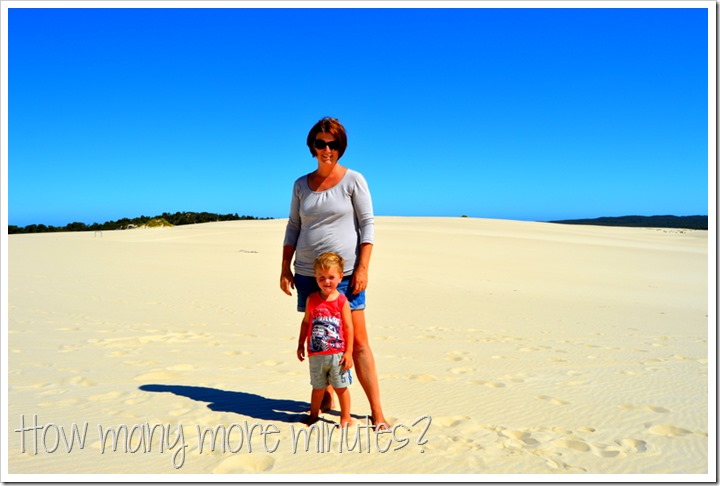 JitterBug had TurboBug copying his antics as we left.  Or tried to leave, anyway. 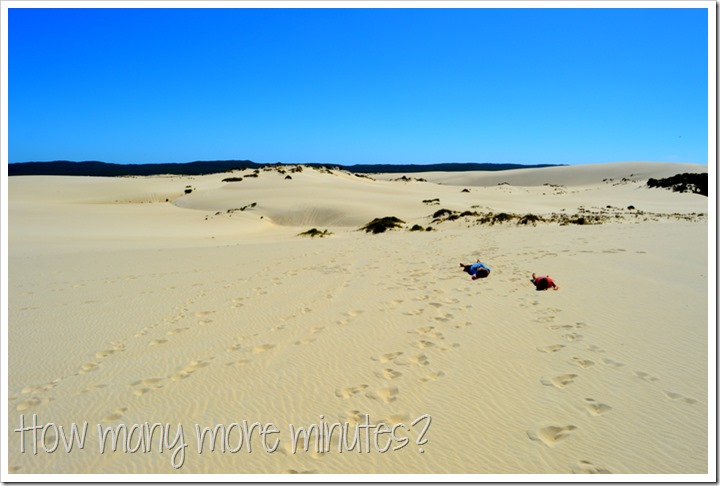 TurboBug and I bounded down the final dune. 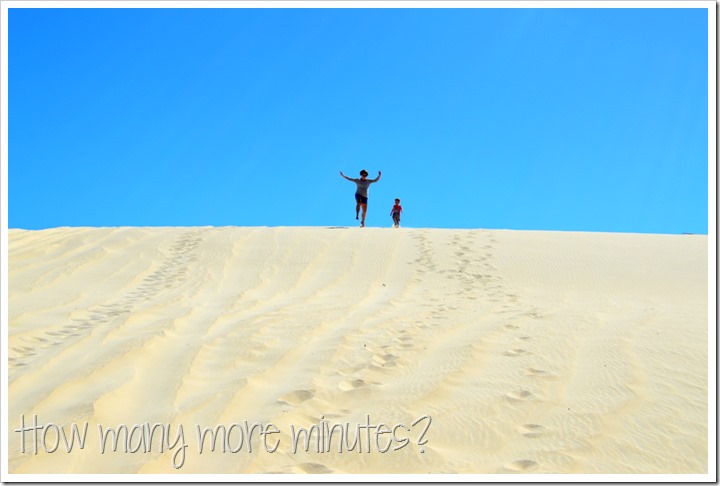 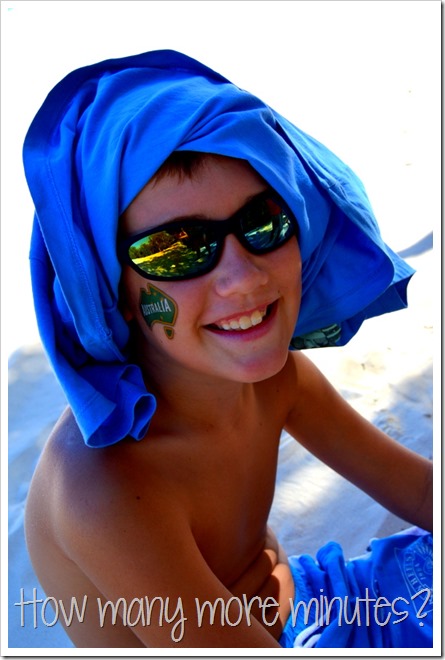 After taking his time and laying in the sand, someone was covered in it. 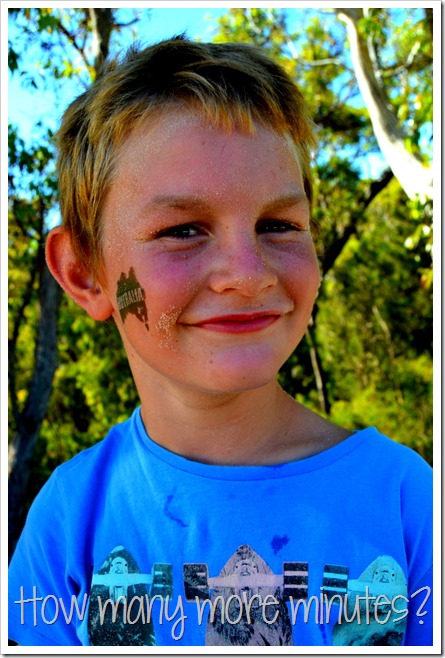 Here’s a view of the road.  Quite narrow, but we only had one car pass us on the way.  We saw a couple of others on the dunes. 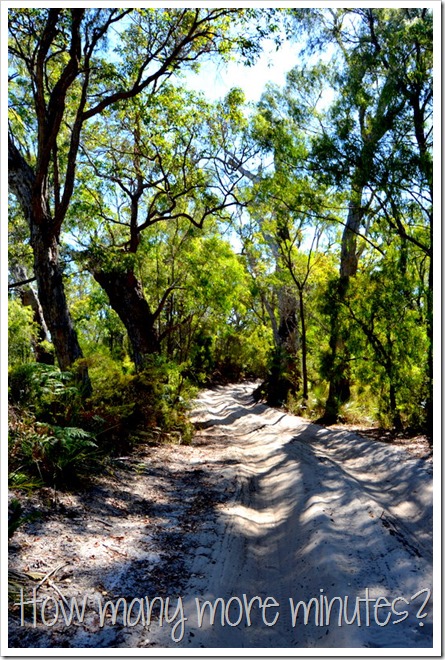 These flowers are called kangaroo paws!  They really do look like little kangaroo paws like on the joeys we saw at the visitor centre. 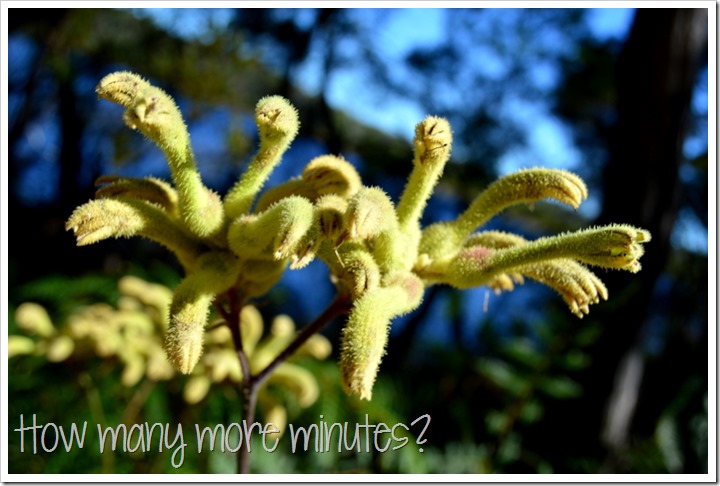 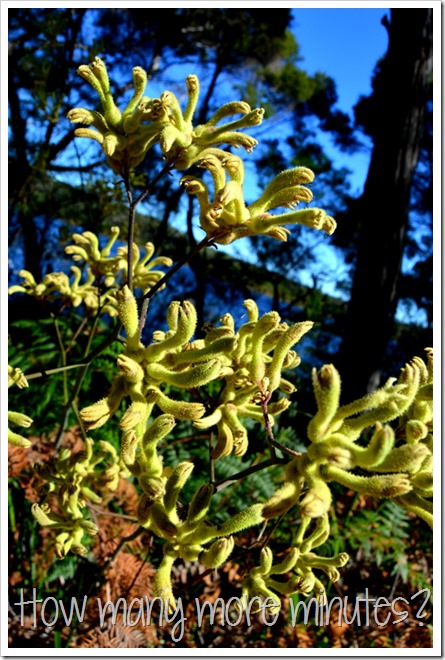 One of a gazillion grass trees we’ve seen during our travels. 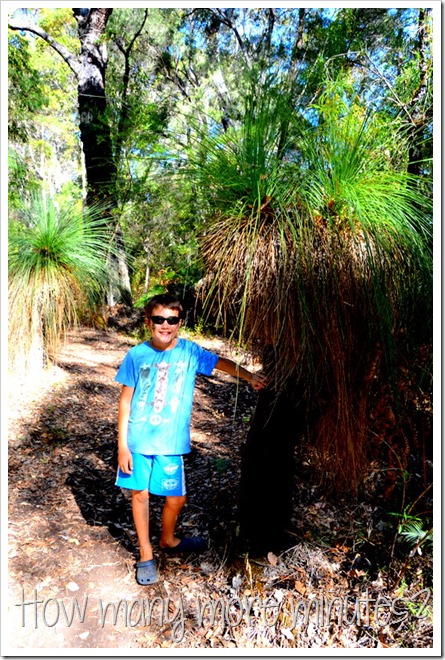 We’ve driven past many sand dunes but these were the first we sought out for a good play on them.  Having the boogie boards along might have been fun, but I don’t think we would have survived carrying them down the 1.5 km road to the dunes.  I mean, we could have carried them, it’s the complaining we wouldn’t have survived!