January 2016: Somewhere along the way in our travels Dada saw pictures of these cool climbing trees near Pemberton.  The trees are karri trees, which we read are the third tallest trees on the planet. We didn’t know too much about the climbing but it looked like it would be fun and something we haven’t come across before.  Fun.  Right.  Do you see how tall this tree is?  Do you see my tiny children at the bottom of it? 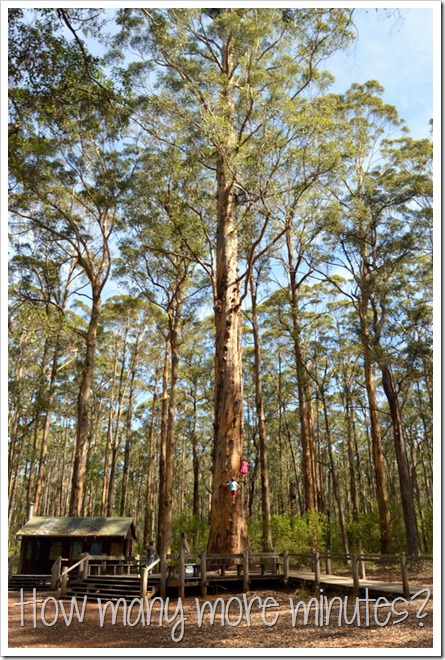 We had to take it in turns as the youngest had to wait at the bottom.  LadyBug (6) and JitterBug (8) clambered up immediately with a nervous Dad behind them.  (More nervous for them than for himself.) SkeeterBug (11) brought up the rear while a nervous mum watched from the ground.  I’d read about it but just did not realise how terrifying it would be to watch my children climb it.  I had to look away several times. 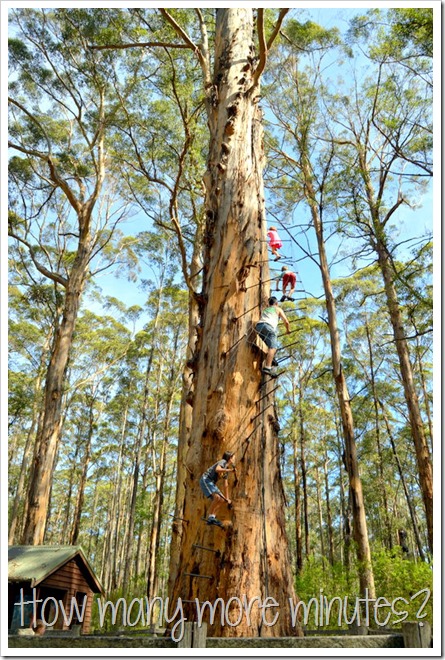 Turns out that when you are eleven you have a much more healthy fear of heights than when you are six.  I’m glad SkeeterBug went last or he would have felt rushed as Dad would have been trying to keep up with the younger ones to keep an eye on them. 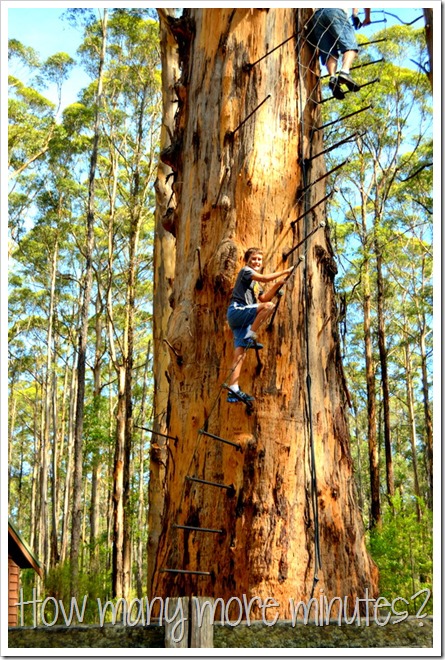 You know, the younger ones with no fear.  Sean heard once when we toured a ski jump facility in Utah that kids don’t develop their sense of fear until after six or seven so they try to get them on the ski jump at a young age.  I don’t know if that’s true, but the younger two didn’t seem nervous at all. 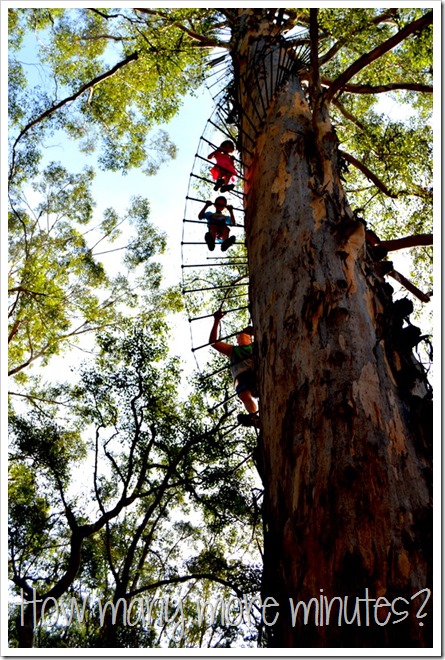 There are three huge trees you can climb near Pemberton.  We chose this one because it has a landing part way up the tree.  A place to rest, a place to regroup and decide if you want to go the rest of the way.  Have I mentioned that the platform at the top is 52m off the ground????? That’s 170 feet.  And this was the shortest of the three trees.  At the landing you are informed that the easiest part of the climb is over.  After that the climb is near vertical.  I think I read there are 170 rungs to climb, we should have made the kids count them! 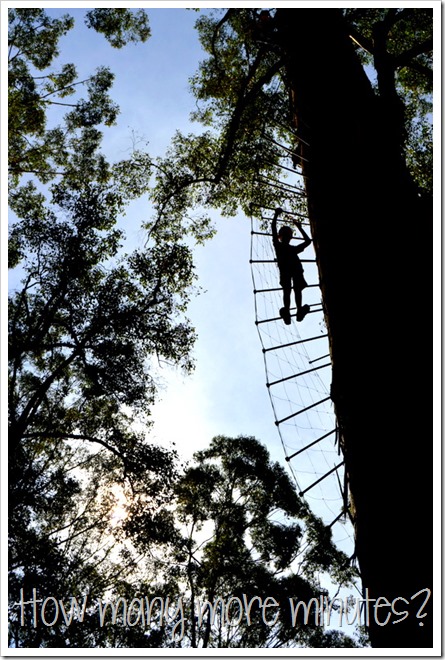 TurboBug (2) waited at the bottom with me and tried the first few rungs.  There were plenty of sticks and rocks to keep him occupied, he wasn’t upset about not climbing.  Good thing, because although Sean had thought of carrying him up in the Ergo carrier we realised as soon as we saw the tree that that was a no go. 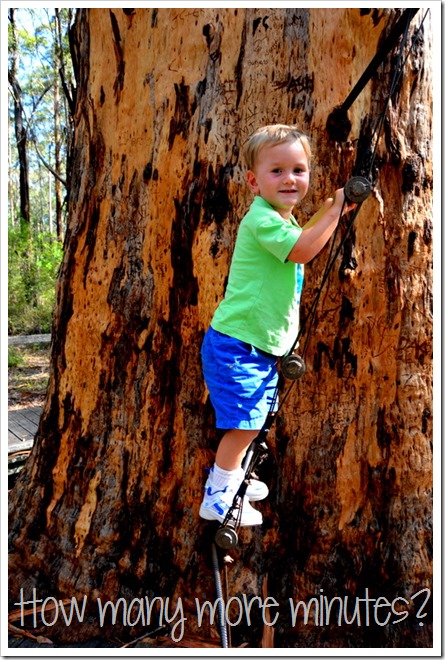 See the platform at the top?  It’s a fire lookout.  Did I mention it’s 52 metres high?  The last part of it is a ladder leading into the tower lookout.  There’s JitterBug, almost there. 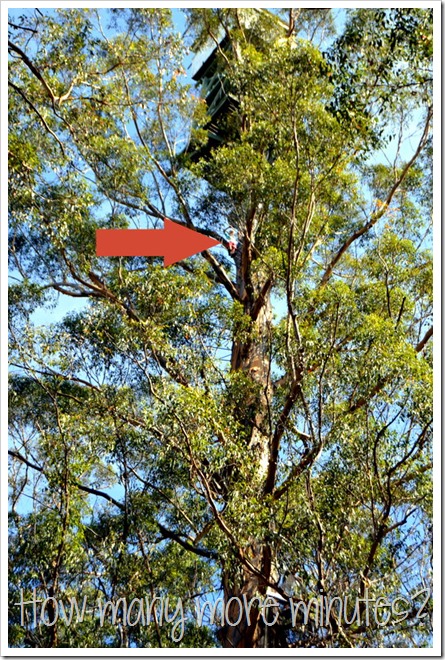 Here’s SkeeterBug at the landing and JitterBug nearly at the top.  SkeeterBug had a good rest and a think about whether he would climb the rest of the way.  He decided to go for it and they all made it to the top.  I’m so proud of SkeeterBug for thinking it all through and making his decision.  It’s not that the others were more brave, it was obvious that they just didn’t have that same awareness that he had. 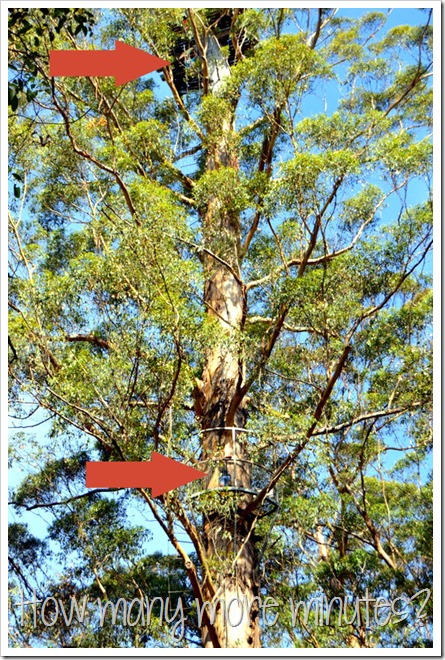 I don’t have a good picture of them all at the top but here they all are on the landing on the way back down.  Dad kept having to remind them to focus on what they were doing on the way down, they were very comfortable once they were headed back to solid ground and were having conversations about unrelated things.  While my heart was in my throat.  Focus?  Yes, please focus. 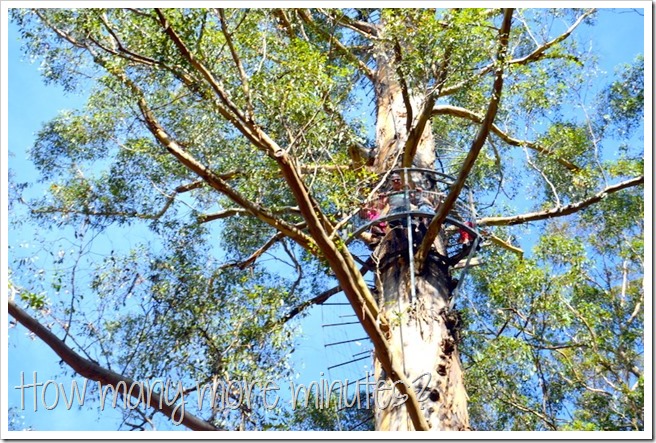 My heart was in my throat pretty much the whole time, as was Sean’s.  There’s nothing between those rungs and I kept picturing, or trying not to picture, a child slipping in between one and falling without anything to stop them.  We were commenting with another person there how it’s surprising to find something like this these days just open for climbing and without any safety gear or anything. 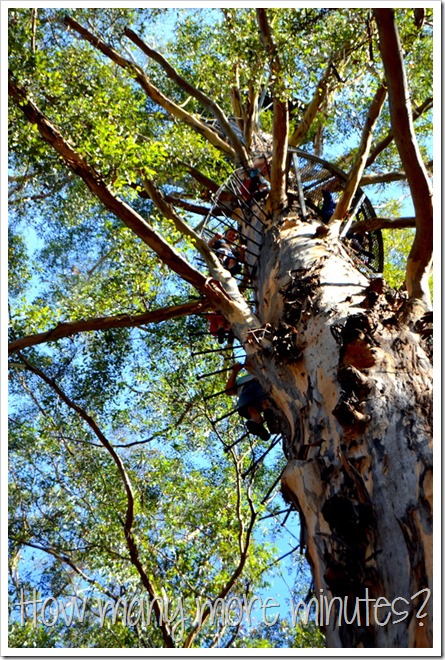 Here they are, all safe and sound.  Back on the ground, or nearly. 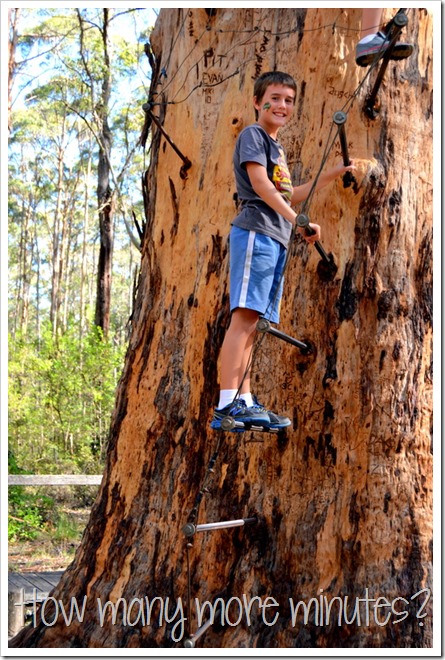 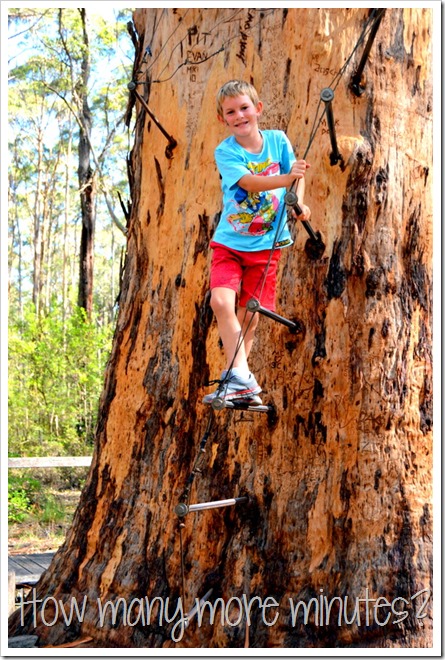 Now it was my turn.  I didn’t make it very far.  I thought I might make it to the landing but I couldn’t bring myself to do it.  Maybe if Sean had been behind me coaxing me a bit, but by myself I didn’t have the motivation. 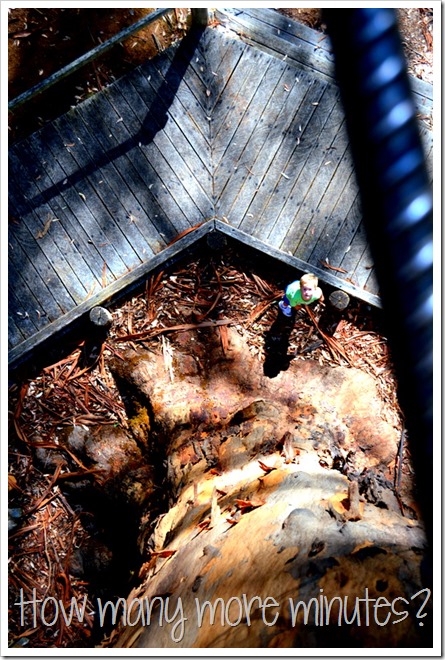 Here’s the warning sign at the bottom of the tree.  The very last bullet point: ‘Climbing is not recommended for children.’ You don’t say? 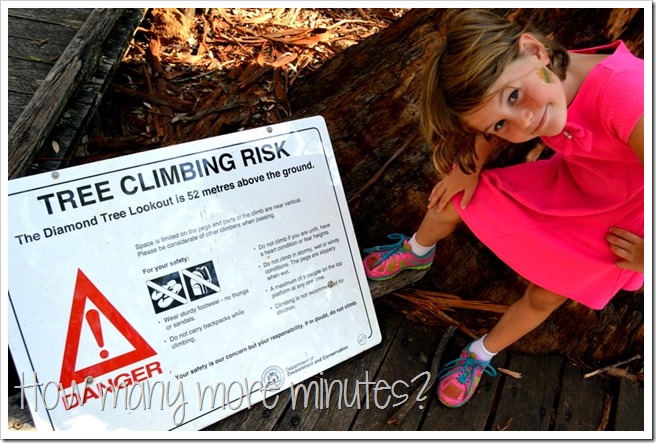 We chose not to visit the other trees since we knew if we saw them the kids would want to climb them and our nerves would not be able to take it.