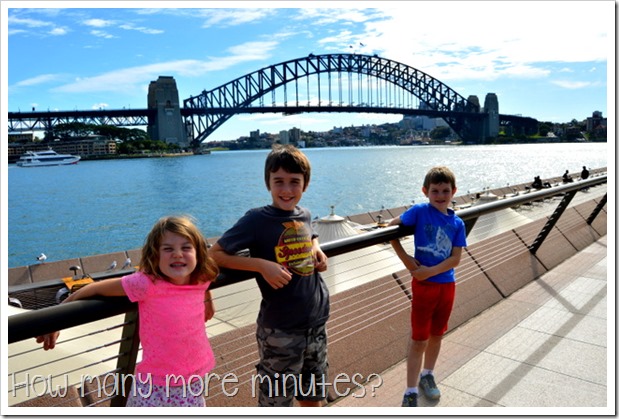 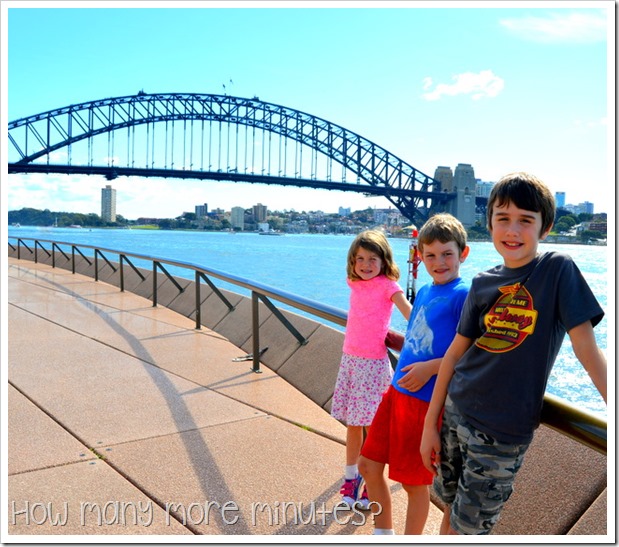 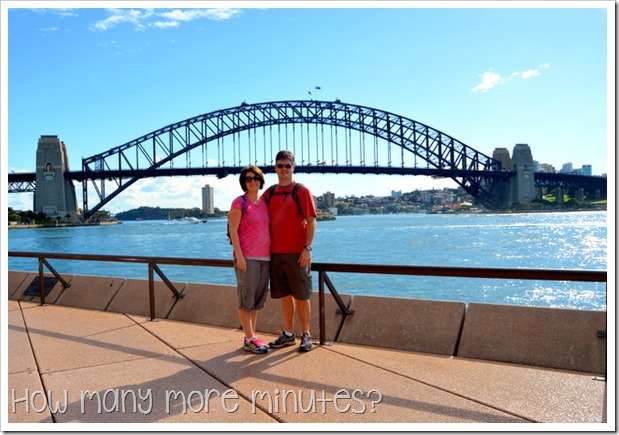 This is looking back into Circular Quay.  You can see all the tables for the nearby cafes.  And all the seagulls waiting for people to leave their tables. 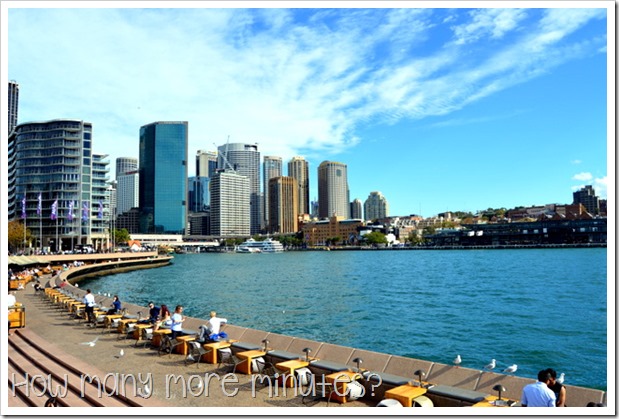 Really, the opera house is hard to photograph up close.  It looks prettier from a distance.  Up close the sails look like they are going in strange directions.  There are heaps of people wandering about.  The day we were there we saw many joggers headed around the opera house only to be frustrated because one side had been closed off for an event.  The botanical gardens are next door and it looked like a regular route for some of them, to run around the opera house and then into the gardens.

When we later walked over to the bridge we got some better views of the opera house. 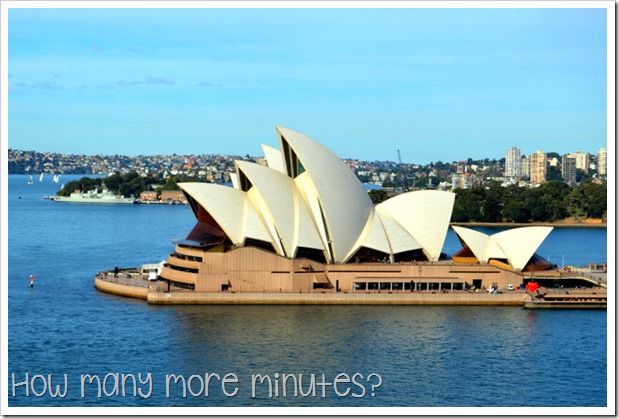 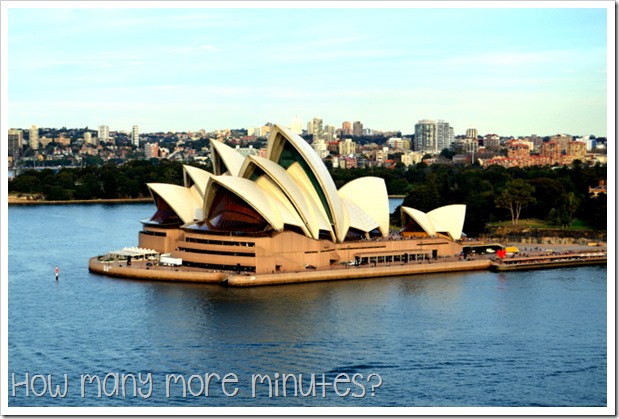 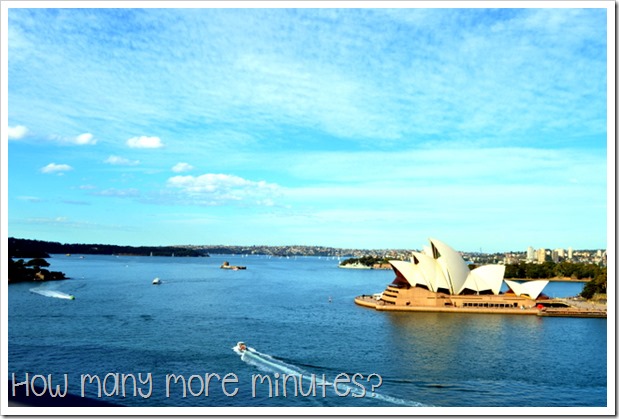 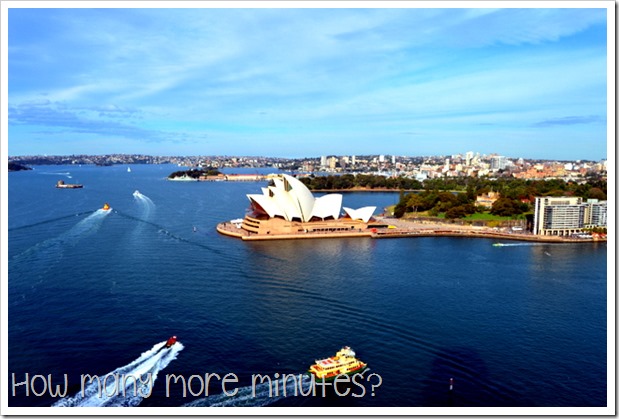 There are more palm trees as we head north!  That means warmth!  After winter in Canberra, anywhere would be warm.  I’m happy to see them.  🙂 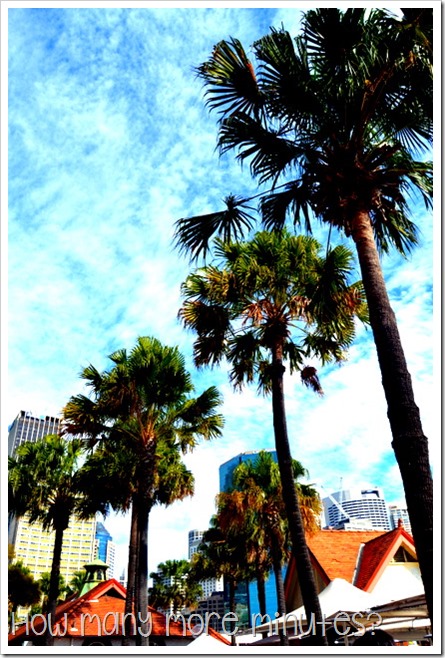 We did travel into Sydney by car once.  We drove over the bridge. 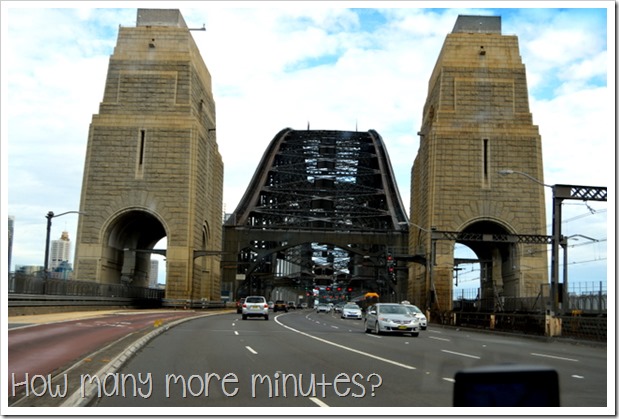 There’s a train again!  Way over on the right. 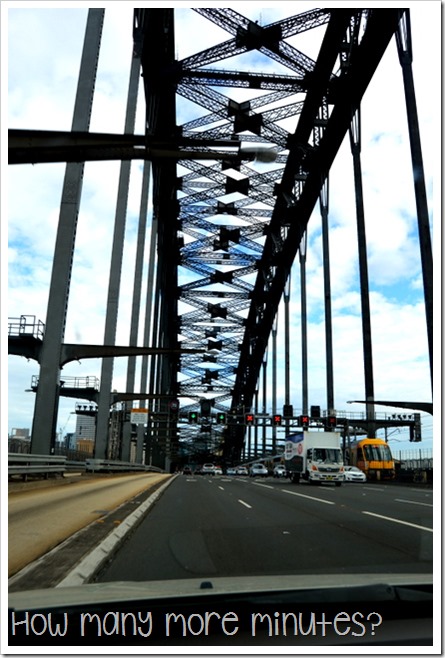 The rest of the time that we went into the city we took the train.  Much to this toddler’s delight.  See the double decker train?  The kids loved that, they always wanted to alternate whether we sat up top or down below. 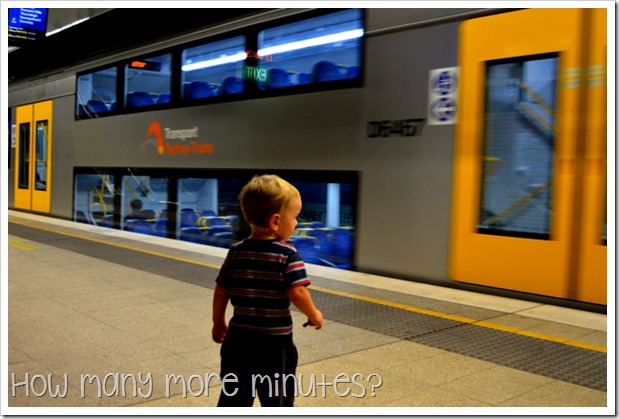 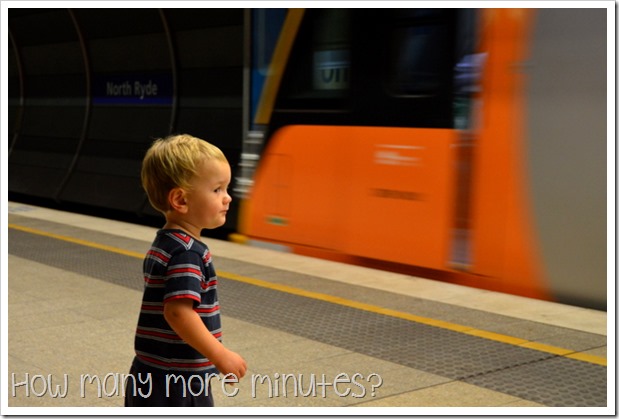 Most of the time we didn’t have long waits at the train station.  We didn’t check the timetables or anything, just showed up since we didn’t have specific times to be anywhere.  Most times we had waits of less than six minutes, but there was one time we had to wait over twenty.  In a very quiet  and very clean(!) station, the one closest to our caravan park.  We amused ourselves by taking pictures of each other and getting TurboBug to sing for us.  He has quite the repertoire.  The potty song is one of his favourites. (Didn’t you sing some sort of potty song for your kids when they were toilet training? Complete with dancing? Of course you did.) 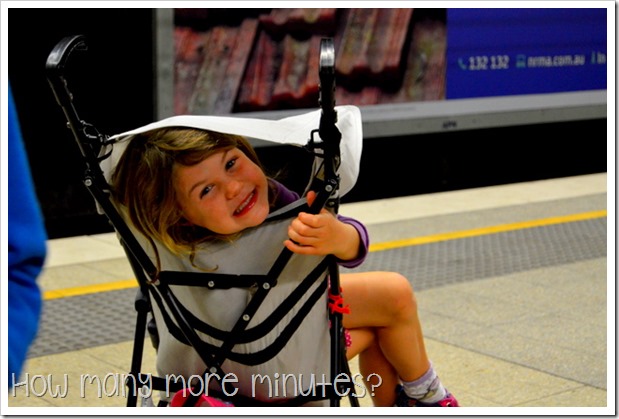 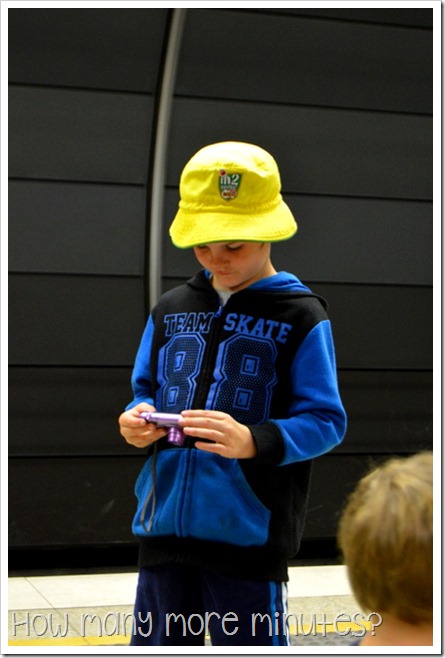 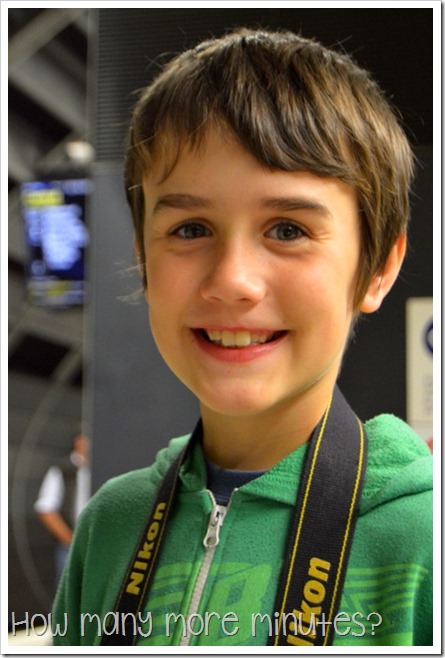 LadyBug decided to perform her favourite song for us while we waited.  You know, that song that is very popular with 5yo girls everywhere.

Seriously, TurboBug was so happy all week.  We got to ride the train numerous times.  He loves trains.
Let me say that again.  He loves trains!
The train station was maybe a ten minute walk from our caravan park in Lane Cove National Park. We even rode the train to the supermarket since it was only one stop away.  Of course, that required bringing back bags of groceries on the train and then carrying them back to the caravan.  Wasn’t that fun! 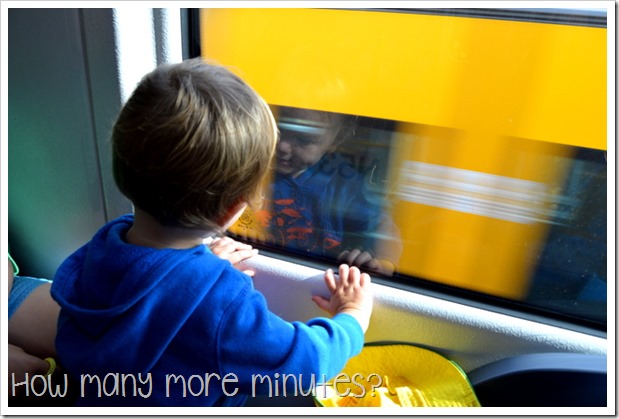 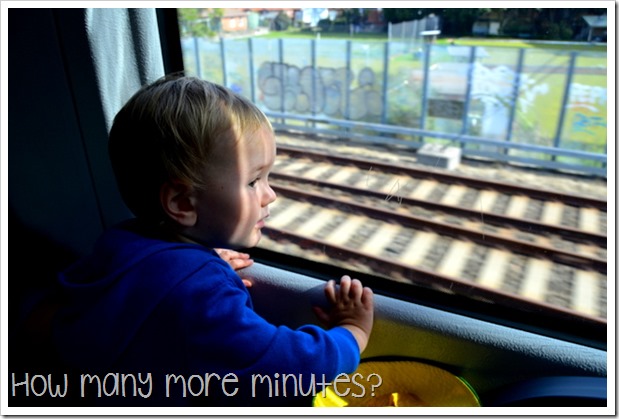 There were times we found ourselves on trains that were quite crowded, especially at the end of the day.  We had the four kids and a pram.  We often had to switch trains, finding our way through crowded stations to our next platform.  You really need eyes in the back of your head to be able to keep track of four kids in crowded, unfamiliar places.  Especially when you’ve got one child that lags behind and another one that runs ahead.  Thankfully TurboBug was happy to be in his pram most of the time.  That has changed since our time in Sydney, he really wants to push the pram now. We survived and we were always pretty tired by the time we returned to our caravan park.  We may have overdone it a bit.  With this lifestyle there is such a temptation to always be on the go, making sure you get to see everything there is to see.  It’s so crucial to rest every few days or we all become overtired and cranky!  We only stayed in Sydney a bit over a week.  We didn’t try to see everything since we know we’ll make it back there one day.

We moved out of our house the end of September last year.  We spent about...