Every afternoon at the Koala Hospital in Port Macquarie they give a ‘Walk & Talk’ tour about the koalas while they are being fed.  Sounded like the perfect time to visit so we headed there one afternoon during our stay in the area.  In my head I was picturing some kind of indoor hospital with separate rooms and viewing windows.  So wrong!  All the koalas are outside in separate enclosures.  The trees in each enclosure are carefully separated from any outside trees so that the wild koala population does not mix with the patients.  Apparently that was an issue in the past, they told us the story of one wild koala that visited more than once and fathered a couple of babies! There are two of the koala statues from the Hello Koalas sculpture trail at the hospital, so of course we had to do some pictures when we got there. 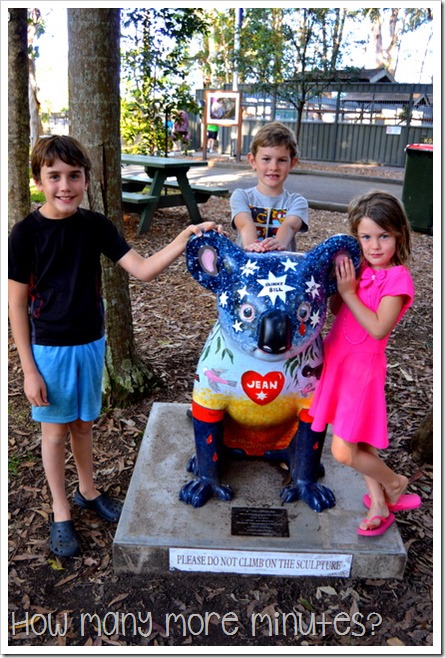 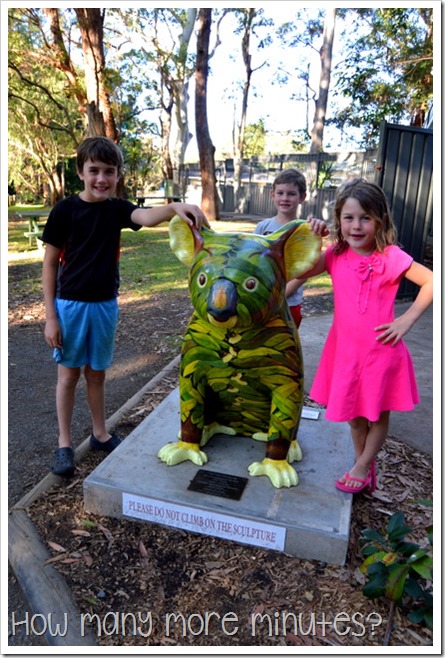 I read on the Hello Koalas website that these fibreglass koalas were all given extra coats of paint to protect them from the weather and from their loving public (it’s supposed to help in case of graffiti also).  The signs say not to climb on the koalas, but cuddles are okay.  Good thing, it would be hard to keep kids from touching them. 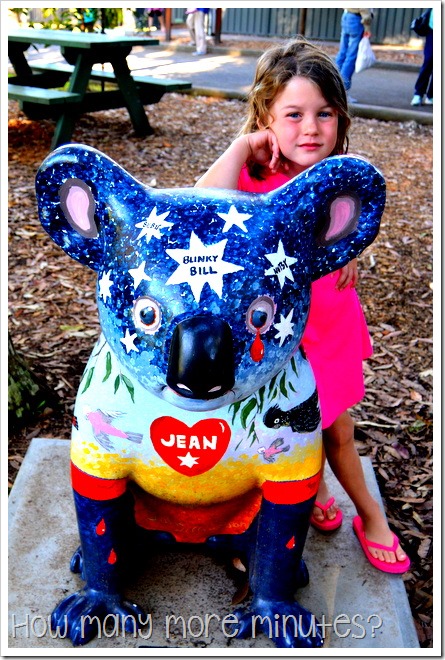 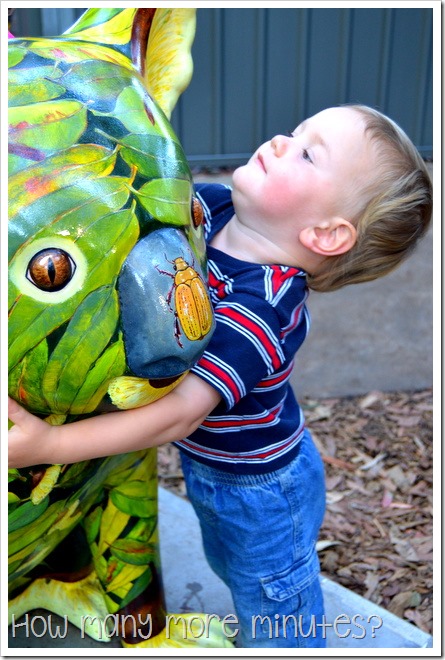 One of the interesting things we learned about koalas is that they have two opposable thumbs on their front paws.  See them on the statue? Good for climbing and hanging onto branches while they eat.  The back paws have four toes and a clawless thumb.  Two of the toes are partially fused together and make a great grooming claw. 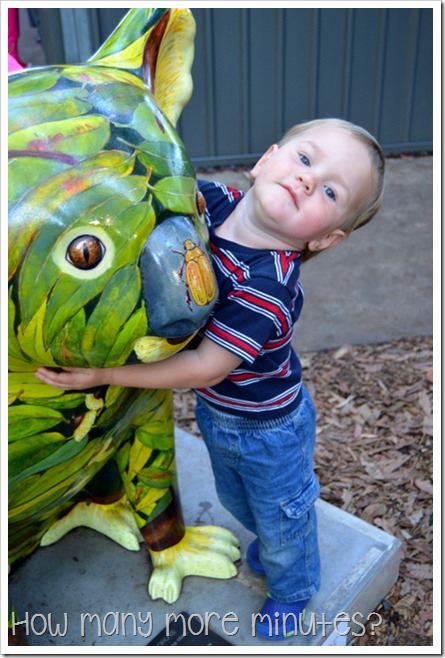 The koalas at the hospital are given vitamin supplements in a syringe.  Don’t they look soooo cuddly?  The staff are all volunteers except for the supervisor role. Someone has to be in charge, right?  I remember reading you could start training to be a volunteer at fourteen, how fun would that be? 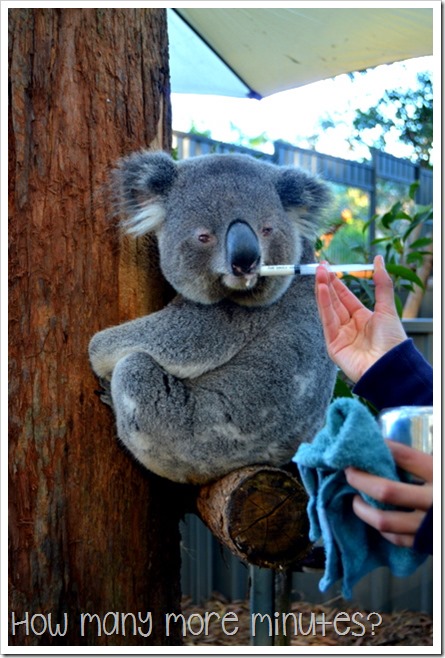 We learned that Queensland koalas are leaner and have shorter fur than those in Victoria.  They have a different shape because koalas up here don’t need to carry around that extra layer to insulate them from cold weather.  There’s actually only one species of koala, so it’s interesting to see how their bodies adapt to the different climate.  It’s thought that the name ‘koala’ comes from an Aboriginal word meaning ‘no drink’ since koalas rarely need to drink water.  They get enough moisture from the gumtree leaves. 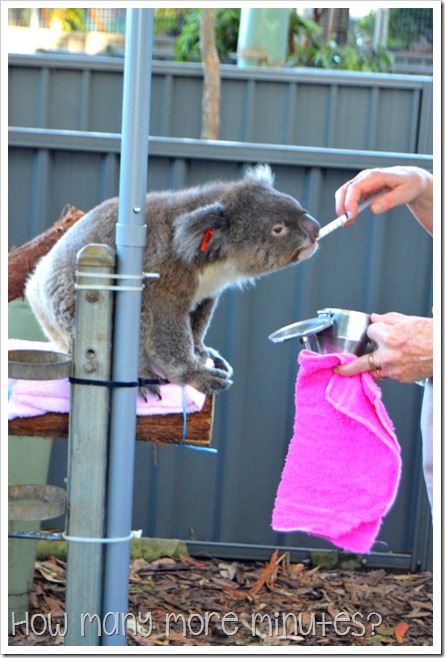 There were three baby koalas, they were all way up in the trees.  This one was the closest, the others were way up high!  They weren’t being fed at the same time as the others so they had no reason to come down while we were there. The kids were entertained when the tour guide told us how mama koalas mix their poo in with their milk in order to introduce the toxins in gumtree leaves to their baby’s digestive system.  Isn’t that a lovely idea? 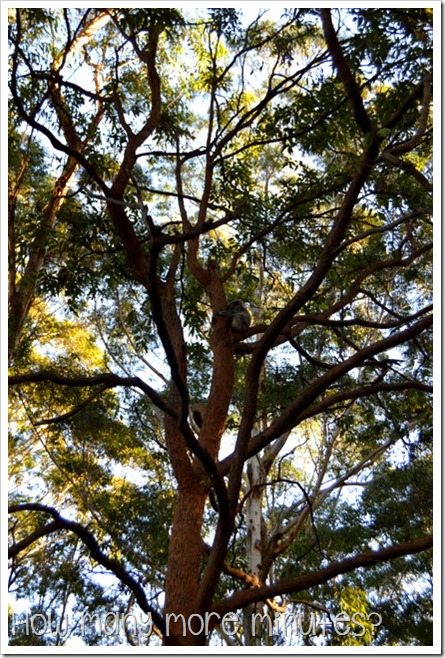 My very own koala.  Okay, not really.  But this picture was taken while we were there so it goes in this post.  Because he’s cute and cuddly, like a koala.  🙂 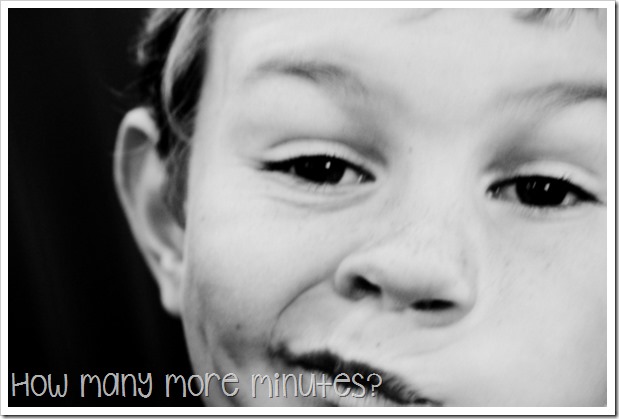 This one, named Westhaven Barry, had a severe case of scoliosis.  The koalas are named for the area they came from along with the name of the person who found them.  (You can see examples of other names on the hospital’s adoption page.) Makes for some interesting names!  I’ve learned from their website that Barry has gone to the ‘Great Gumtree in the Sky’ since our visit.  He’d been at the hospital since 2008 and had a penchant for escaping his yard to visit the others. 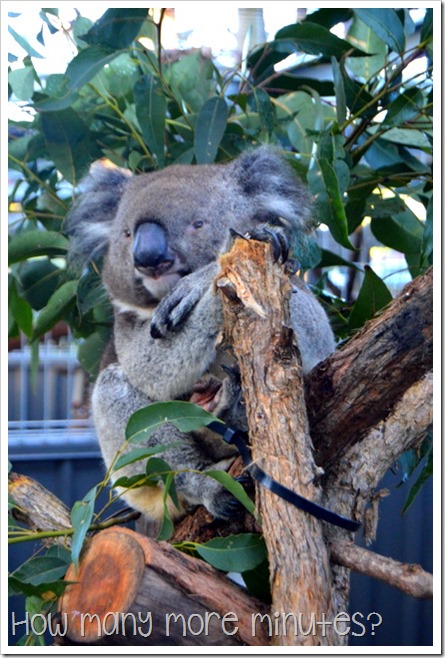 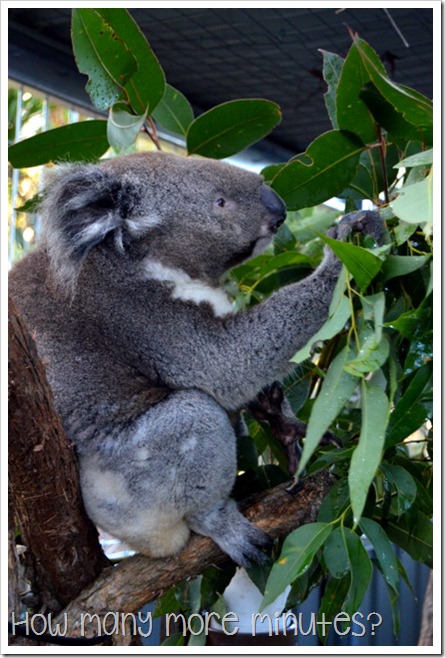 Look at this one peaking out from behind the leaves.  Gorgeous!  There wasn’t a huge number of bears there when we visited.  During mating season, when koalas are on the move, their population at the hospital is higher.  According to their website they care for 200 to 250 a year.  The hospital is a charitable organisation and relies heavily on donations. 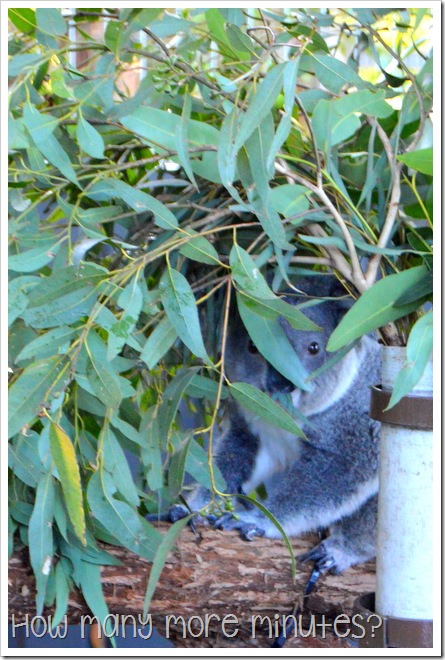 There was a viewing window where you could watch any procedures happening.  There were also displays of skulls and such.  I’m sure this giant, injured koala has featured in many pictures with many children.  🙂 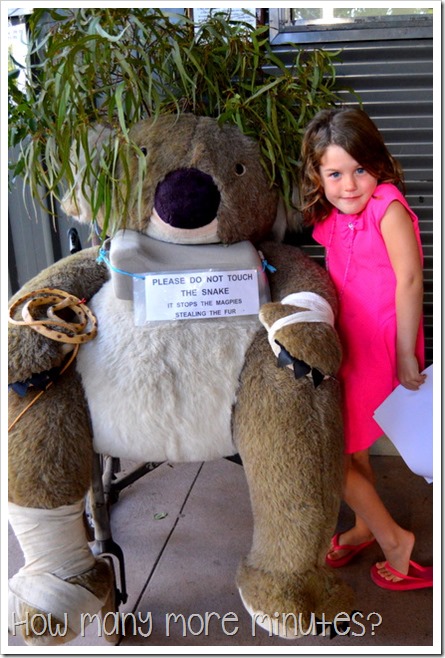 Admission and tours are free, but they do need donations to continue their work.  We were very happy we visited.  If we lived in the area I’d be signing my kids up as volunteers when they’re old enough!