Port Macquarie has this great thing, a koala trail called Hello Koalas.  There are about 50 fibreglass koalas, hand-painted by local artists, set up all over town and a trail map you can follow to find them all.  What a great idea to get tourists visiting all over town in an attempt to see all of them.  We weren’t the only ones headed around town with our camera snapping pictures of these cute and colourful koalas! The first one we saw was at the Sea Acres Rainforest Centre, which is an elevated rainforest walk.  It was wonderful, even in the rain! It’s also where we picked up our koala trail guide map to help us find all the other koalas around town. 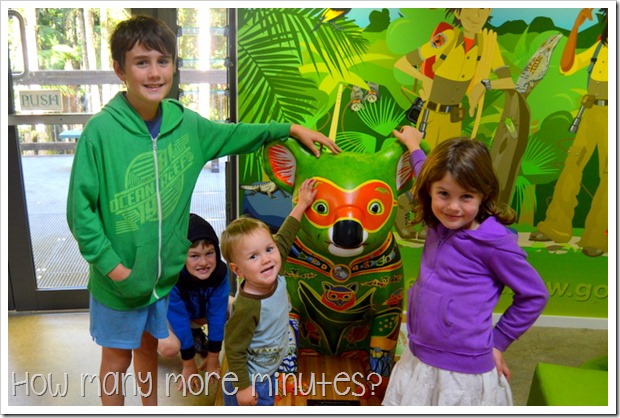 These are the last four we saw, at a service centre by the motorway.  They’re at the various fast food joints and the petrol station at the service centre.  We caught them on our way out of town the day we left the Port Macquarie area.  I loved the one on the top left.  It’s called Oceania. 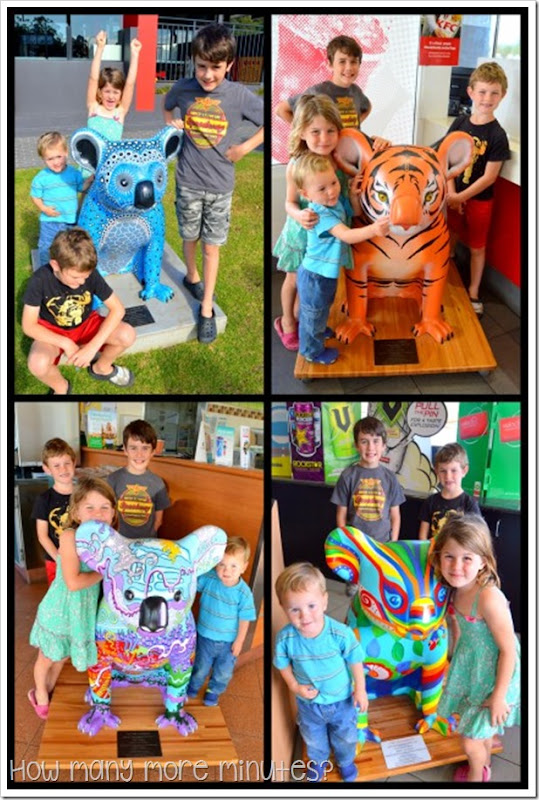 We almost didn’t get this zebra one, called Koala Z.  He’s at the local TAFE, which was closed on the day we went.  He’s behind the gate and we couldn’t get close.  A couple of days later we were driving through town and things suddenly looked familiar.  Sure enough, we were close by and got the photo.  The other three were at the Glasshouse, the local theatre in the CBD.  I’m glad it was open when we went since we found three koalas inside! 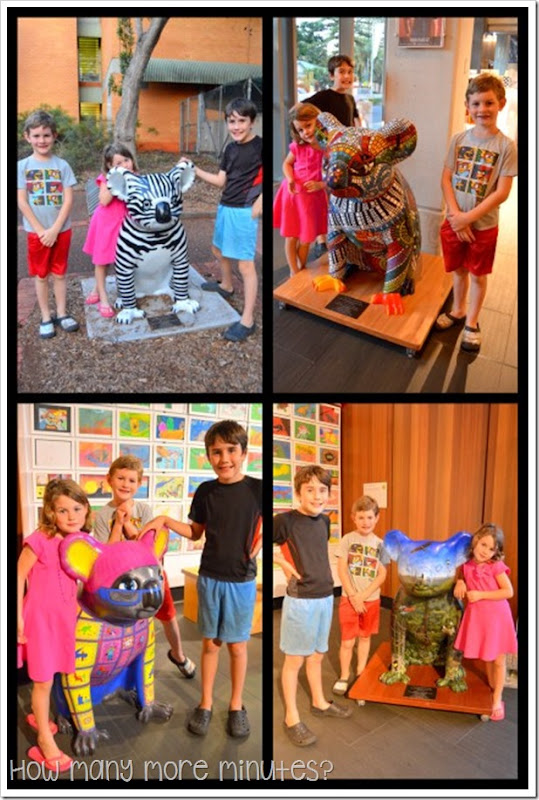 One of the days we went looking for koalas I only had two of the kids with me.  Miracle of miracles!  That lifesaver koala is Mack and he can be found at Macca’s.  Go figure.  The saucy lady in the bikini is Retro Rita.  The last two were in clubs.  As in gambling establishments/restaurants.  For adults.  Not really kid-friendly places.  At least they were in the lobbies so we didn’t have to go too far in! 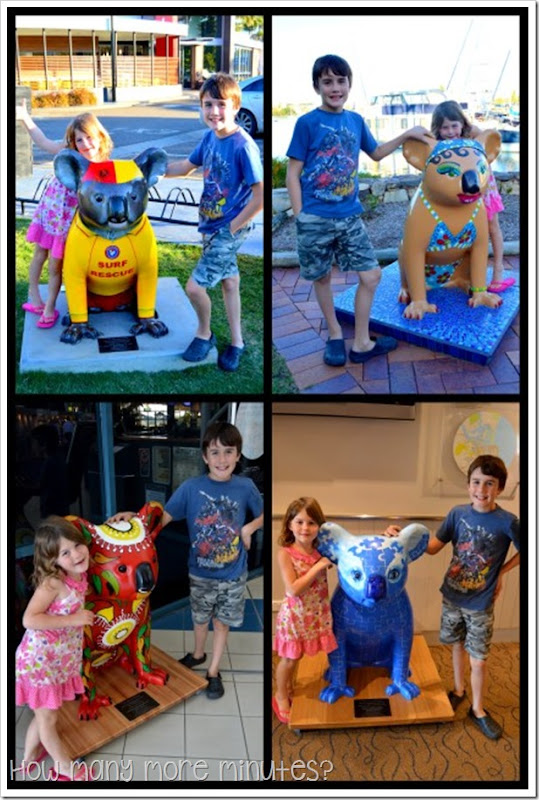 The last one in this picture is a special koala that only comes out for town meetings and such.  They have a few special koalas, they come out for sporting events and other community events.  They are pictured on the trail guide but aren’t always available for public viewing.  This one was at a golf course and was inside, we only just made it before it closed.  We were lucky to meet the artist there. 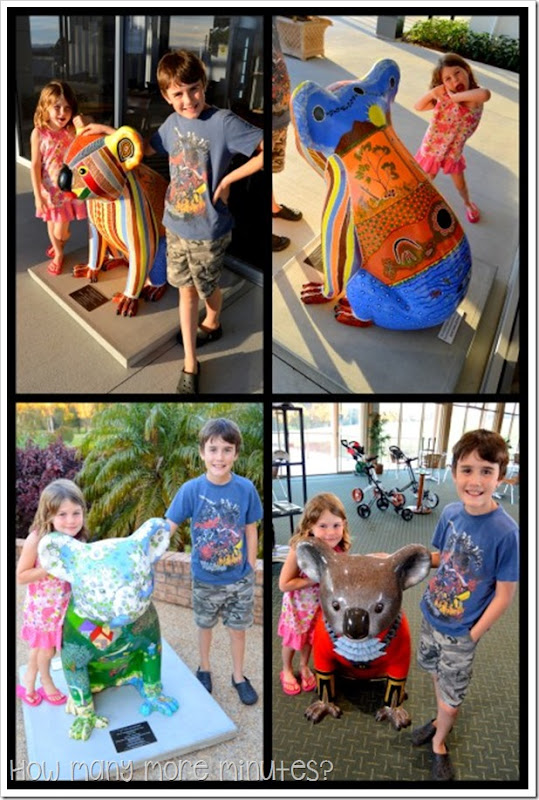 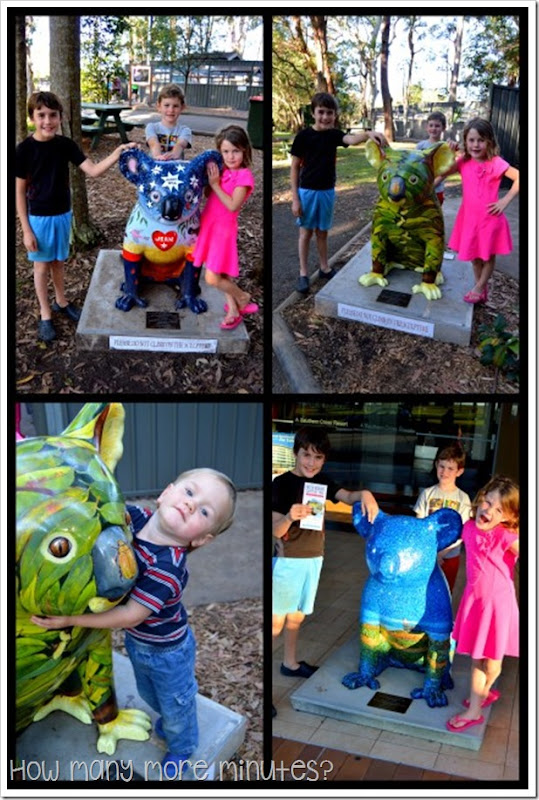 This first one has a beautiful view of the ocean!  We couldn’t get close to the last two since they were behind gates at museums that had closed for the day. 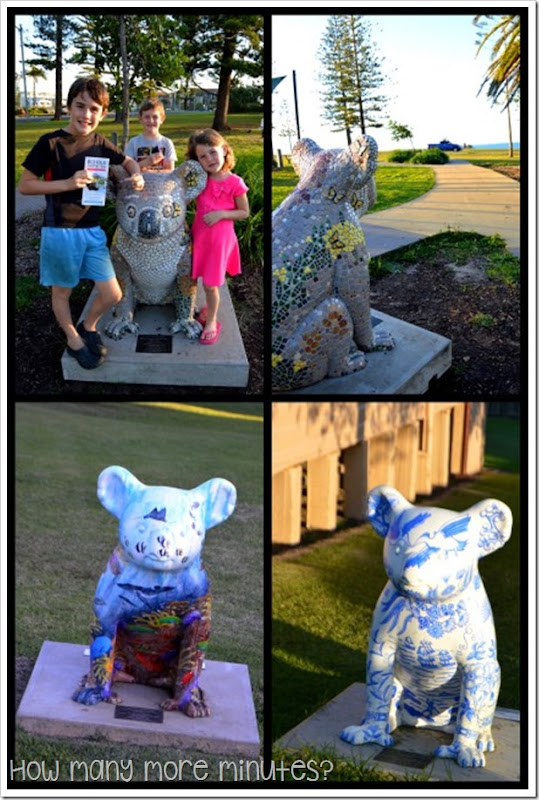 This one was at a caravan park.  It’s not the park we stayed at but it is in the same town, Bonny HIlls, just south of Port Macquarie.  The koala was gorgeous with beautiful sea creatures all over it. 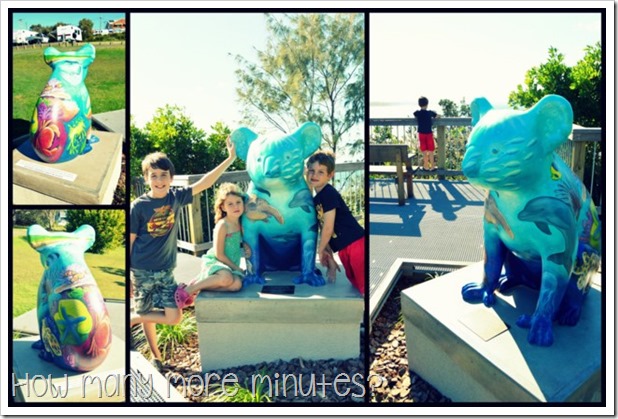 This one is my favourite.  It’s called ‘I’m no bear’.  Because koalas aren’t bears, but people often get that wrong.  See him wearing a panda costume?  Cute! 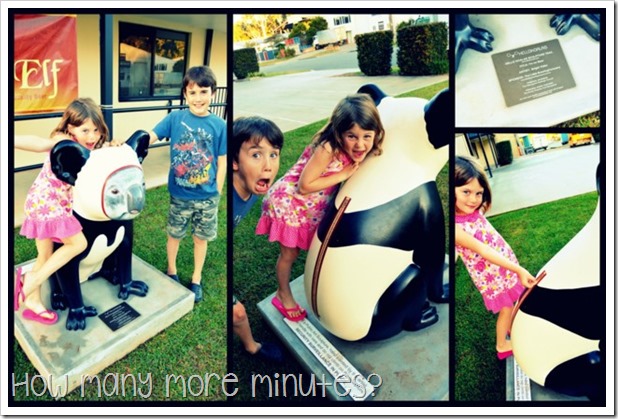 There were several all in one area near the CBD Foreshore.  We had a walk around to all of them and then treated the kids to some hot chips.  See how well that whole tourism thing works?  We wouldn’t have even been in the area otherwise. 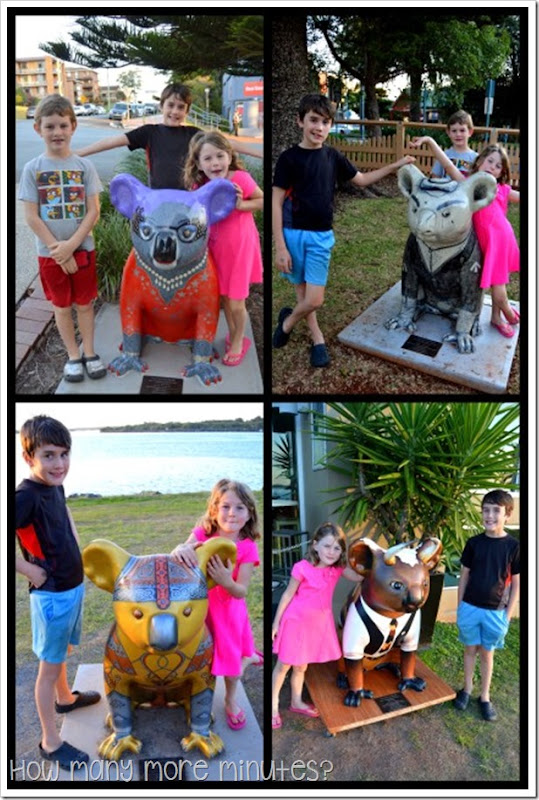 SkeeterBug’s favourite was The Cyclist.  The others had so many favourites that I forget who liked which one! 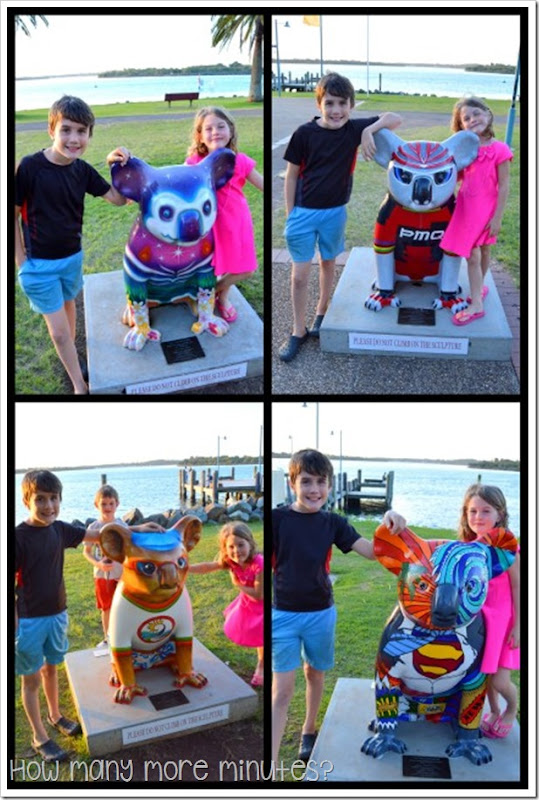 It cracks me up how JitterBug is in and out of these shots.  He was so interested in seeing them all but really didn’t care one way or the other whether he was in the pictures.  The other two needed photographic evidence that they were there! 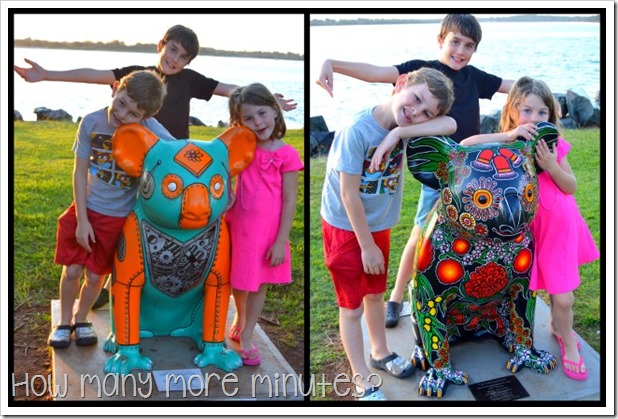 This was the view looking out at the water instead of the koalas.  😉 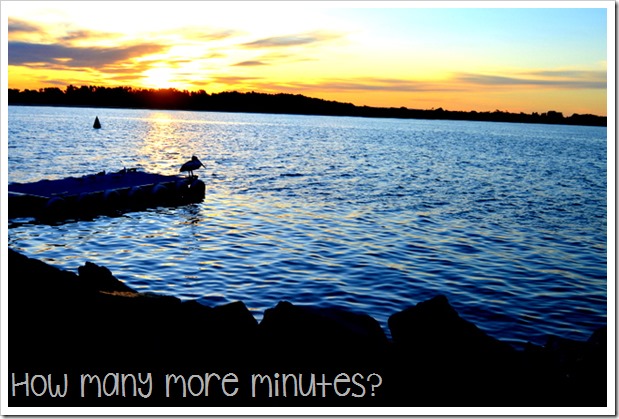 We were enamoured with this pelican up on the light pole.  Pelicans are rather large, but he managed to do some preening while he balanced up there. 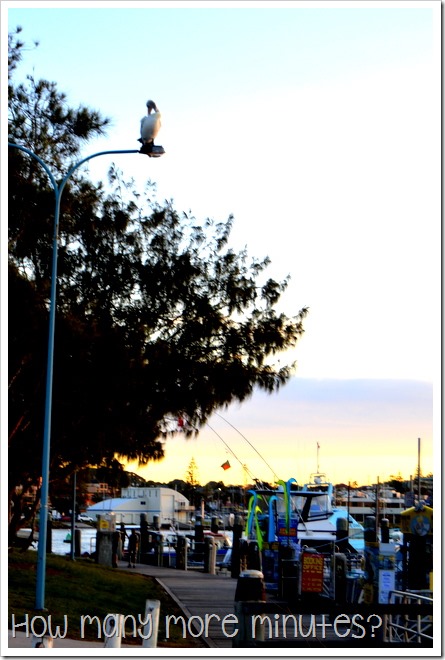 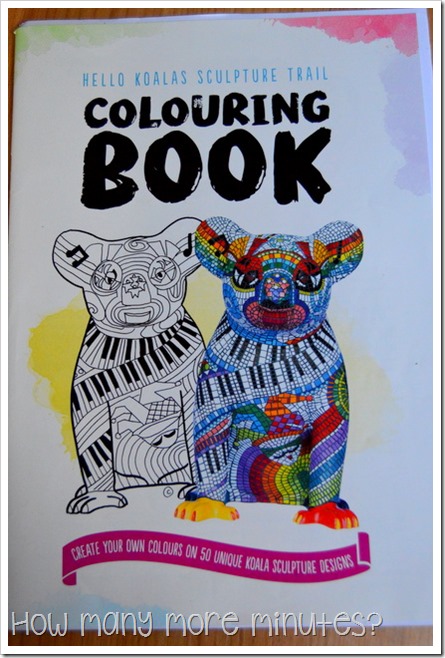 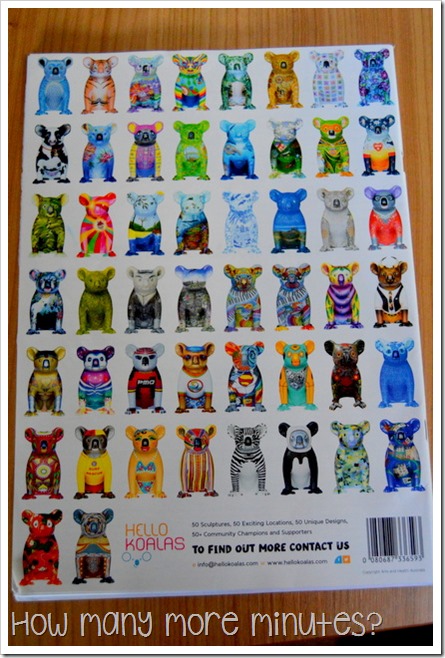 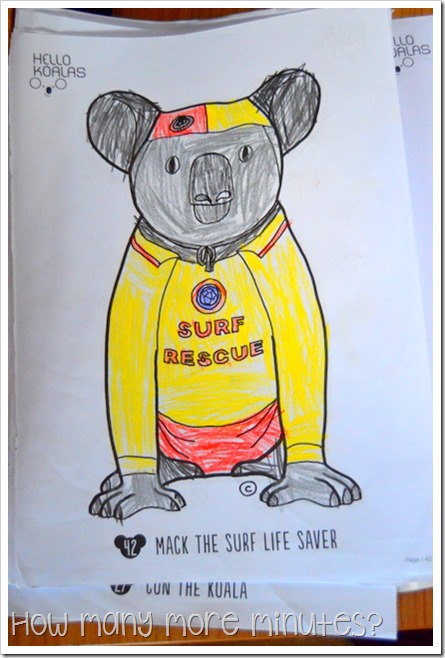 The koala trail left me with a lovely impression of Port Macquarie.  We saw more of the area than we otherwise would have.  If we’d stayed longer we might have even gotten pictures of all the koalas!  Still, we saw more than thirty of them, which we were thrilled with and had great fun doing.

We moved out of our house the end of September last year.  We spent about...