While we were staying in Hastings Point we drove down to Byron Bay to visit the most eastern point on the Australian mainland.  It’s at the Cape Byron lighthouse, which is a state conservation area and a really popular spot, especially on the weekend!  We drove up to the top only to find it too crowded to park.  We were lucky to find a spot not too far down the drive so we were able to easily walk up to the lighthouse and nearby trail. 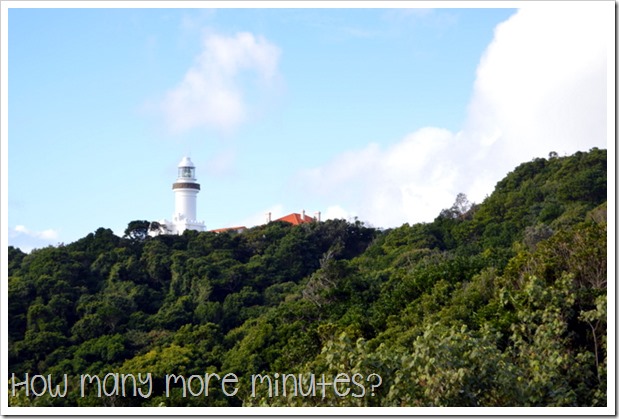 The view of the beach is stunning.  See the kite surfers?  (Is that what they’re called?  I’ve no idea.) 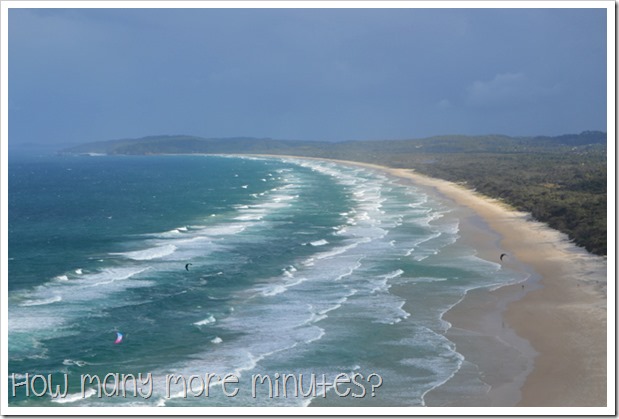 Look at this!  So beautiful!  Definitely one of the most beautiful lighthouse locations I’ve ever visited.  This was an ideal spot for whale watching, and we saw people doing just that.  We didn’t spot any while we were there, though we did see some dolphins. 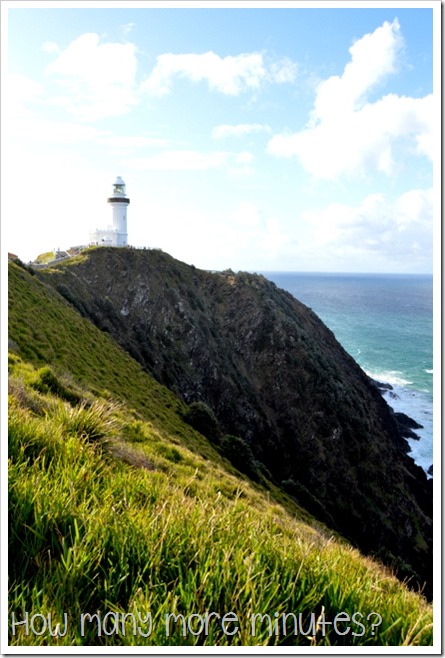 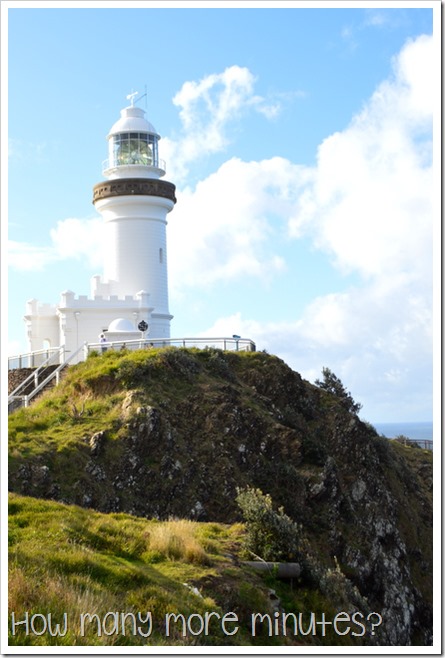 See that spot on the ground that looks like something has been removed? We wondered what used to be here and later found a sign with a picture showing that this is where the original flagstaff was. 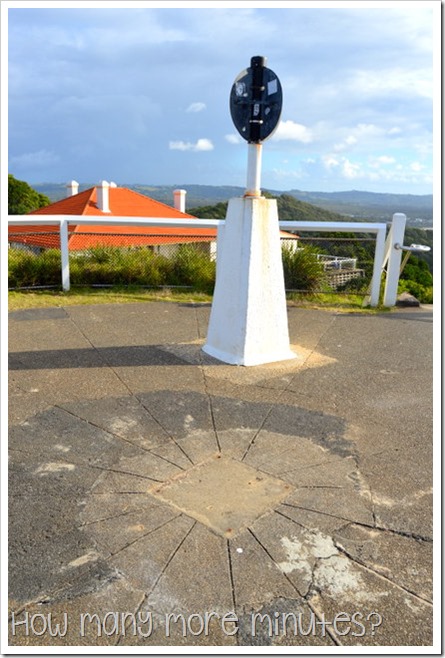 ‘National’ parks in Australia are managed by the states.  Which means each state charges its own fees, so the pass we got in Tasmania (for example) doesn’t work in New South Wales.  Nice.  Many national parks are free to get into.  At this conservation area there would have been a fee to park at the top by the lighthouse.  Since it was full and we ended up walking in and we didn’t have to pay. [Sidenote:  Weeks after we left NSW my kids remembered that the lyrebird was on the NSW parks sign.  How do they remember these things?] 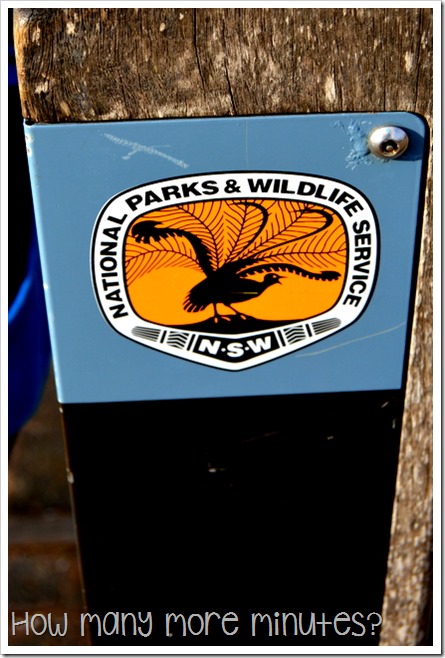 What a view.  Those swirly patterns in the water were amazing. 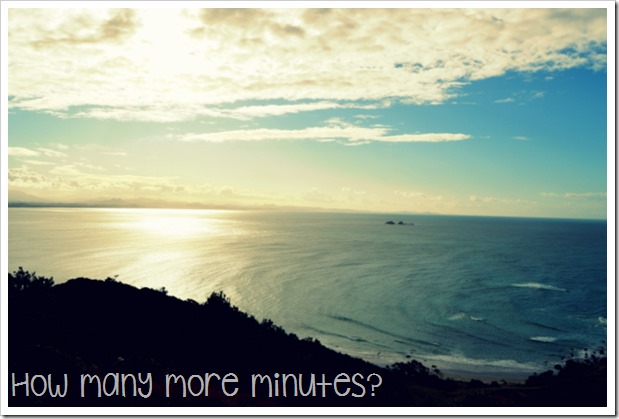 Here it is!  The most easterly point of the Australian mainland!  A very photographed sign. 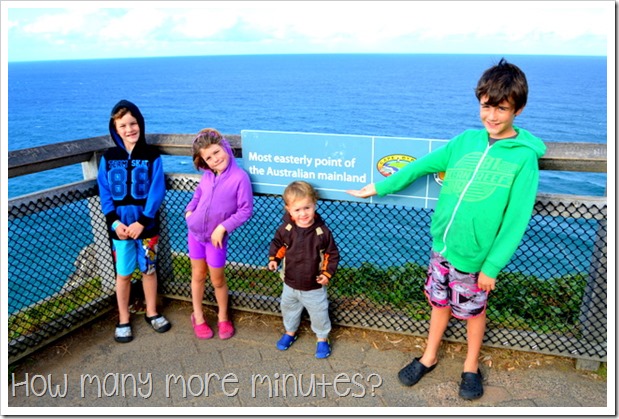 Poor TurboBug was so upset as we were trying to take this picture.  He kept saying ‘Up!’ but when we tried to pick him up he made it known that that was not what he wanted. After several minutes we finally figured out he wanted his hood up.  All his siblings had theirs up at that point (it was windy!) and he wanted his up just like them.  He was much happier after that. 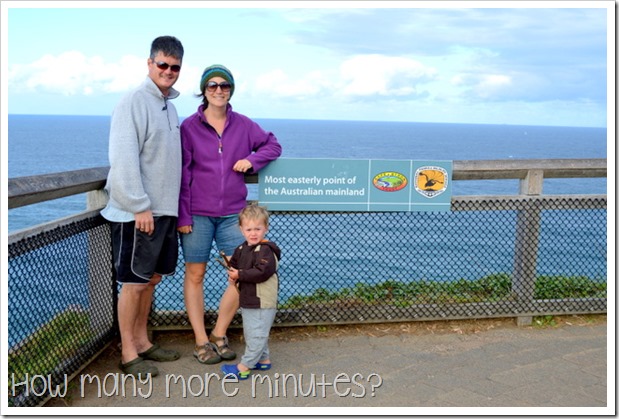 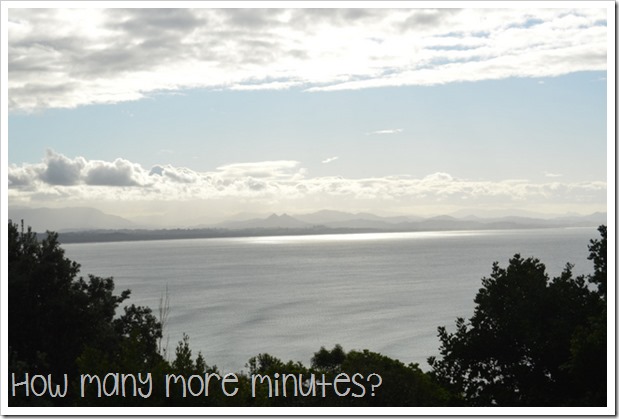 And the lighthouse.  It’s amazing I got pictures with very few or no people in them, given the number of people there that afternoon! 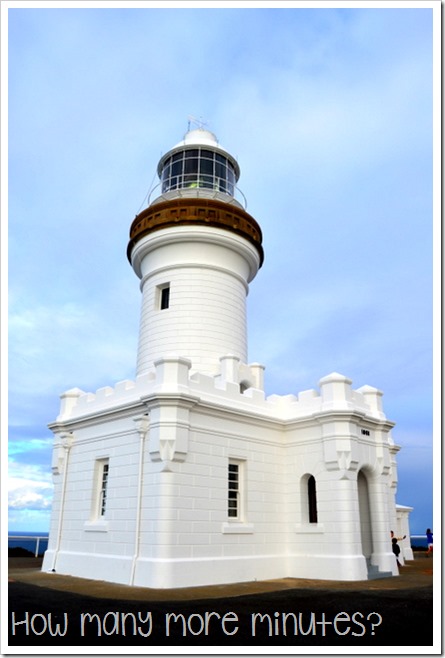 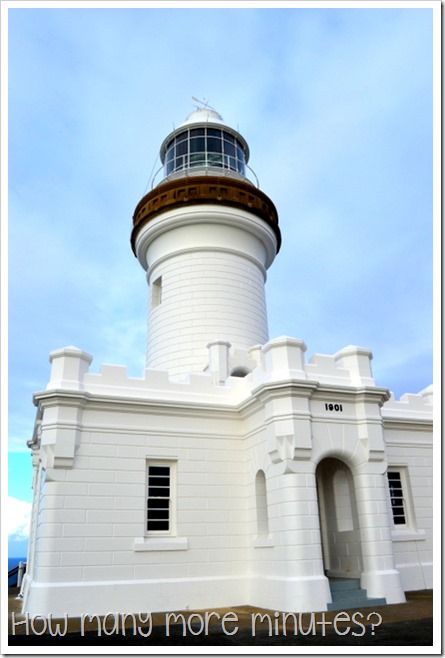 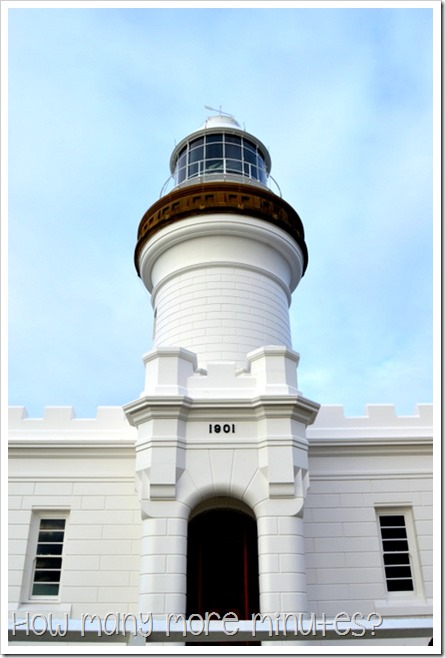 Isn’t it gorgeous?  So well maintained. 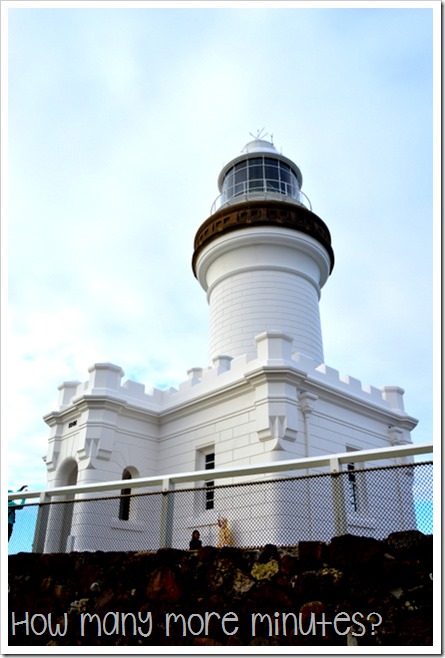 In the old lighthouse keeper’s office is a museum and gallery.  Heaps of information, lots to peruse.  There’s even art for sale.  See the flagstaff in the picture below? 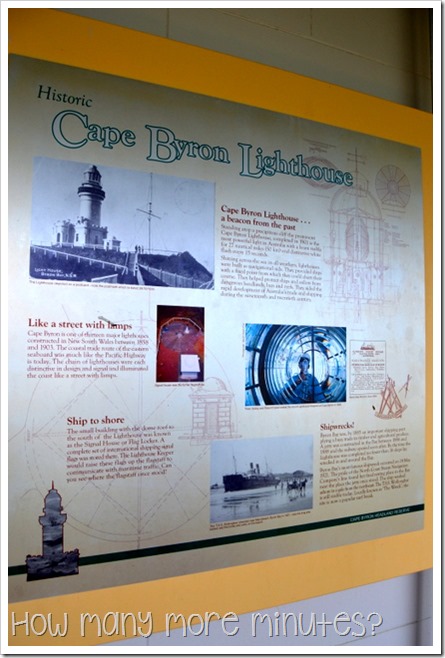 Some nearby rocks have a really cool name.  ;)  (It’s a family name.  Nope, not our JitterBug.) 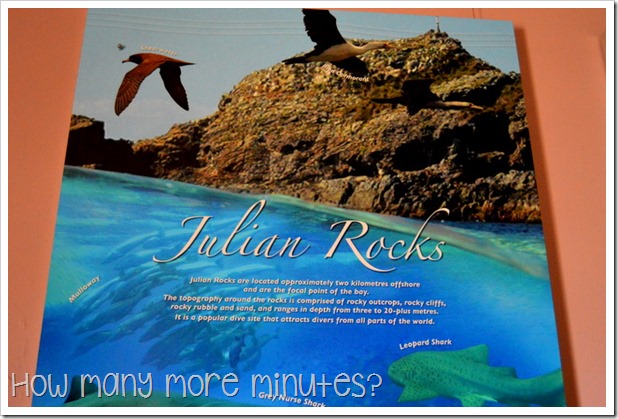 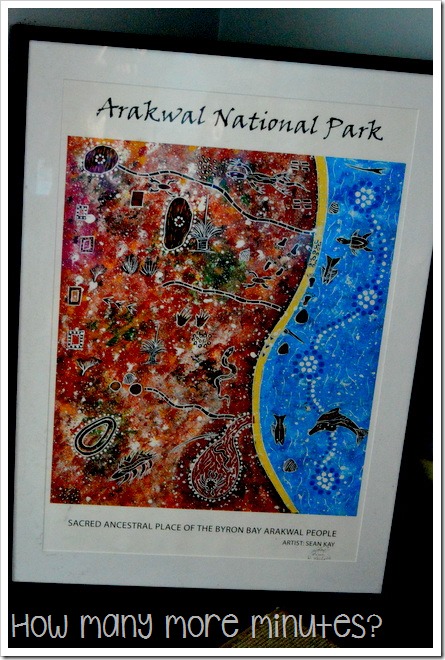 Another reference to Captain Cook… 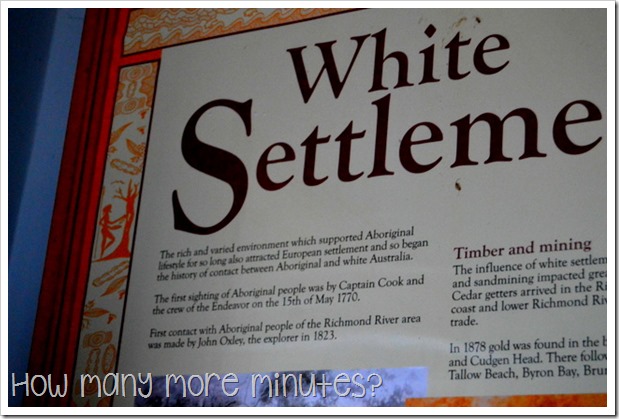 There was information about the symbolism of this painting and it was lovely.  Of course I don’t remember the details. 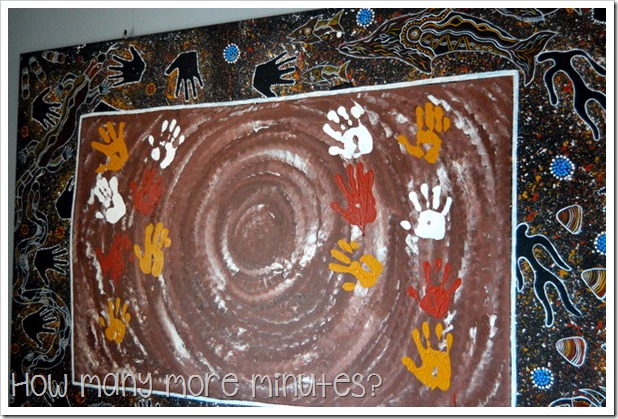 That view, one more time! 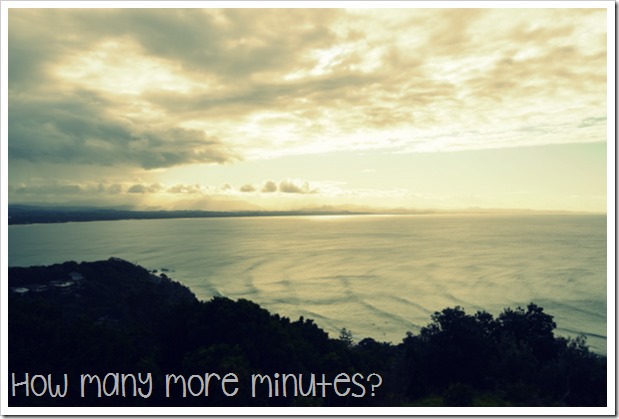 We didn’t spend any time in the town of Byron Bay, but just driving through it  has a lovely beach town feel to it even in the winter.  It was the weekend, so it was crowded.  Can’t imagine it in the summer!