A flashback from April!  We spent a couple of nights in Junee to visit the Junee Licorice & Chocolate Factory and the Junee Roundhouse Museum.  It seemed like all the other travellers only spent one night.  They’d arrive midday and visit both of these places that afternoon, then they were off in the morning.  The ease of travelling without kids!  Visiting both attractions the same day would have been too much for us, especially with a toddler.  We chose to visit the licorice factory the day we arrived.  The factory is in the old flour mill which they have restored.  Isn’t it gorgeous?  We learned that when they started the restoration there were pigeon droppings half a metre high from years and years of pigeons roosting in the empty building. 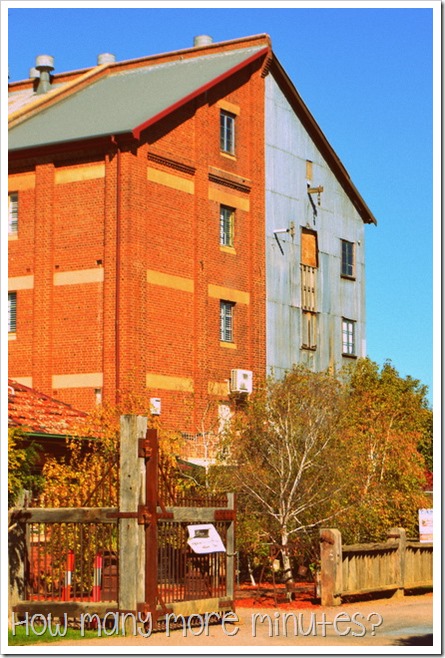 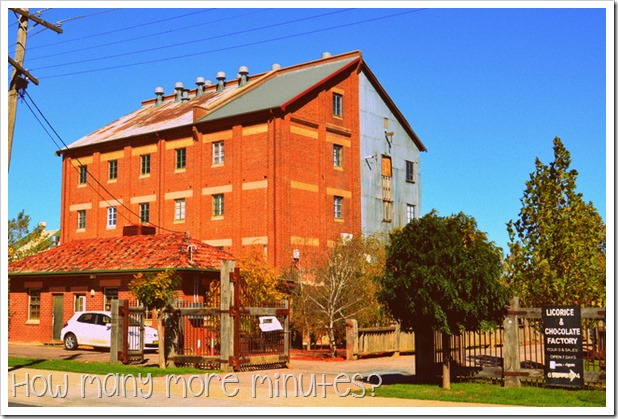 They’ve done such a good job fixing the place up, there’s just such a lovely feel about it. 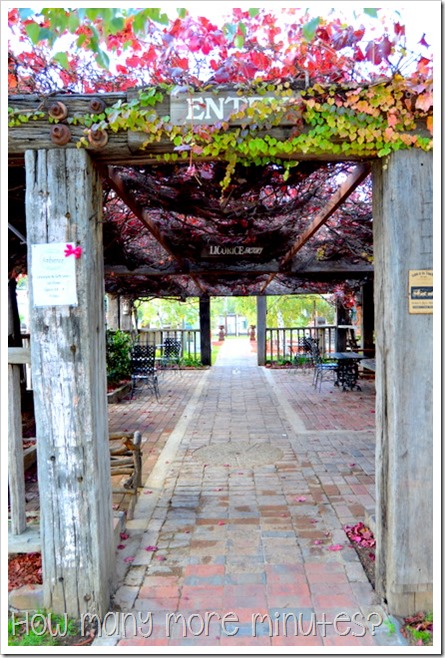 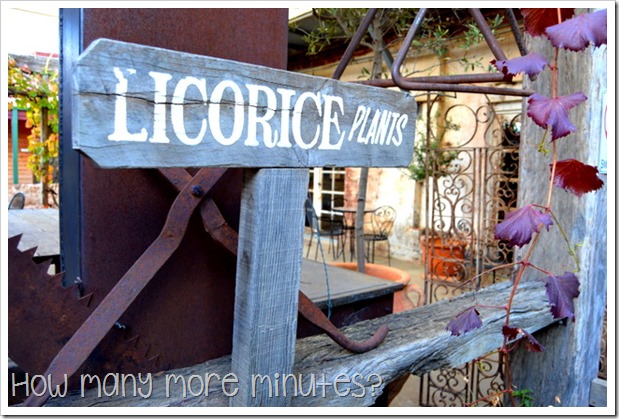 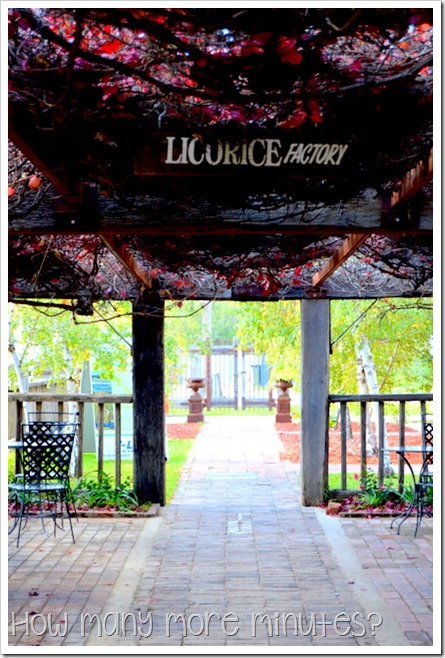 You can wander about on your own, there’s a cafe and a restaurant and you can see the licorice being made.  There’s another shop upstairs which was a hidden gem, selling a broad assortment of items from kitchenware to crocs to wooden toys.  We chose to do the tour of the factory so we could find out all about the process.  We were fascinated watching the licorice come out in these lovely straight lines.  It was carried on a conveyor all the way through the main room (in a tunnel complete with viewing windows) and into the cutting room on the other side.  They even hold a Guinness world record for the longest continuous licorice rope.  It was 612m long and they had more than 700 volunteers holding it! 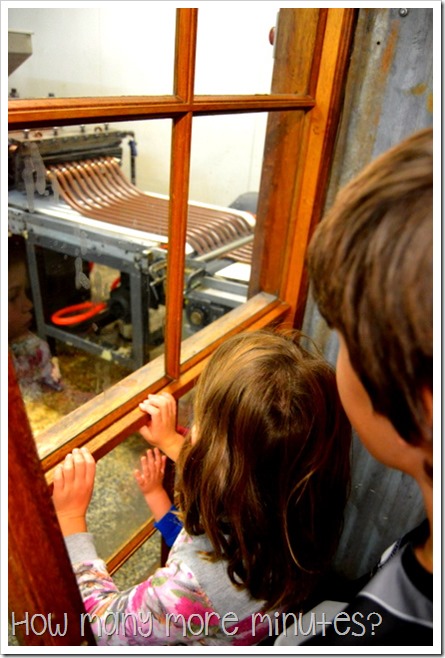 The licorice doesn’t look so pretty when it drops into the machine that makes it into those beautiful lines, but the kids loved watching this part.  We were there at the right time of day to see them stop the machine, clean it, and start a new batch.  They make black licorice and raspberry licorice, the machine has to be cleaned between each run. 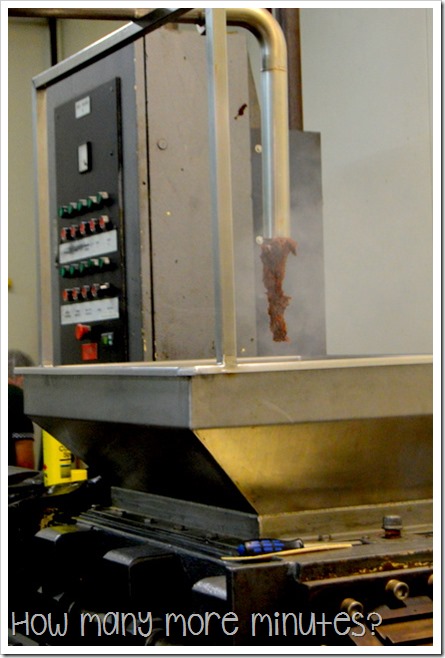 Licorice has many medicinal properties that are lost in modern production.  Some substances used are synthetic, so if you aren’t getting organic licorice you really aren’t getting real licorice at all.  The root of the licorice plant is 50 times sweeter than cane sugar!  The botanical name actually means ‘sweet root’.  They are very proud of their organic licorice here, the tour guide seemed to have a real pride in the company and she hadn’t even been there all that long.  Licorice can boost the immune system, act as a mild pain reliever, aid endurance, activate the pancreas, strengthen the respiratory system, aid digestion, cure ulcers, and even fight tooth decay!  So tuck in!  (Yes, I copied that list from the sign below, but you can also read about it on their website.) 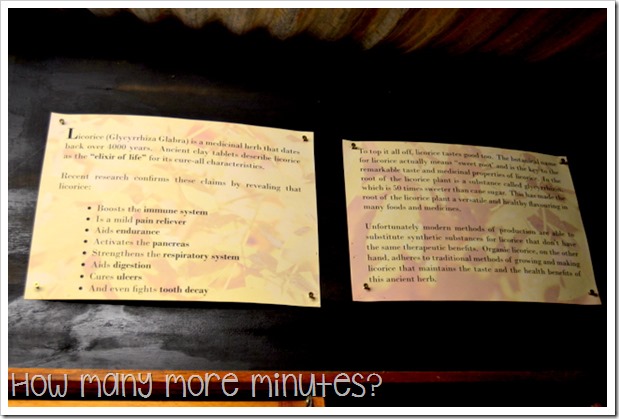 This is the cutting room.  It was operating when we got there so we got a taste of how loud it was.  As I mentioned before, they stopped production while they switched flavours so it was quiet for awhile.  You could sure tell when it started up again! 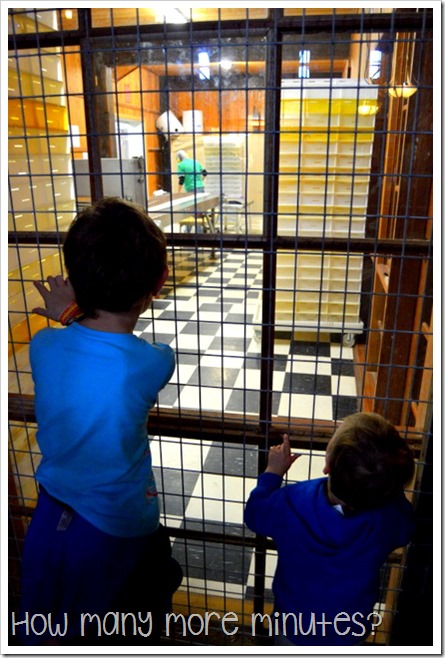 It was a bit hypnotising to watch.  The machine cuts it all into uniform-sized pieces and the employees shovel it all into bins.  See the earmuffs?  It was quite loud, even through the windows. 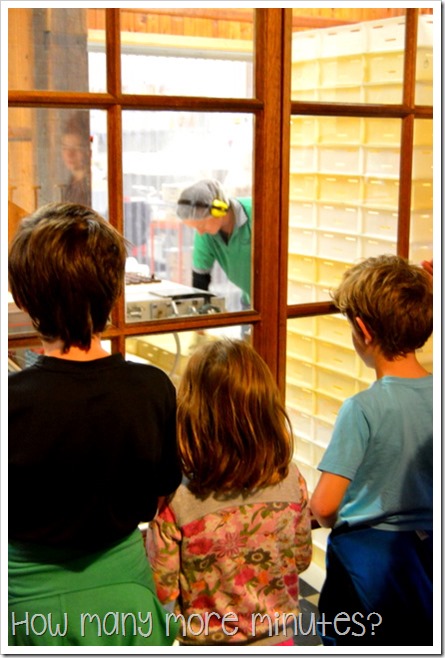 After the cutting room the licorice is coated in chocolate.  Well, not all of it, they do sell some that is not chocolate coated.  This is the huge machine that does the chocolate coating.  They use Organic Belgian styled coverture chocolate which uses the whole cacao bean and gives a very smooth and full-flavoured chocolate.  They even claim numerous health benefits for this pure chocolate! I think this machine had a name (like Vicki or something), it was very special to them.  We watched as it tumbled the chocolate so that it would have the perfect coating.  It weighs the chocolate that is added and adds it slowly, one coat at a time with proper drying times in between. 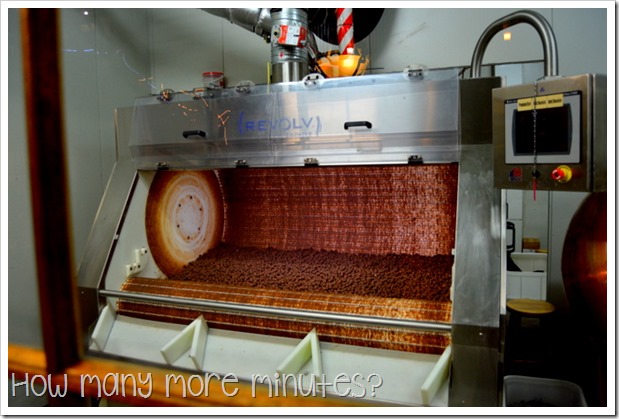 They sell a wide variety of chocolate covered products: nuts, fruit, and even coffee beans. 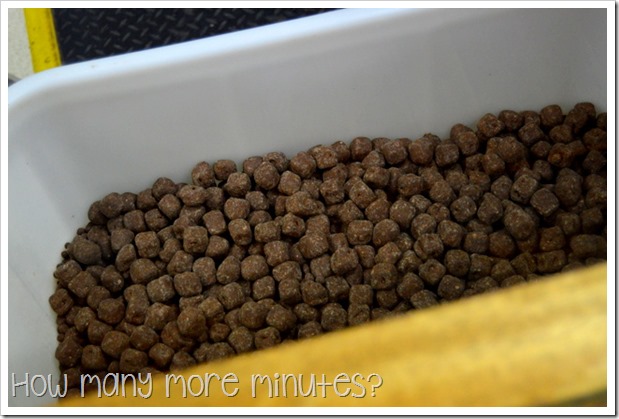 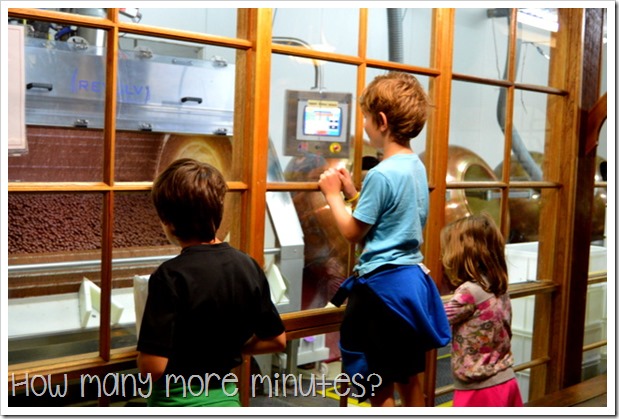 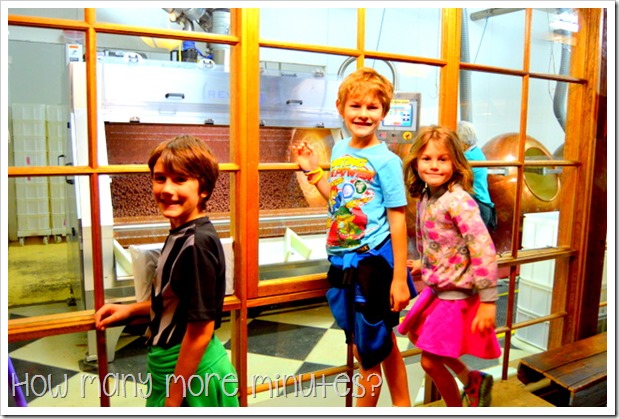 These other tumblers were for smaller batches, I think there were three.  One of them had white chocolate.  During the tour a lovely man brought out some chocolate frogs for the kids.  Much better than those other chocolate frogs you get at the supermarket.  :)  He was careful to ask if they had any allergies, since their equipment processes products with nuts. 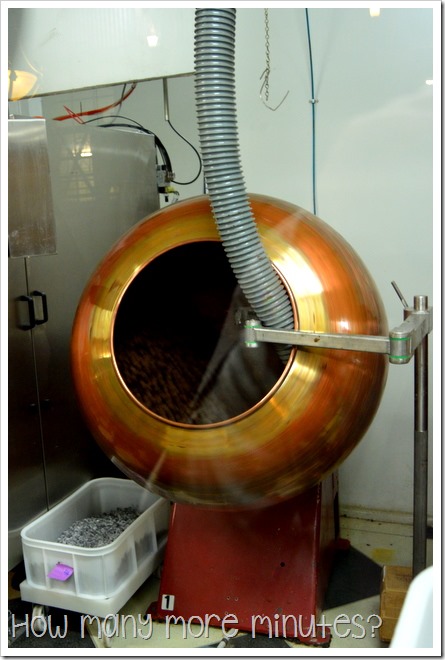 There was a bit of fun at the end of the tour- Vertical Licorice Bowling.  See that black ball that SkeeterBug (10) is holding up?  That’s a ball of licorice.  We had to throw it through a hole at the top of this structure and it would fall through the shoot to knock down the skittles (bowling pins).  The high score won a box of delicious licorice, our tour guide gave us an extra since some of the kids had problems getting the ball into the chute.  That licorice ball was very hard, we had to really watch as the kids threw, a couple of times it ended up down the hallway.  Our tour guide left us to it after a promise to return the ball when we were done, they’ve had a few go missing in the past.  Which means there are people out there with giant, grubby balls of licorice in their homes.  Why? 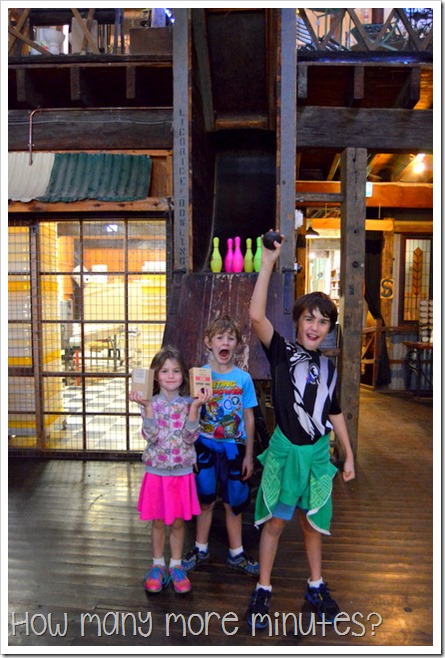 Did I mention the giant freckles?  Before the tour the kids all donned their special hats and went right into one of the chocolate-making rooms.  Here they had the pleasure of pouring warm, liquid chocolate from a jug onto a plate and covering it with as many sprinkles as they could stand.  At the end of the tour we collected the freckles to much delight. 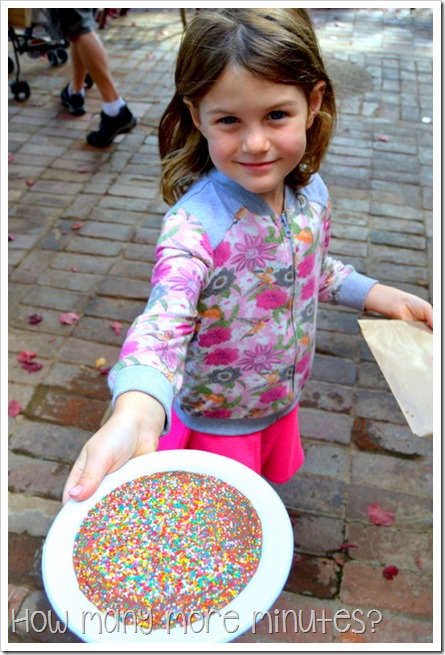 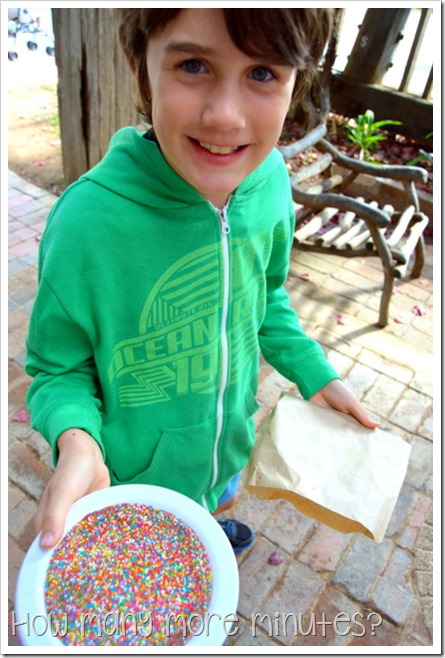 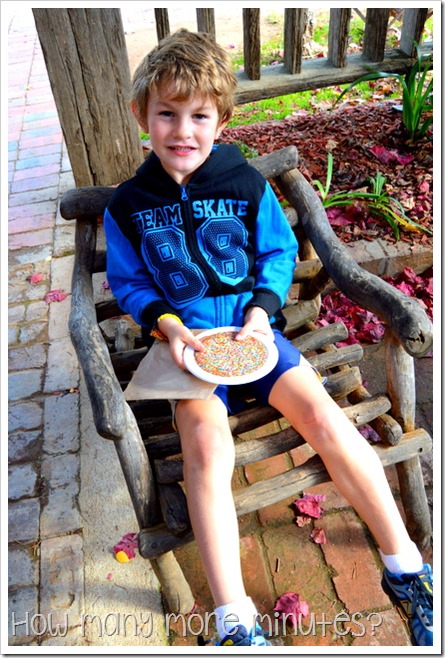 Don’t worry, TurboBug had one too but by the end of the tour he was out cold.  He was quite funny about making the freckles, he had one of those toddler moments where he just froze and only wanted to watch.  I expected he’d be all over making them, but no, he was more nervous about his surroundings than anything.  Maybe it was the hats.  In the window was a beautiful chocolate train they’d made, he was excited to see that.  It’s also the room where they make their gorgeous smash cakes, you can see pictures of them here. 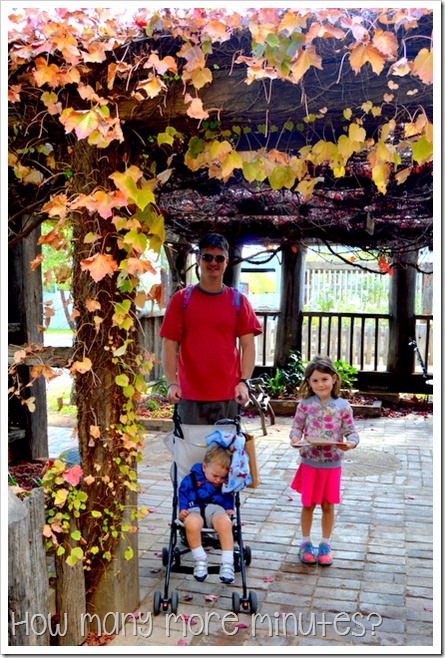 I don’t have as many pictures from this place as I thought I did, I must have been too busy enjoying it all.  Or chasing a toddler.  We bought a few things from the shop and even went back before we left Junee to buy some more licorice!  It’s incredibly good, we may have to order some from their online shop as we haven’t seen it in any stores.  This has been one of our favourite stops on our trip.

Port Macquarie has this great thing, a koala trail called Hello Koalas.  There are about...