With our Melbourne Museum membership there are several museums around the country that we can get into for free.  I think there were three in Sydney, but we only went to the Powerhouse Museum.  We came straight to Sydney from Canberra and we were all museum-ed out.  :)  We weren’t quite sure what to expect a this museum, they have everything from a hands-on science section to a history of underwear display to a Wiggles exhibit.  Quite the variety.  To get to the museum we had to ride two trains and the light rail.  That’s a lot of travelling and moving around with four kids!  They did great, though, and did really well sticking by us and enjoying the travels. One room  at the museum (the transport gallery, I think) had a train section.  We spent a lot of time in that room. 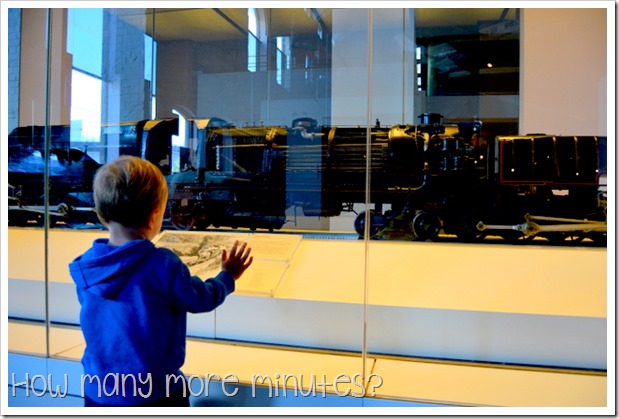 Complete with a real train! 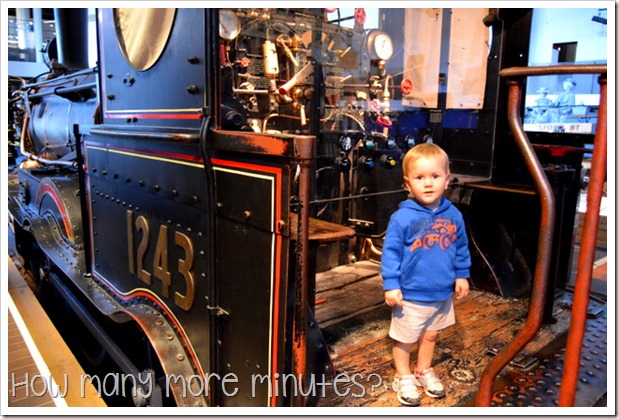 They’d even made a platform that looked like an old train station complete with old signage.  I don’t have a picture, in fact I’ve realised I don’t have a lot of pictures from the museum.  I was too busy chasing a toddler and just enjoying the museum with the kids. 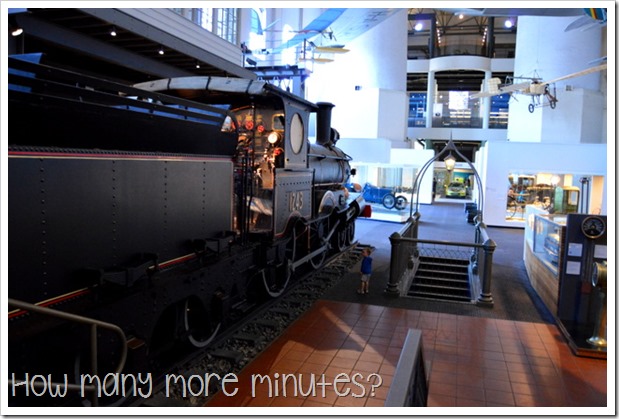 The space exhibit was really cool.  Lots of info on how astronauts live in space.  The highlight was the Zero Gravity Space Lab, which spins around you and gives you an illusion of weightlessness while you listen to the astronauts talk about living in space. 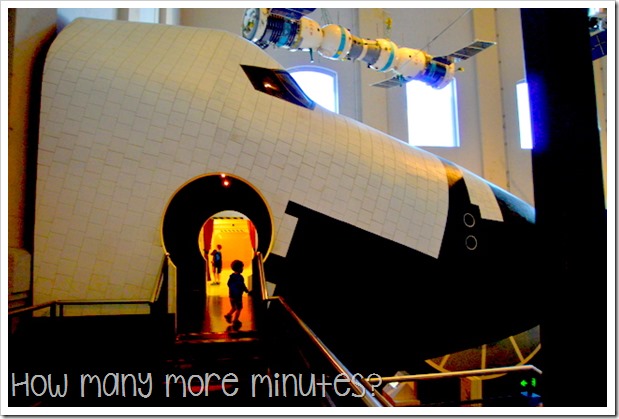 We also enjoyed the experimentations room, the hands-on section that has you experimenting with light, electricity, heat, and such.  JitterBug loved the plasma ball and stayed here for quite a while. 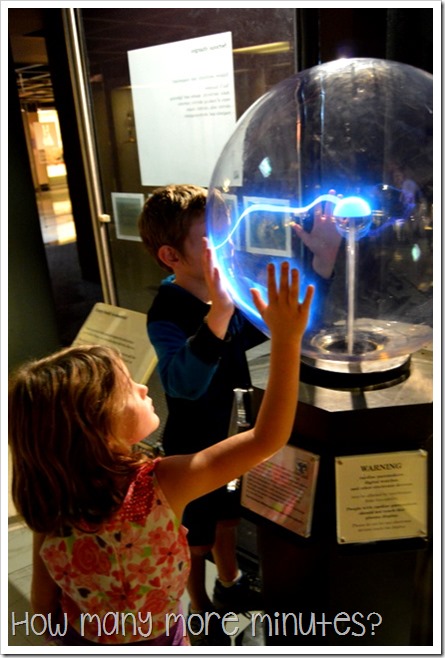 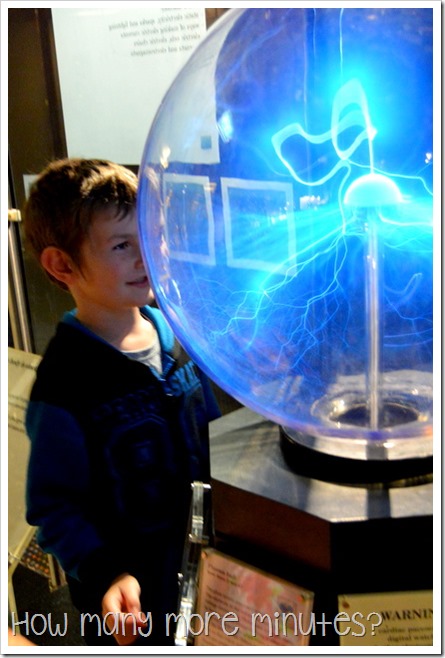 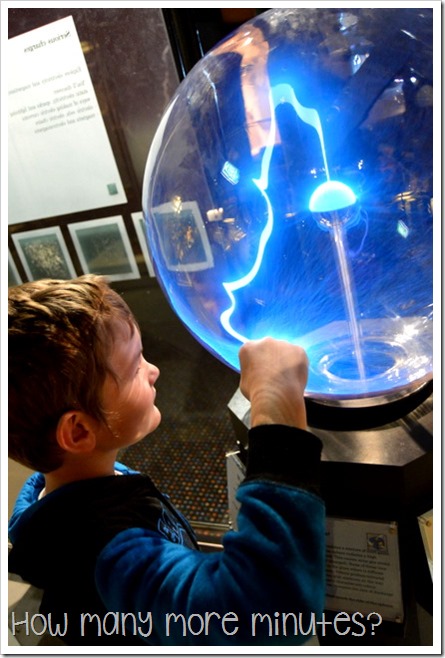 Right next to it was an activity where you had to pedal hard to make the lights and sounds work on the fire truck.  LadyBug waited very patiently for her turn on this one.  I do wish I had a few more pictures of this area, there were some neat exhibits. 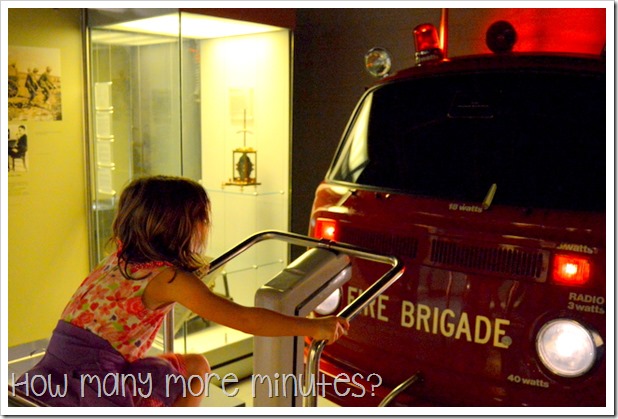 Then there was the Wiggles exhibit.  Believe it or not, my kids really don’t know the Wiggles that well.  We don’t watch the show and don’t know the music.  I think the kids may have seen a couple of episodes, but only recently.  That didn’t stop them from enjoying the Wiggles room!  Well, it was a bit young for the older kids so Dad took them to see something else for a while. 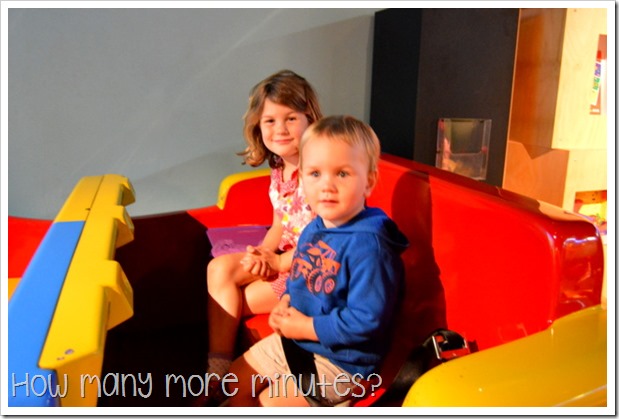 Right in front of this Big Red Car was a screen playing a video of the song Big Red Car on a loop.  As in, the same song over and over and over and over.  The song is repetitive to begin with, so that was a lot of Big Red Car.  In the video people wave as you drive by, so TurboBug was fascinated.  The car was often full of kids, but he stayed there long enough that I managed to get a picture of him alone in the car.  He did not want to leave! 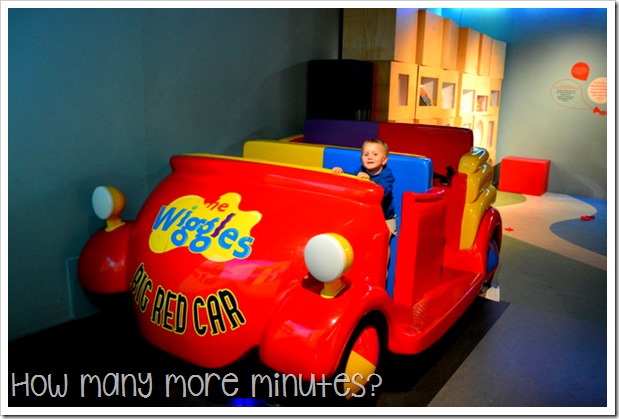 The other side of the exhibit had some kind of video game where you stood in front of the screen and it projected your silhouette into the game and you could smash some falling fruit.  I suppose it had a song to go with it.  The older three loved that game.  There was all kinds of Wiggles memorabilia and history about the group, and some other activities as well.  I still can’t work out the yellow Wiggle thing.  First a guy, then a girl, then a guy again, according to the information at the exhibit.  But we see the girl on tv now, so I have no idea. 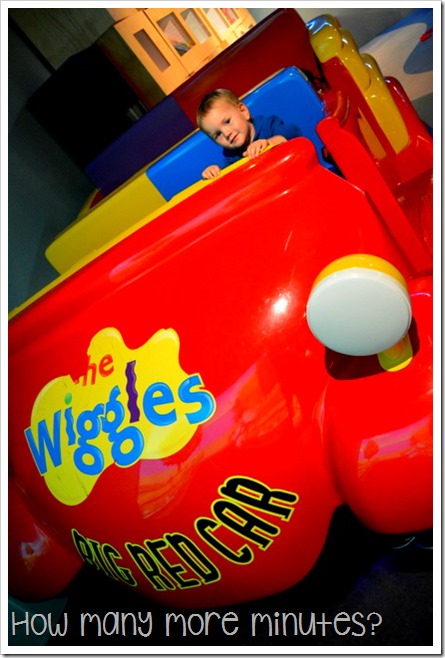 We stayed until closing time and still didn’t see everything.  There were sections on robots, steam engines, and global warming that we made it through briefly.  JitterBug left his camera in the Wiggles section but luckily someone turned it in.  Then we were off to ride the light rail and two trains to get home to our caravan!  That sounds like a lot, but we found we never had to wait long for a train and it was definitely easier than driving and finding parking.  There was a group camped next to us that drove in every day with their motorhome, I can’t imagine driving it into Sydney and trying to find a place to park!  It was a short walk to the train station, so that worked for us.

Port Macquarie has this great thing, a koala trail called Hello Koalas.  There are about...