Last year we were in America for Halloween.  The kids were beside themselves.  We went to some community event first, then to a friend’s neighbourhood for more trick or treating, complete with a visit from a headless horseman.  Since trick-or-treating isn’t really a thing here in Australia, I’d told the kids we’d dress up and do our own thing.  Then we found out that several of the other families staying in the caravan park were planning to trick-or-treat.  So then I had some excited kids again!  We had to come up with costumes so I printed off some masks for the kids to colour.  SkeeterBug (11) was a zombie, with orange stripes in his hair (because we had orange hair chalk and we just had to use it), and fake blood running down his arms and legs.  Lovely. 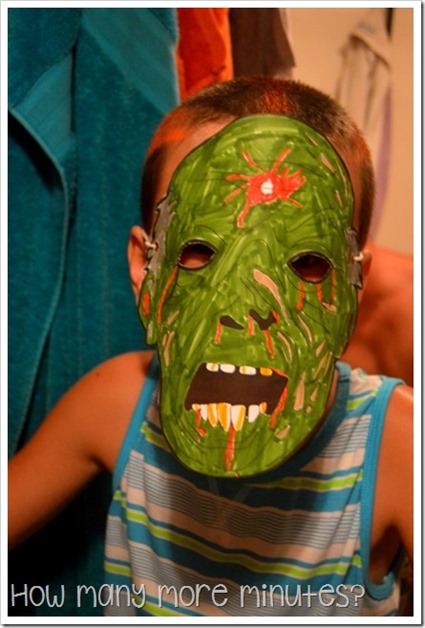 There’s that hair chalk.  Much easier to apply when they’ve had a haircut!  We were all in a rush as we thought the trick-or-treating was going to start at a certain time so we went for a quick swim, then discovered everyone was starting while we were in the pool! 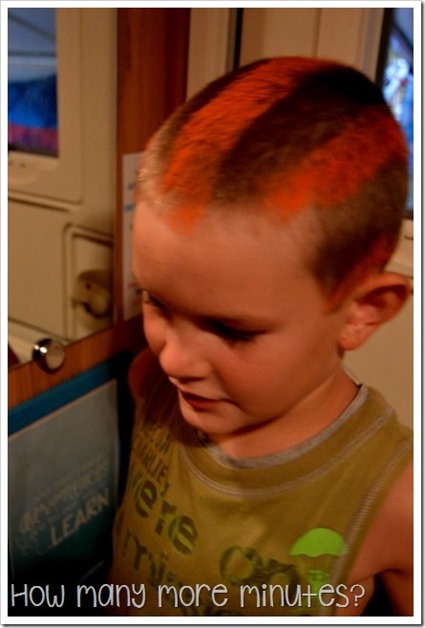 TurboBug had to have hair chalk too.  Because he has to keep up with his siblings.  See the freckles?  That’s because of LadyBug. 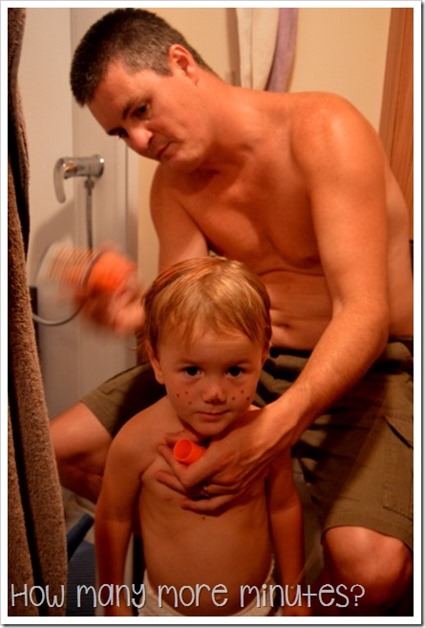 LadyBug (6) was the only one with a proper costume since she has her Elsa costume along on our trip.  She wanted freckles on her cheeks and we printed out a crown for her to wear.  She was Elsa last year too, I’ll have to find a picture and see how long this costume was on her back then.  Her hair is wet because of that quick swim we’d had to cool down after our camel ride. 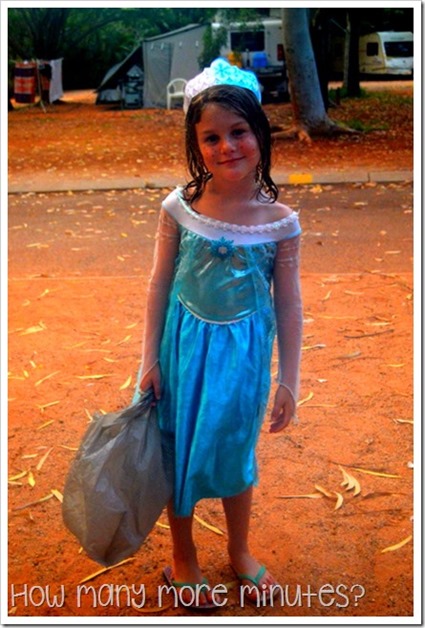 My camera lens fogged up when I took it outside.  JitterBug (8) is wearing the Boba Fett mask, or maybe it’s Jango Fett, I can never remember.  He’s got nerf guns tucked in his pants for weapons.  TurboBug (2) was supposed to be Sven, the reindeer from Frozen, but he ended up a combination of everyone else’s.  He’s got his reindeer ears, freckles, orange stripes in his hair, and fake blood on his arms and legs.  So he’s a reindeer/zombie/princess/bounty hunter.  Who had no clue what was going on.  🙂 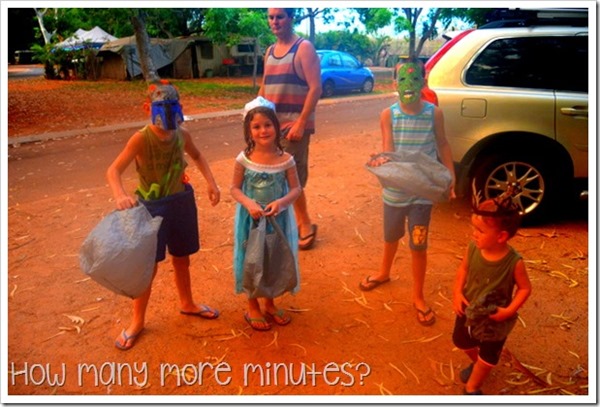 I tried to get some better pictures of them after all was said and done.  Here’s my zombie. 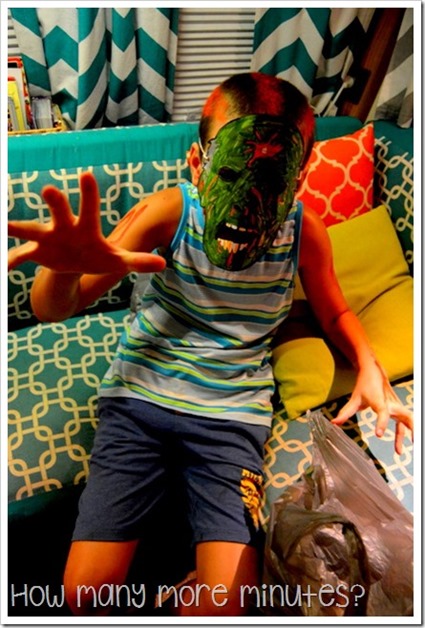 My princess, with freckles.  She already has adorable freckles but wanted more. 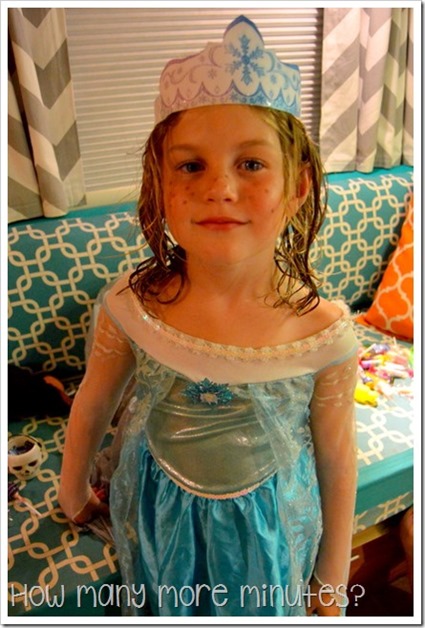 My bounty hunter, sans mask.  So basically just with blood and stripes in his hair. 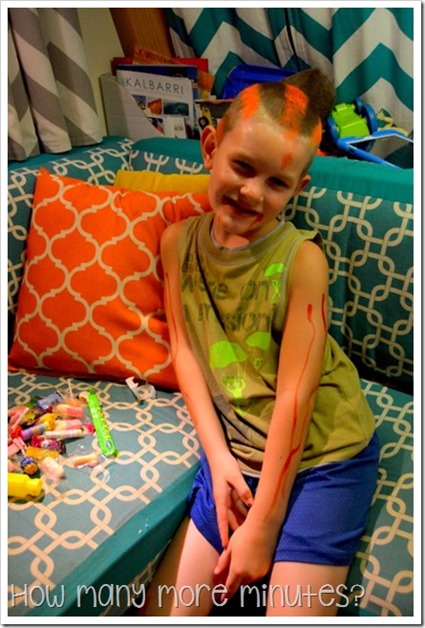 And my reindeer.  The older kids were horrified when I let TurboBug colour his reindeer ears because he was scribbling all over them.  They’re his ears, aren’t they?  I coloured proper colours right over the top of it but made sure his scribbles still showed through.  He still had no idea what was going on, but people were giving him lollies so what’s there to complain about? 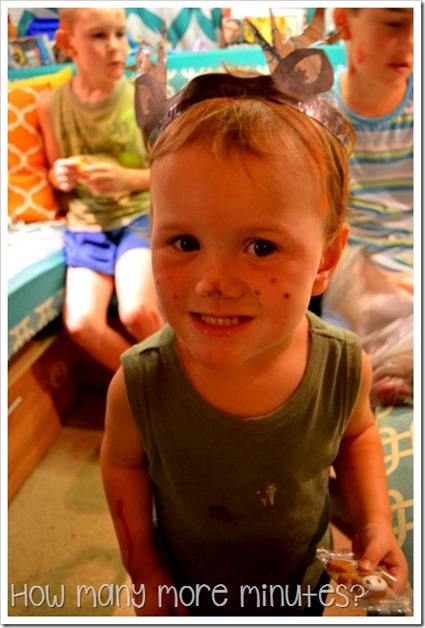 Trick or treating is not something I’d do in a neighbourhood here in Australia unless it was all arranged with the neighbours before hand.  Otherwise you’d end up knocking on people’s doors who wouldn’t want anything to do with Halloween.  They don’t know that trick of leaving the porch light on if you want to participate.  🙂

We always said we’d never get a caravan.  That’s not real camping, we said.  No... 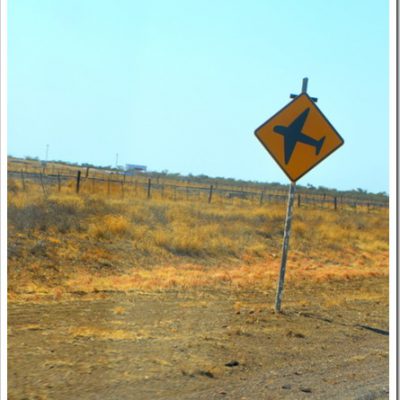 In Western Australia there are heaps of outdoor cinemas.  It seems that every town has... 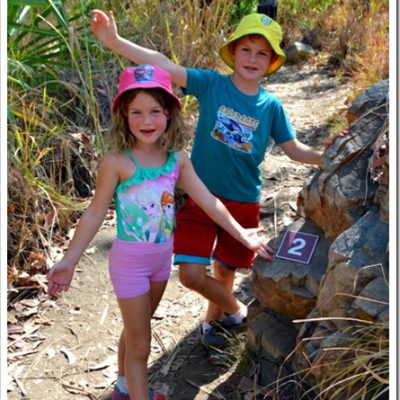 Emma Gorge has to be one of my favourite spots on this entire trip.  The...