Our last stop before Perth was Cervantes.  We had a few nights there before heading to Perth for the holidays.  Cervantes is a small town right on the coast, a couple of hours north of Perth.  There was a lovely playground just outside the caravan park.  Once school was out for the year quite a few families started showing up which was an odd feeling for us.  Most of the families we’ve seen in WA have been travelling down the coast like we are.  Now we are surrounded by holiday makers which gives everything a different feel. 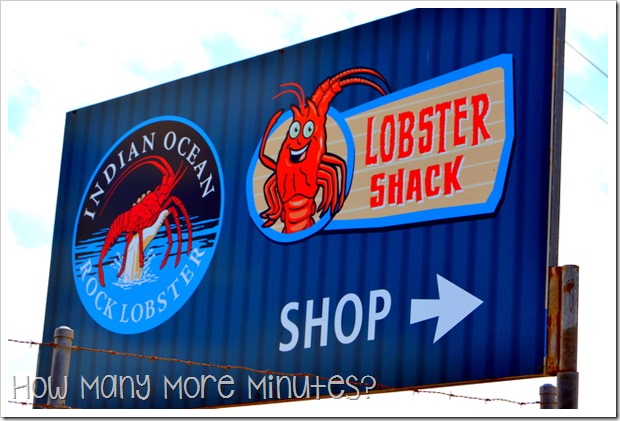 While in Cervantes we visited the Lobster Shack.  They have a self-guided factory tour.  Well, I suppose it’s not a factory but a processing plant.  We watched as they sorted the lobsters and learnt all about the process.  There was a quick video at the beginning, then they gave us the audio devices which had a kids setting.  There were several stops where you’d have to enter the number which kept them all nicely busy.  Even TurboBug had one, though he wouldn’t leave the buttons alone so I’m not sure how much he heard. 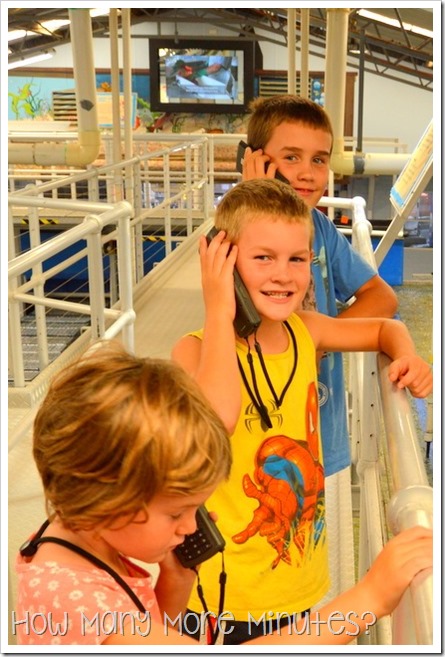 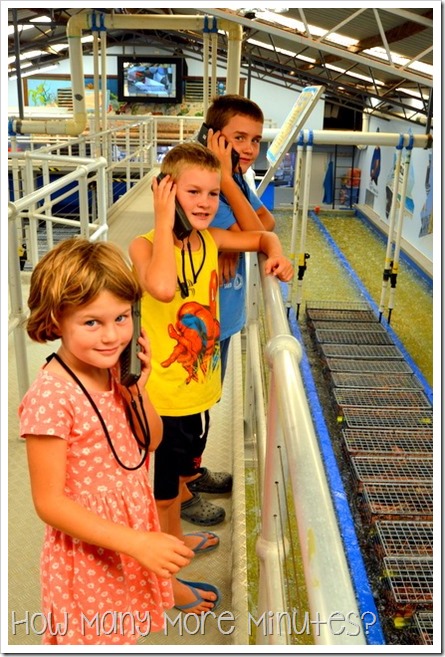 The artwork on the walls was incredible, all done by the same artist.  The lobster cages were sorted into lanes, some awaiting grading and others awaiting shipping. 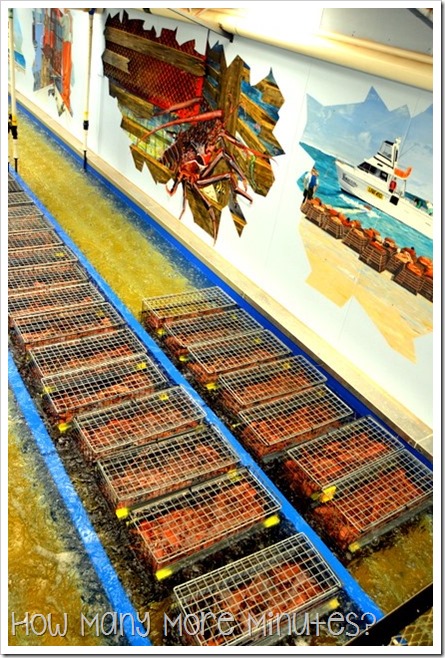 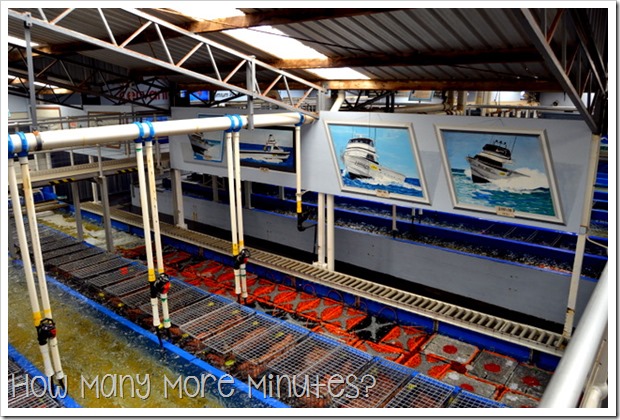 This was the sorting area.  The smallest is an A grade lobster, the largest an H.  We learned that different countries prefer different sizes, so all are in demand. 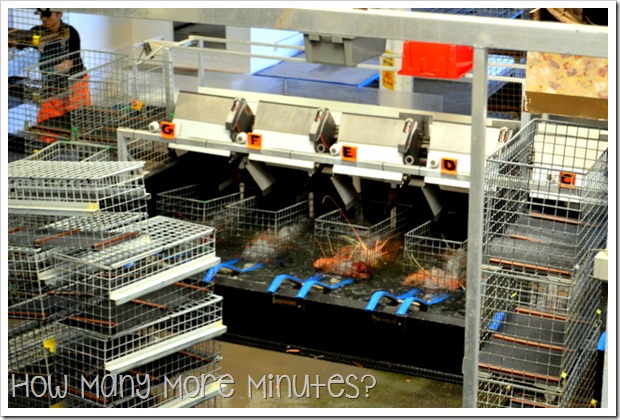 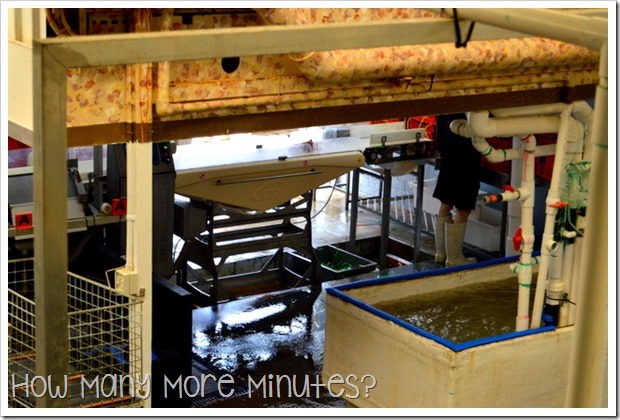 Here’s one moving down the belt, they drop automatically into the cages below.  When the cage fills up the lobsters collect on the belt until an empty one is in place. 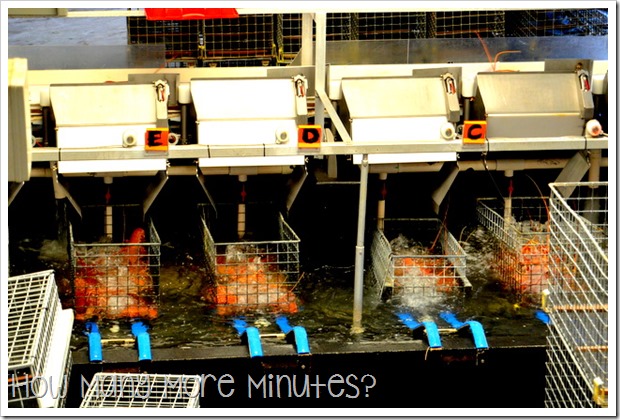 There was a video of the process which enabled you to get a closer look. 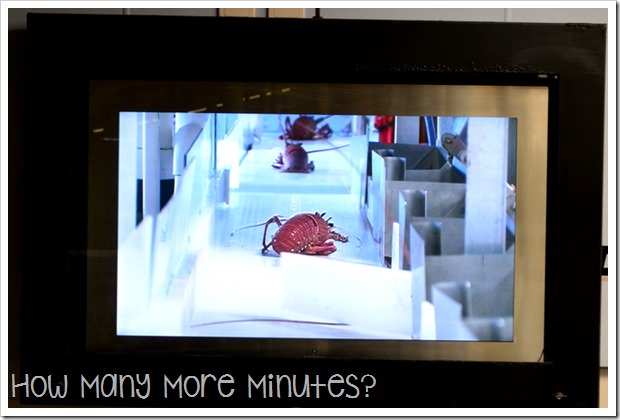 One of the guys brought over an H grade lobster, they can weigh up to 2.5 kilos.  That’s a lot of lobster.  🙂 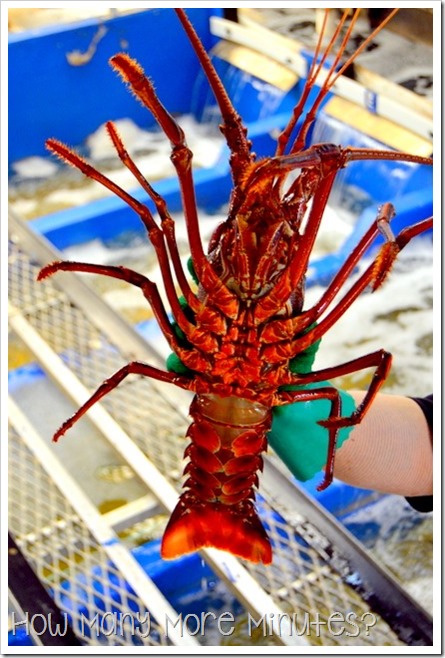 Once they’ve been sorted they sit in a holding area for a few days.  They aren’t fed during this time to prepare them for shipping.  They get the nutrients they need from the sea water that is pumped through the lanes. 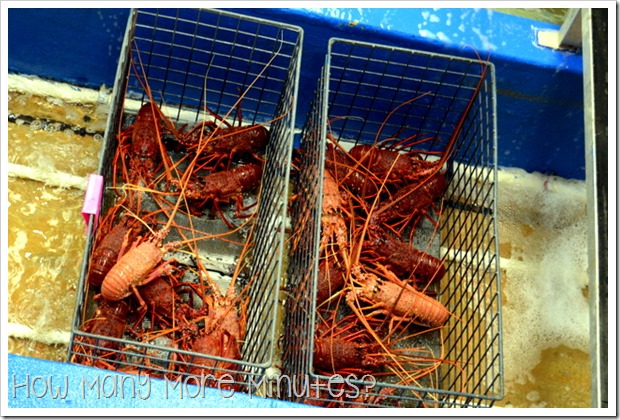 Even the flags were gorgeously done.  There were more than just these three, but the Aussie one was the only one with its own little lobster.  I think the flags represented the countries they export to. 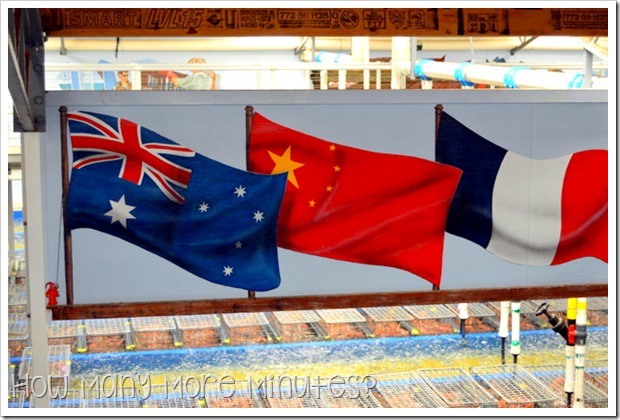 We finally had to get TurboBug(2) his own pair of colourful flip-flops.  (I mean thongs.  I still can’t call them that.) He kept stealing everyone else’s and even lost LadyBug’s last pair.  He had a pair of his own but they had the straps on the back so they just wouldn’t do.  He chose orange, aren’t they lovely? 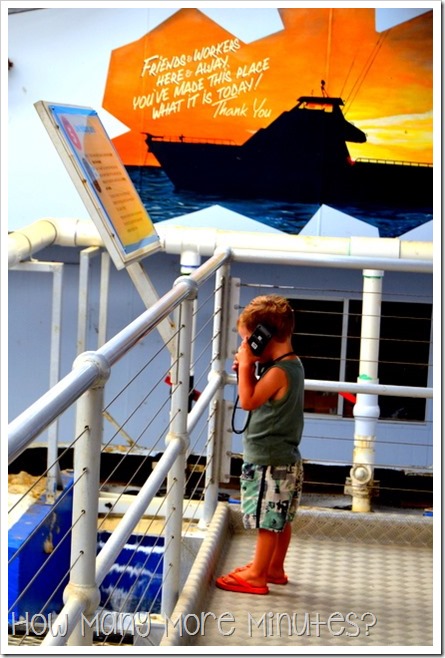 The shipping area wasn’t being used the day we were there but you could see the boxes they used for transport and the audio tour gave us info on the process. 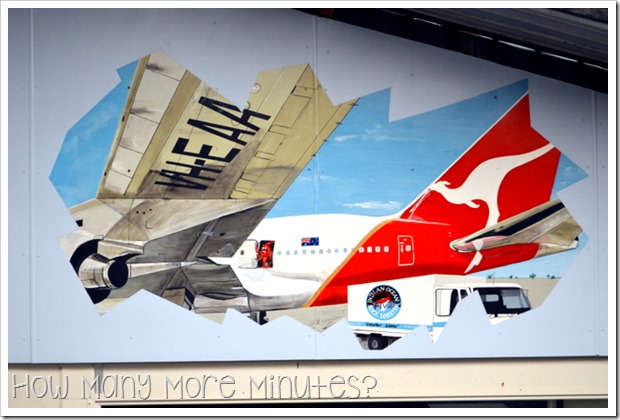 Of course we had to do the lobster pictures once we got back outside.  Lovely! 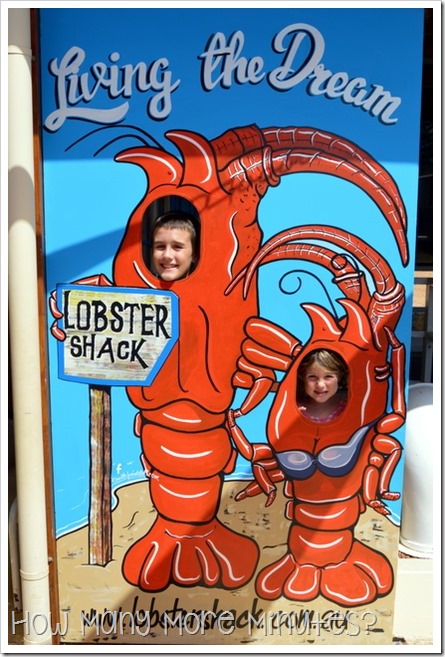 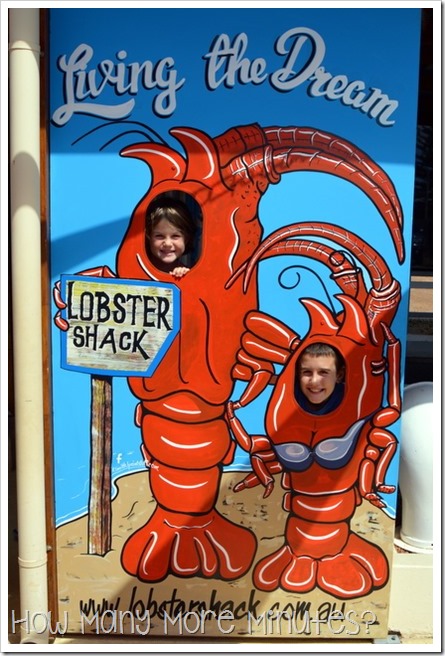 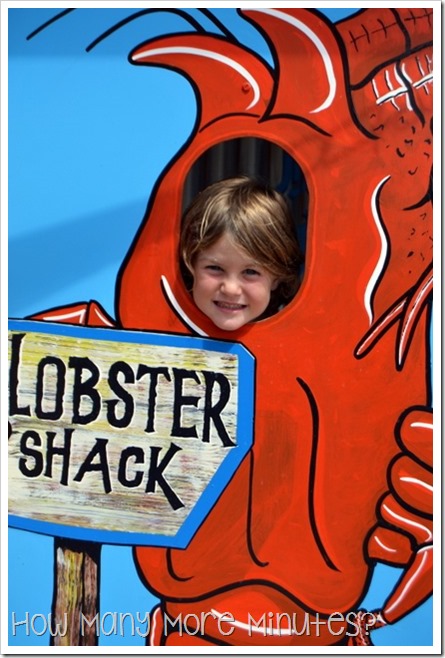 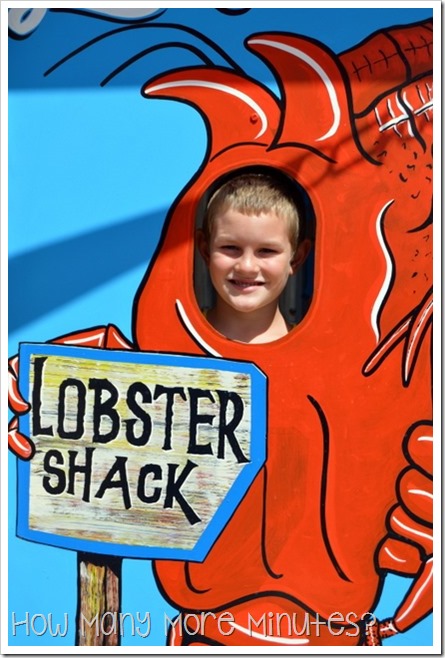 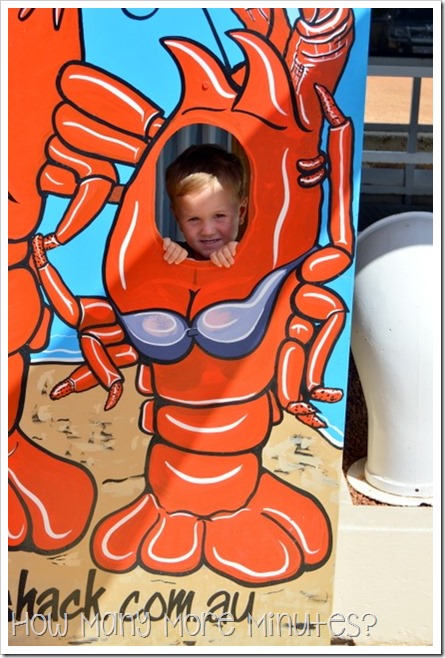 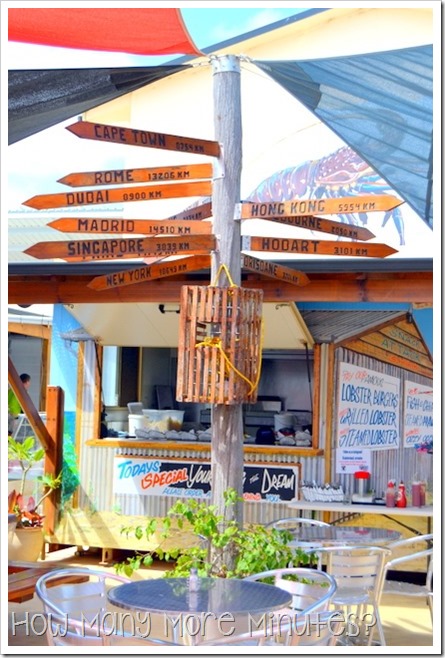 Really worth doing this tour if you ever find yourselves in Cervantes.  Since it was self-guided we stayed in there as long as we wanted, watching the sorting process for some time.  The walkway was elevated over the factory floor so we had a great view of everything.  We’d missed out on some lobster tours further north since the tourist season was over, so this was perfect.