After Mackay our next major stop was to be Longreach.  To break up the drive a bit we spent some time in Rubyvale.  We don’t often arrive at our destination after dark, but this night we did and during a lovely thunderstorm, too.  That made for some interesting driving.  We prefer not to be on the road at dusk because of the risk of kangaroos who are more active that time of day and thus more likely to become roadkill.  Throw a thunderstorm into the mix and it was some slow going.  We found out after we arrived that it was the first rain they’d had in about six months.  It was a lovely storm with lightning flashing across the sky, but the kids were much happier (and felt much safer) once we’d arrived at our destination. One of our stops for petrol was in the town of Capella.  It was memorable because of the Cobber the Cockatoo (if I’m remembering his name correctly!).  He was in a large cage outside the petrol station.  I went over to have a look and wondered if he could talk.  When I said hello to him he started bobbing his head up and down and said ‘Hello darling’ and ‘Hello love’.  He was adorable.  We all got out and said hello to him. Did you know there is an area of Queensland called The Gemfields?  There are towns called Emerald and Sapphire in the area.  We picked Rubyvale as a stop on our journey so that we would have the chance to do some fossicking.  We paid for a huge bag of rocks (they had it all set up at the caravan park) and went to work. 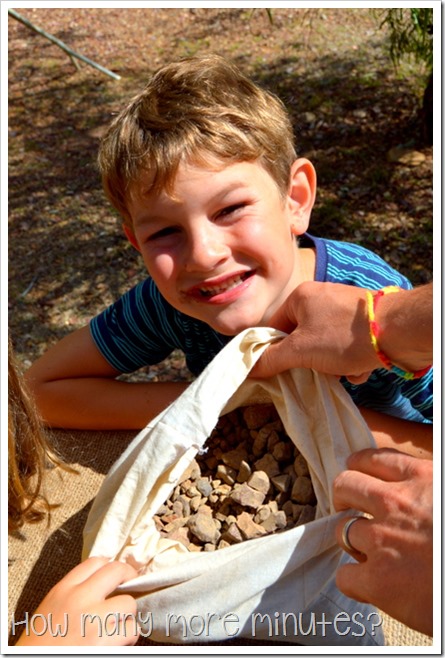 We were working under the watchful eye of a kookaburra.  We could hear their laughs echoing through the trees.  TurboBug happily points out kookaburras now and insisted we go over and have a look at this one. 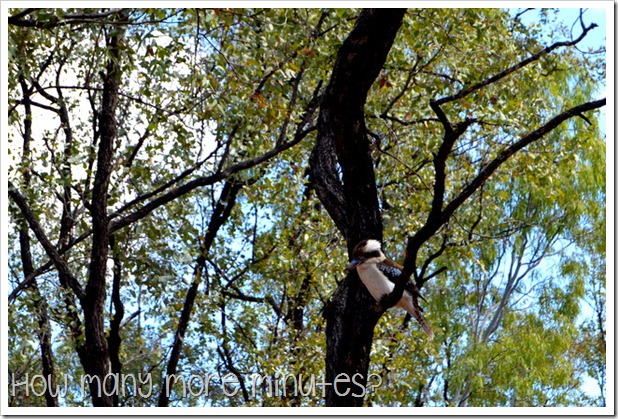 The first step was to pour the rocks into the pan.  It has two layers, the smaller rocks fall through the top pan into the bottom to make them easier to sort through. 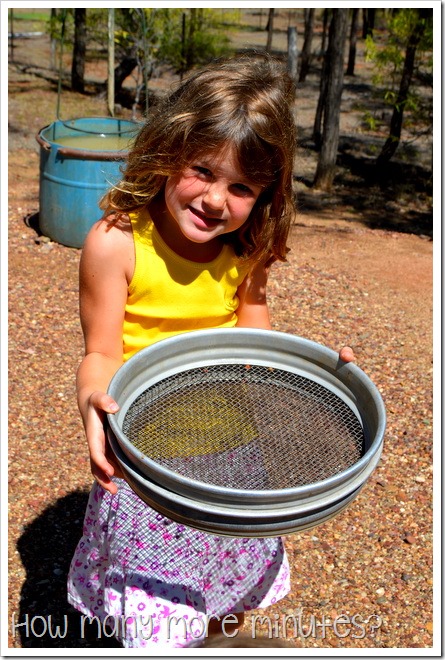 I need a picture of myself holding this empty tray, too.  Because my sister did and I am totally big like her.  But I am not letting go of these tweezers because they are mine.  All mine. 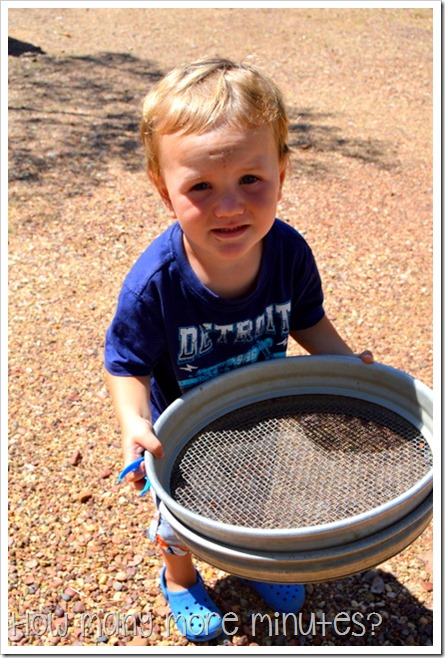 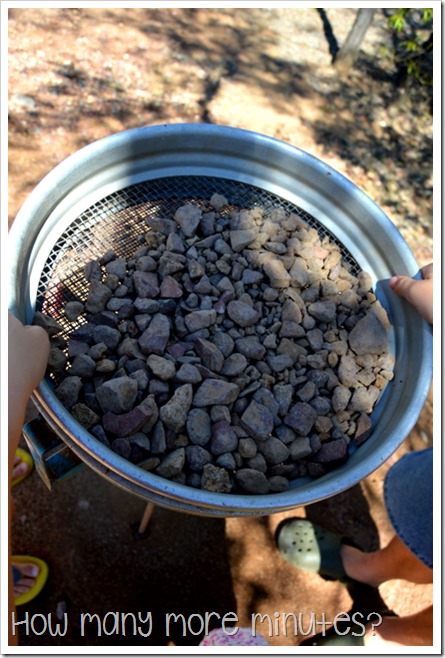 First you shake all the dust off of them.  Just attach it to this fancy dust-shaker-offer and shake away. 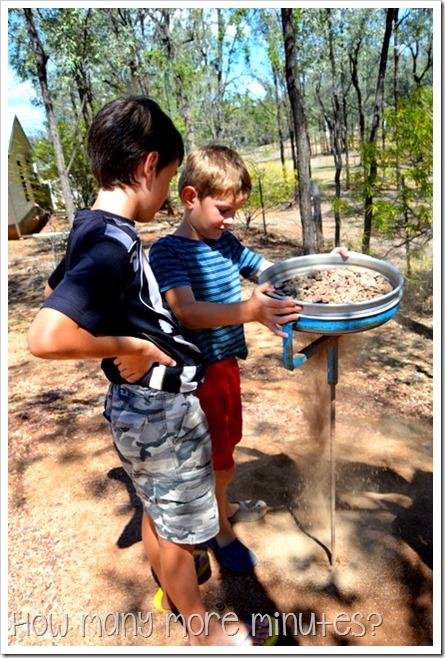 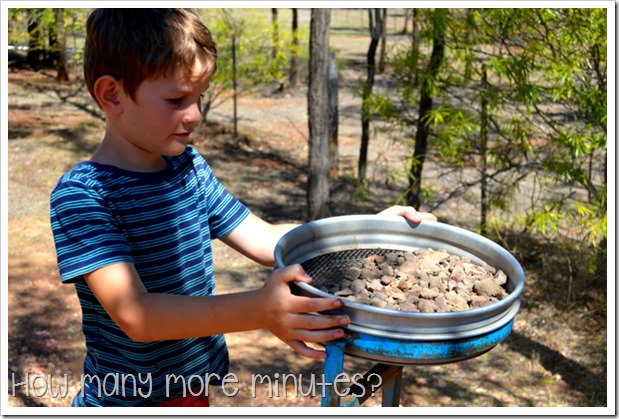 Then you’ll need to rinse of the rocks in this handy dandy rock-rinser-offer. 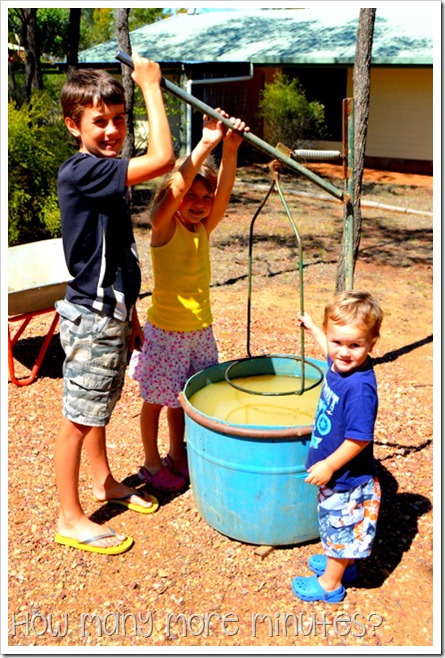 The tray fits right in there and you dip the rocks in for a good rinse. 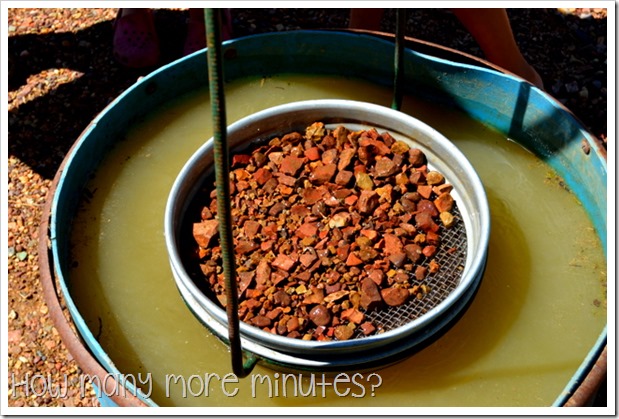 Then you tip them out on an old ironing board covered in burlap and search for your treasures!  Tweezers help, if you can wrestle a pair away from the toddler. 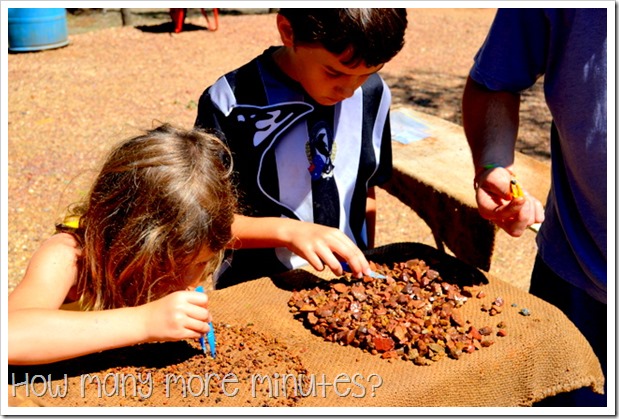 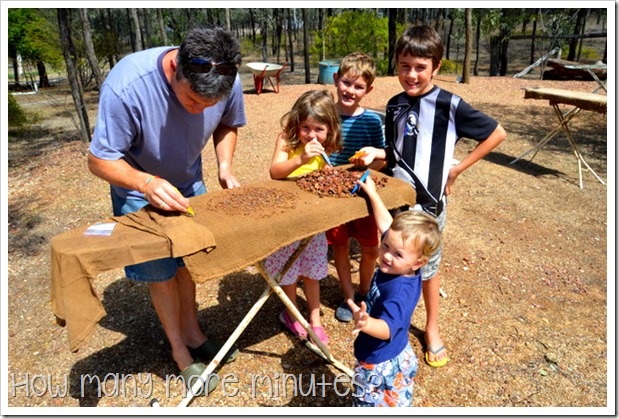 Our bag of rocks was big enough that we had a few rounds to go through, so everybody got turns at the various rock prepping processes.  Some of us may have pouted when we didn’t get our turn when we wanted it. 😉 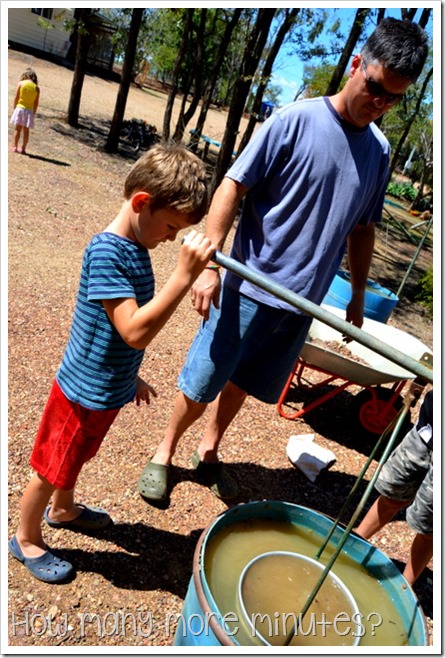 Hey, you can see our car and caravan back there!  It was a hot day with little shade where we were working, so we were thankful for that air conditioning when we were done. 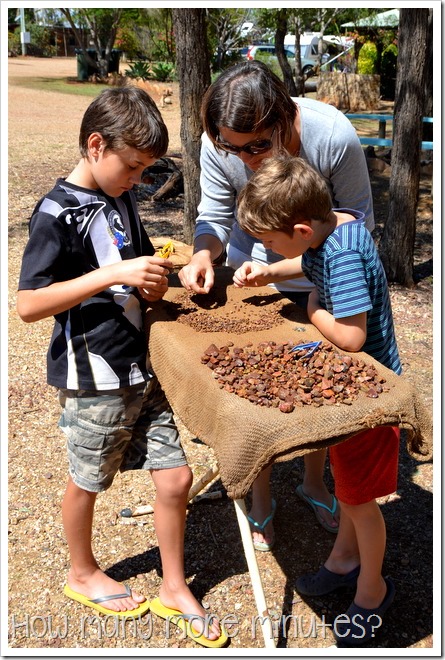 I know that if I keep trying I will be able to pick up this rock with these tweezers.  I do not believe you when you say that the rock is too big.  These tweezers are so cool and they can pick up anything. 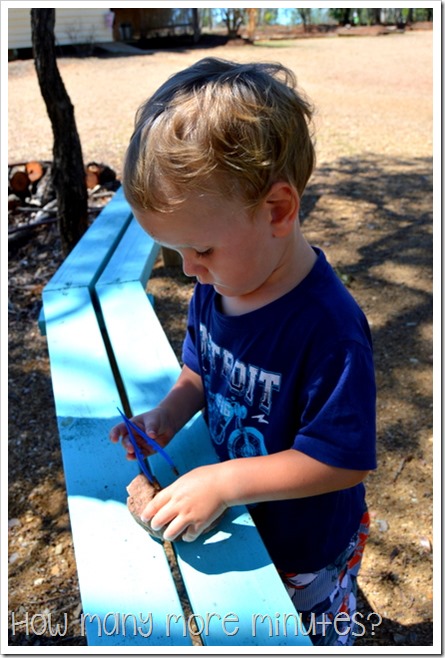 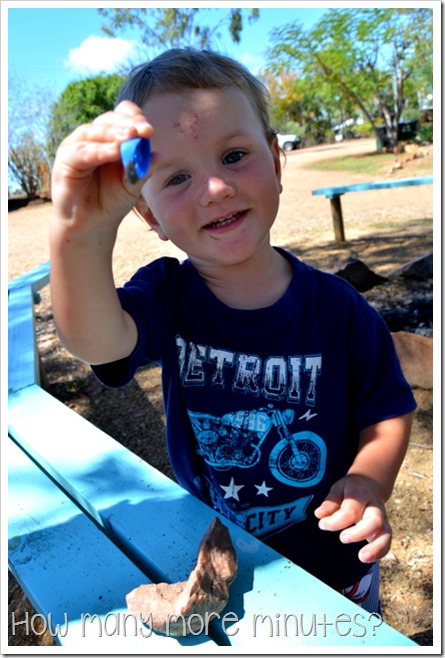 At the end of the day we had a nice little pile going.  We ended up with more than this.  Maybe one day we’ll get them polished and cut. 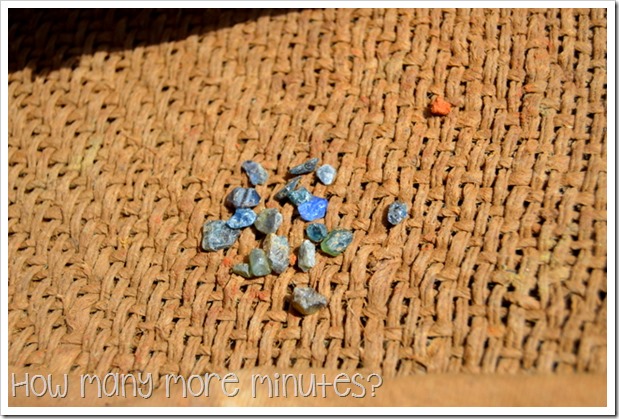 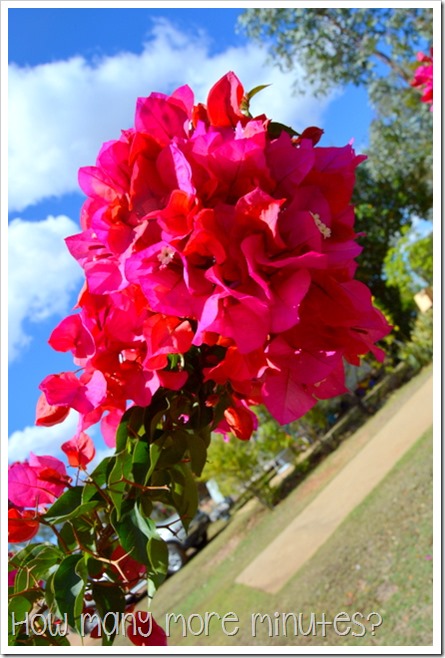 We had a drive around and considered doing some fossicking on our own but eventually decided against it.  I’m sure most of the public areas close to town have been fossicked through and through.  Further away from town you run the risk of going onto private land.  It was all a bit fascinating to see how people live in this area.  The houses are…unkempt, to say the least.  The kids kept asking why the town was so messy, there was a lot of junk around.  We imagined what it would be like if fossicking was your only source of income.  We drove to Sapphire in search of a Big Thing and eventually we found it right outside a gemstone shop.  A Big Sapphire Ring in the town of Sapphire.  We stopped in the shop and had a look at all the interesting gemstones and crystals. 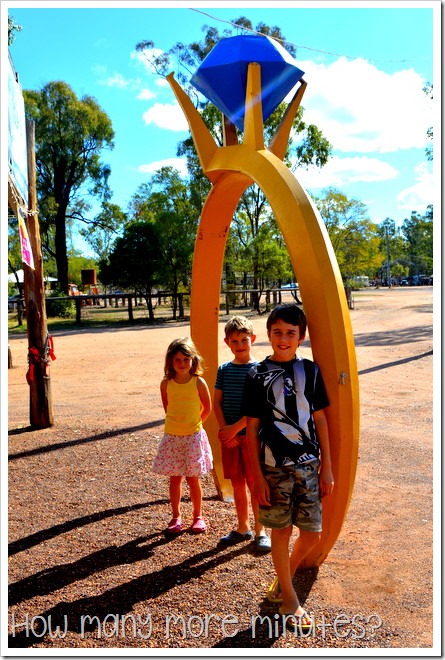 Along the road that day we saw a sign for the Tropic of Capricorn which runs right through the area. 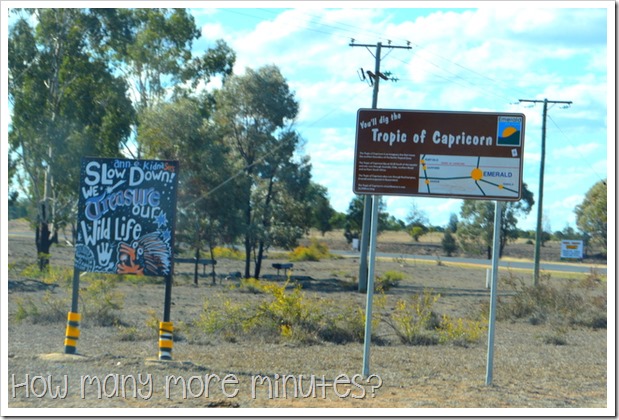 So now we’ve been fossicking in the Gemfields, part of Australia that I never knew to exist before this trip.  Goodbye beach.  Hello outback! 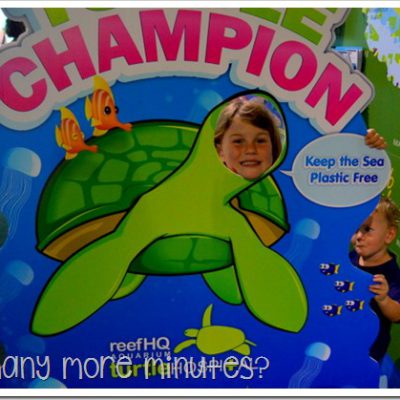 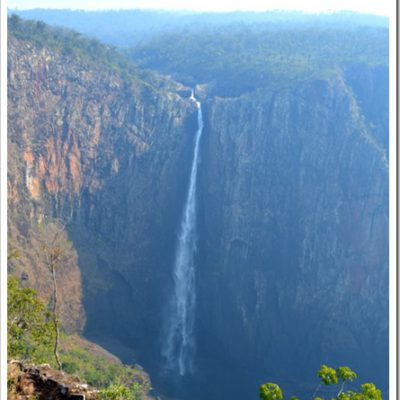 On our drive to Townsville from Innisfail we drove through Ingham where we stopped for... 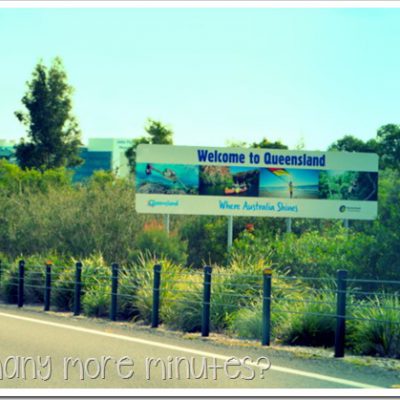 I’ve always wanted to visit beautiful, sunny Queensland.  After more than six months in our... 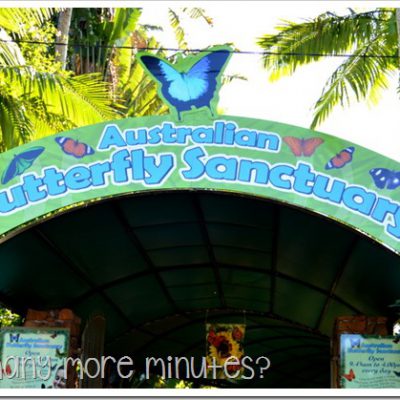 We always said we’d never get a caravan.  That’s not real camping, we said.  No... 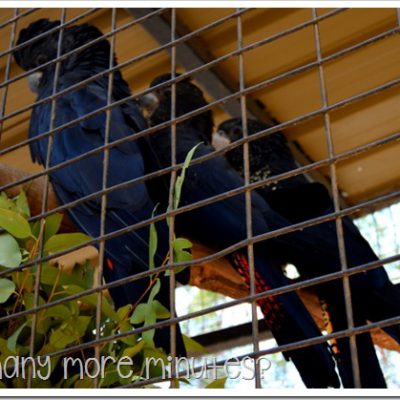