Our first night in Alice Springs had us up in the middle of the night washing sheets and cleaning the ensuite when gastro hit another of the kids.  We had a much needed rest the first couple of days in Alice, waiting to see if any of the rest of us would be sick.  Finally toward the end of our stay we made it out to see some sights, starting with the Royal Flying Doctor Service Tourist Facility. 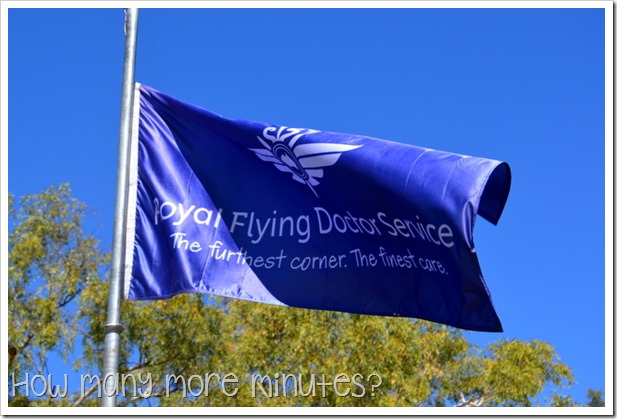 The facility has had a recent upgrade and they’ve done a great job with it.  I wish I’d gotten a picture of the front desk, they’ve made it up to look like an airline counter and the person behind the desk even wears an outfit reminiscent of an airline employee. 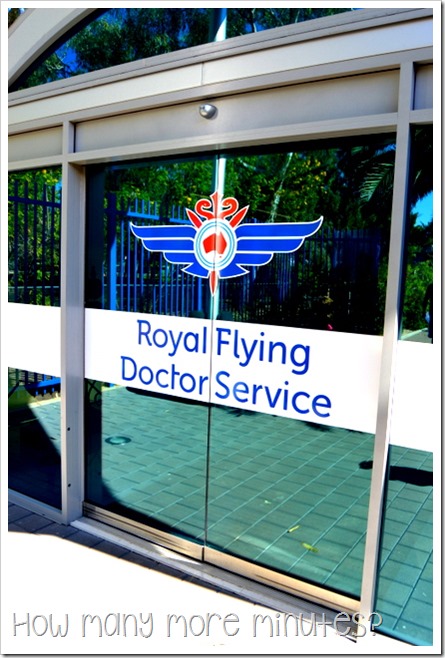 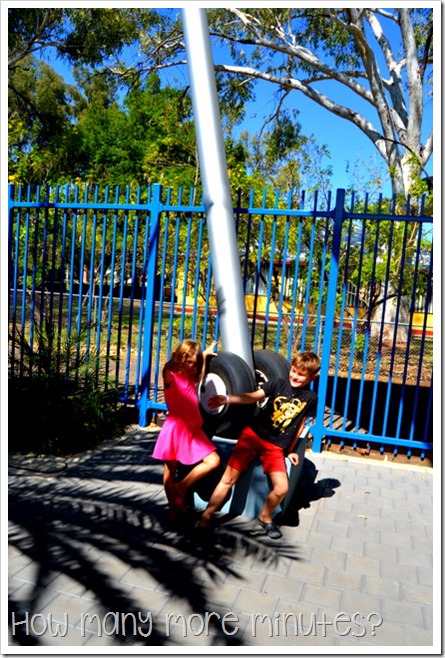 The tour starts with a short talk outside the theatre where they run through a basic explanation of the RFDS.  There was a screen on the wall showing current flights which you can also see on the main RFDS webiste.  She talked us through some stats and showed us an enlarged version of a $20 note which features John Flynn, the man who started RFDS.  We were led in to the very comfortable theatre where the man himself comes to life in front of you and tells you all about the history of the organisation.  Okay, not really the man himself, but an actor portrays John Flynn in a hologram which is a unique experience.  [Random memory: we shared our tour with a school group made up of teen girls.  We ended up in the front row in the theatre with TurboBug (2) sitting on his own seat at the end of the row with a couple of empty seats between us.  The theatre went dark and I was wondering if he’d be scared.  He didn’t make a peep until the hologram of John Flynn appeared.  ‘Mommy, look!’ he loudly exclaimed, and I heard teen girl giggles echo through the theatre.] After the holographic show you are left to wander the museum and shop on your own.  They have a replica of a Pilatus PC-12 in the gift shop area but to go through it costs a gold coin which we didn’t have that day.  We’d toured a jumbo jet recently so I didn’t feel to bad about not getting a look at this one! 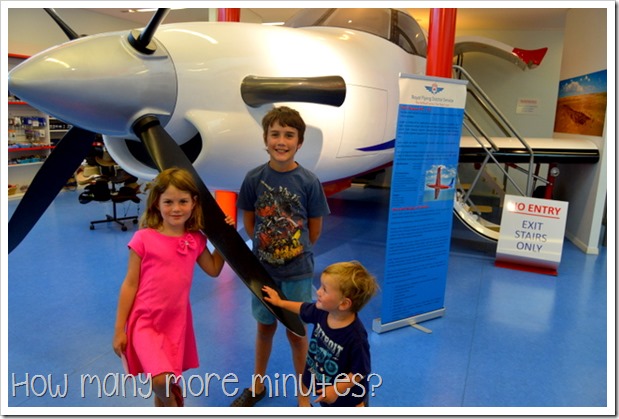 Speaking of the gift shop, it had the strangest assortment of goods I’ve ever seen at a museum.  From clothing (not just tourist t-shirts) to topiaries.  If I was in need of a topiary I’m thinking this isn’t the first place I’d think to look.  Not to worry, they had the usual assortment of souvenirs as well. 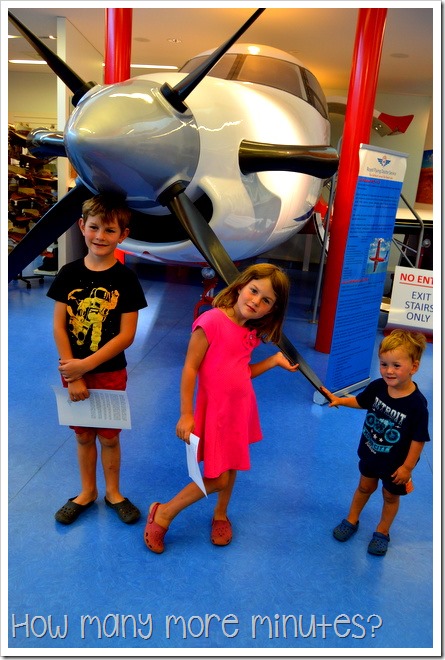 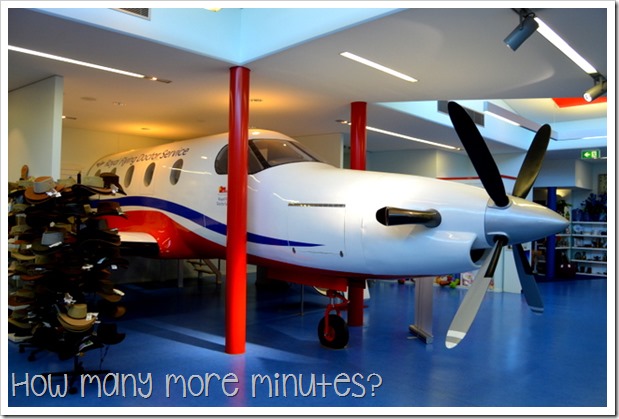 The museum itself wasn’t huge but was well done.  As you enter you see this gorgeous quilt on the wall.  I’m not really into quilts but the detail on this one was amazing! 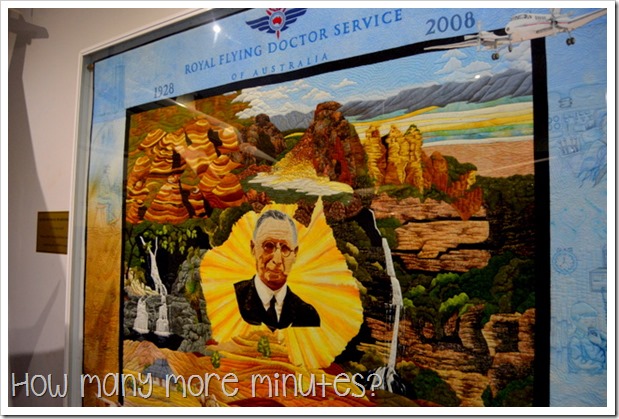 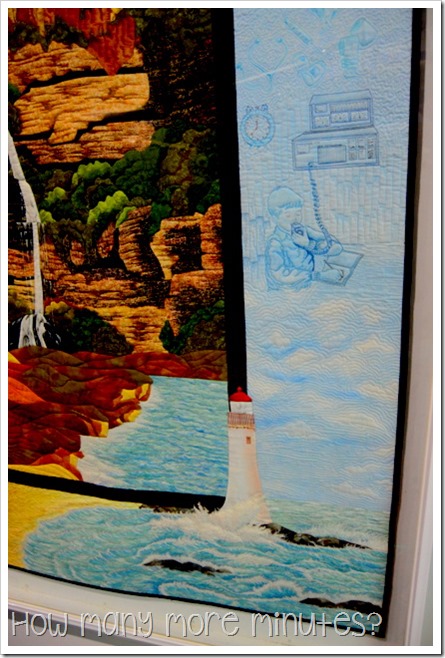 The ‘quilt room’ had some model planes.  That one on the left would be the first aircraft they used. 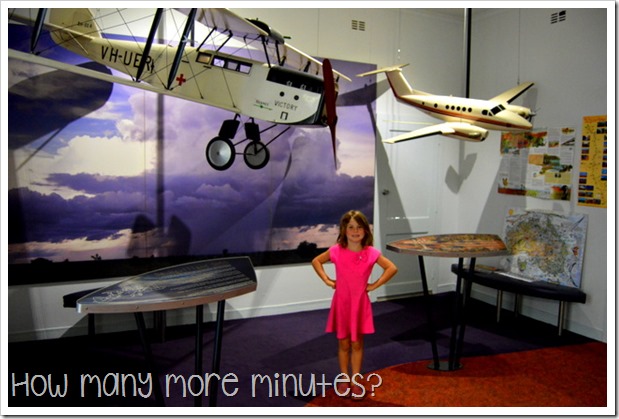 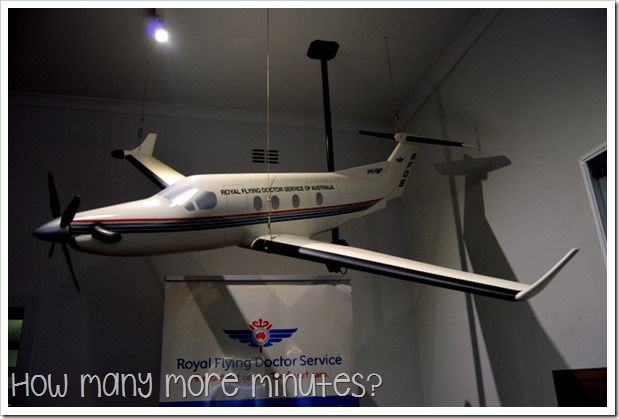 We were fascinated by this life-size display of the inside of one of the planes. We learned that it is often a nurse and pilot who work the flights while the doctor remains at the hospital unless the patient is seriously ill. 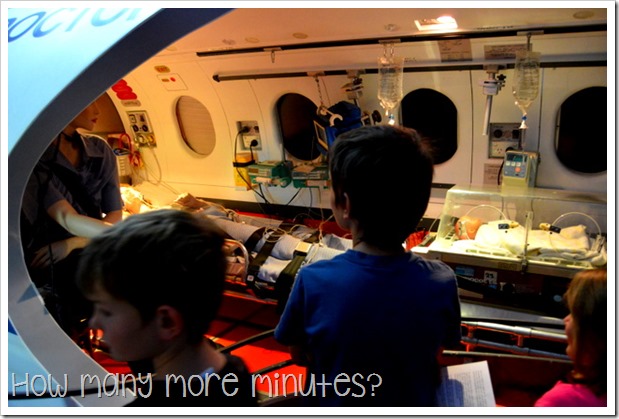 It was interesting to see how well they could fit everything inside the plane.  It’s downright spacious in there! (Spoken by someone who has been living in a caravan for a year now!) 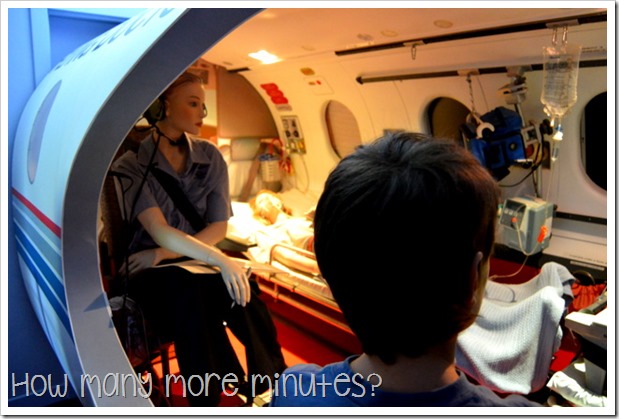 Hey, that’s where we are!  RFDS has 21 bases covering 80% of Australia.  They can reach anywhere (in the area they cover) within two hours.  They have over sixty aircraft now.  We were told that they are only allowed to use the planes for ten years.  Ten years doesn’t seem long for the life of a plane, but they have to ensure the highest safety.  See that CD display right behind SkeeterBug?  It’s one of those where you can press buttons to hear samples of the music.  TurboBug was entertaining everyone by pressing the buttons and then dancing to the music.  It was very cute, but I could not keep him away from it once he found it! 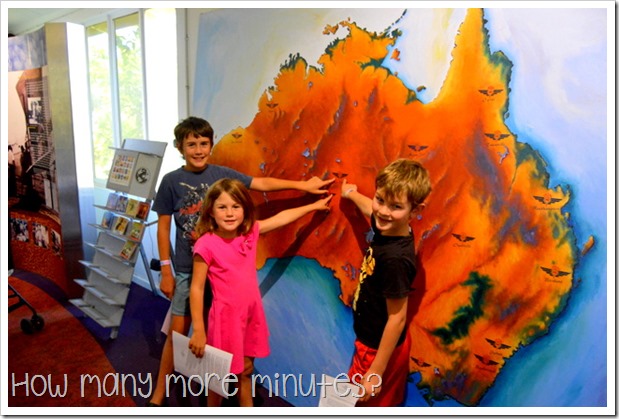 We found this poster on a wall and we weren’t the only ones staring at it.  Look how big Australia is! From Sydney to Perth it’s over three thousand kilometres.  With the population mainly around the coast that’s a lot of outback to cover. 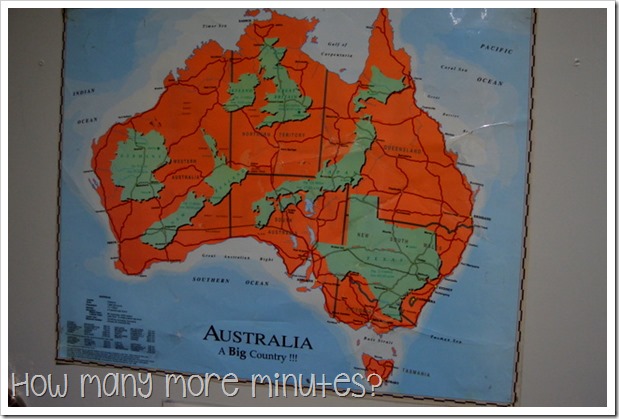 I found this picture of a royal visit in 1963.  That’s the Queen on the left and the Duke of Edinburgh on the right.  They told us that the RFDS got the ‘Royal’ designation in 1955.  The room featured some old radio equipment. 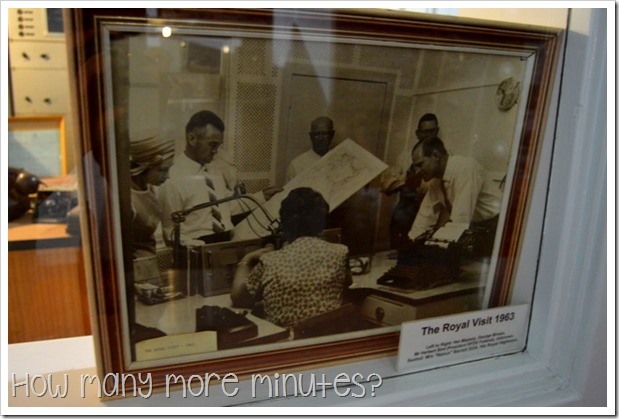 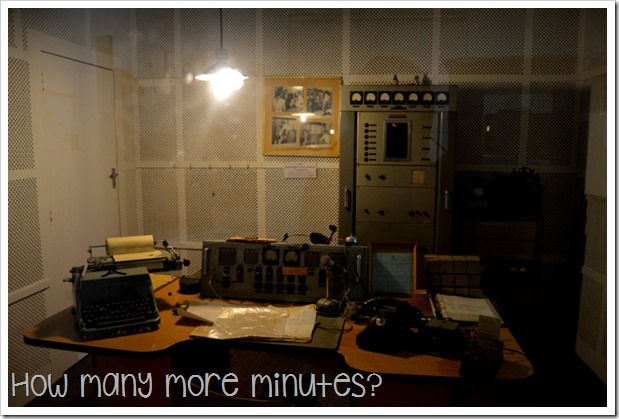 This is an old medical chest from 1958.  So interesting! We learned that they use a numbered body chart to help patients describe their problems so that they can make a diagnosis remotely.  If you look at a $20 note you can see an example of the chart. 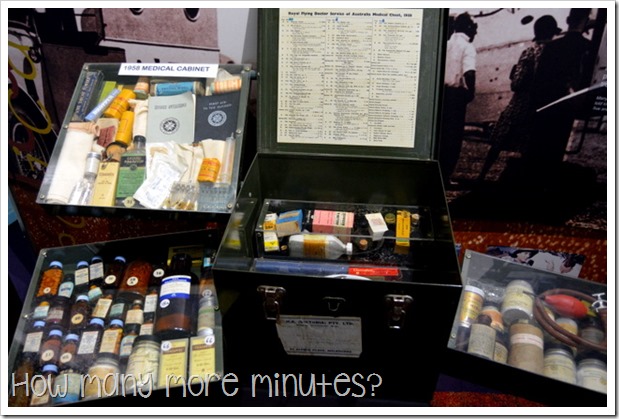 Just across the road we saw this giant statue and we were curious as to who this might be.  Turns out that it’s a statue of John Stuart.  A large John Stuart. 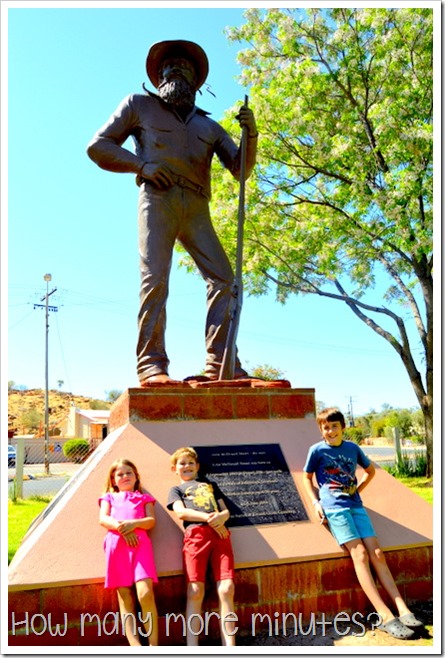 We’ve been travelling the Stuart Highway so the name is familiar to all of us.  He and his group were the first Europeans to travel through the centre of Australia.  The route he took became the general route of the telegraph line and eventually the highway, thus the name. 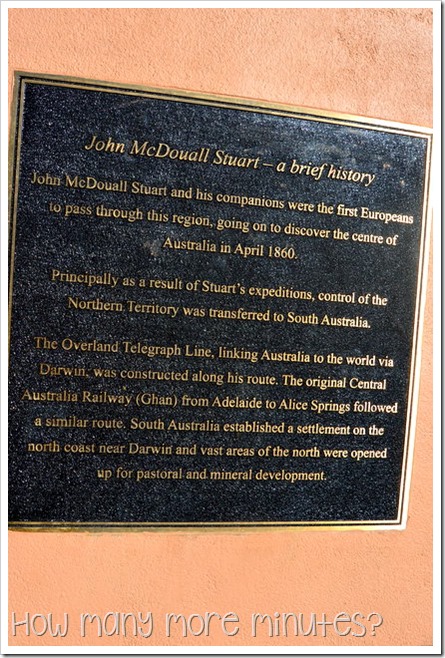 The statue is called ‘John McDuall Stuart – the man’ which made us giggle a little.  He’s the man, and he’s huge! 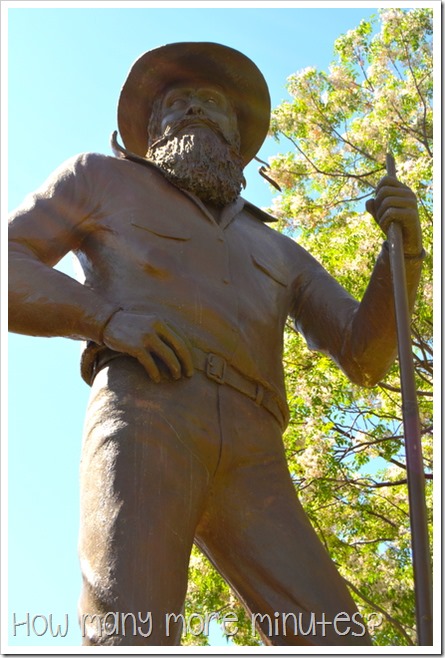 There were pretty flowers on the tree nearby.  🙂 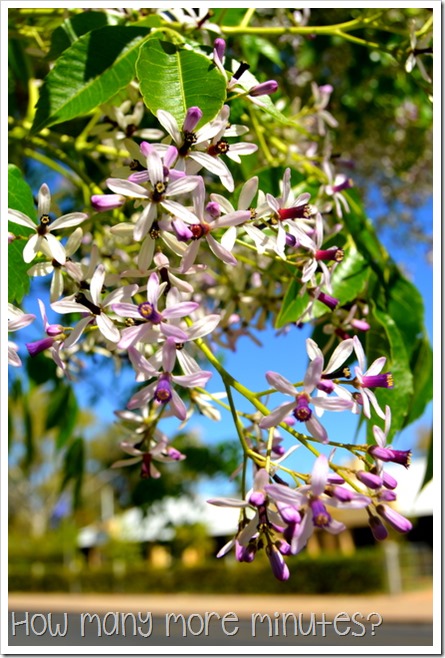 We intend to eventually visit the RFDS in Broken Hill, NSW where you can get a tour of a working base, the only one open to the public.  I’ve read on their website that only about 5% of Aussie kids have heard of the RFDS since so many live in urban areas and don’t rely on their services.  I find that interesting since it seems like such an iconic part of Australia, I’d definitely heard of it before moving here. 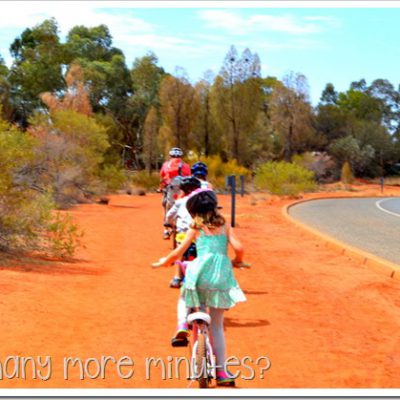 Yulara is small enough that you can walk to the town centre easily enough from... 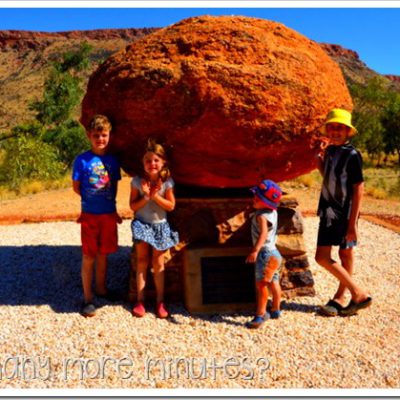 Our last stop during our visit to the MacDonnell Ranges was a quick one.  Close... 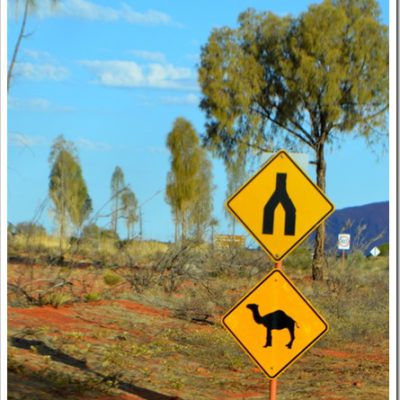 When you visit Uluru there are all sorts of tours you can do, one of... 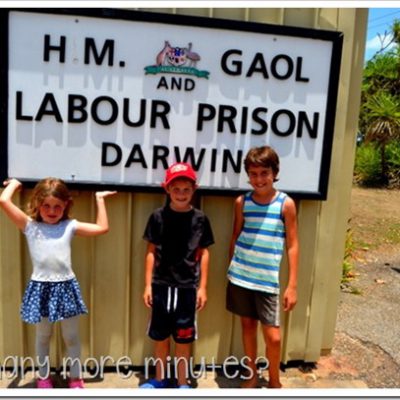 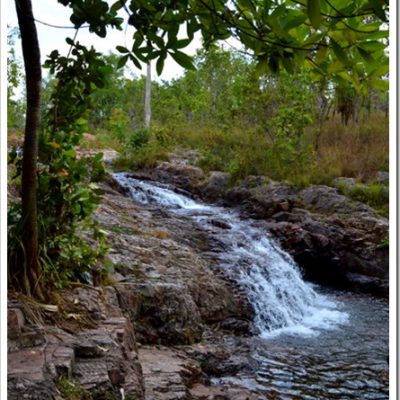