Sometimes my kids get along beautifully and I find them doing things like this.  Playing peacefully and joyfully together.  Other times, not so much. 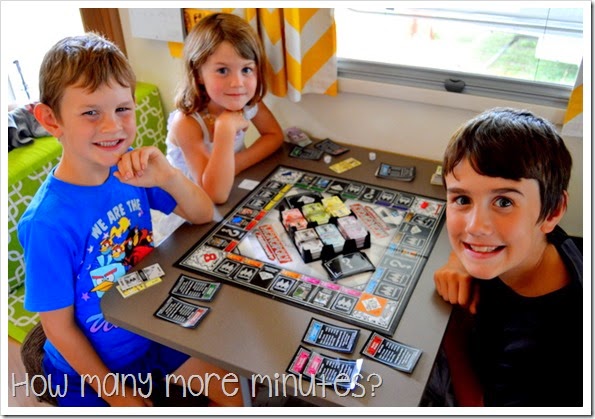 We stayed in this free camp in Scottsdale.  There was a small lake on one side and a busy highway on the other.  We were constantly chasing TurboBug since he loved pushing his pram up and down the road in the camp.  He loved this spot because of all the big trucks that drove by on the highway.  When we first got there we parked him in his little camping chair and listened to him call out “duck” (for truck) and “whoa” every time one went by. 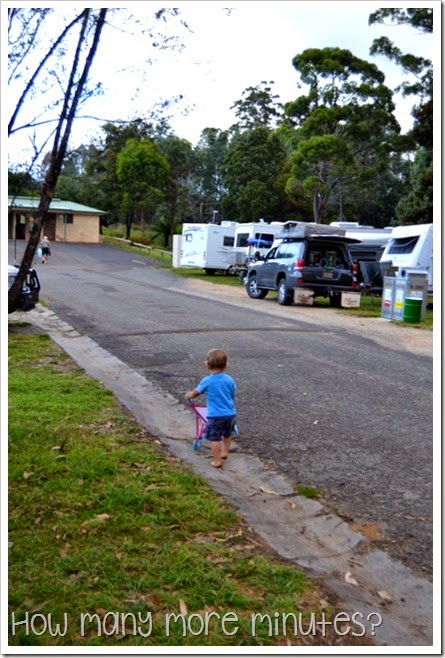 There was a mama duck who brought her little ones around twice a day for handouts.  She always hung back while her babies rushed forward.  They were not timid and would come right up to us and nearly take food from our hands.  Then she’d round them up and head them back toward the water.  The white duck in her brood made us laugh.  ‘One of these things is not like the other.’ (That’s from Sesame Street back in the day!) 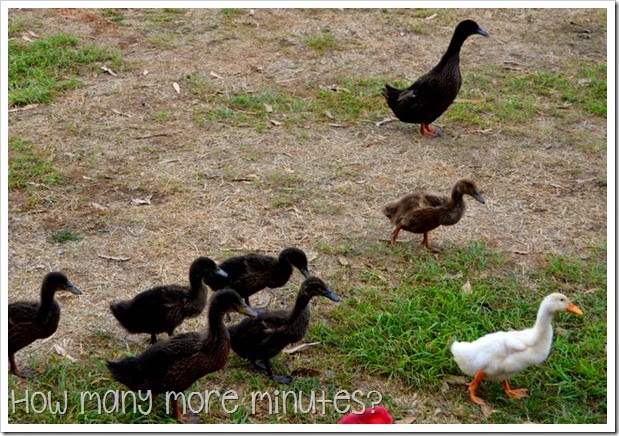 Our last morning here she brought them around before TurboBug had woken up so I took him over to the lake for a last feed.  We found some very tiny ducks in the water there, hiding in the reeds. 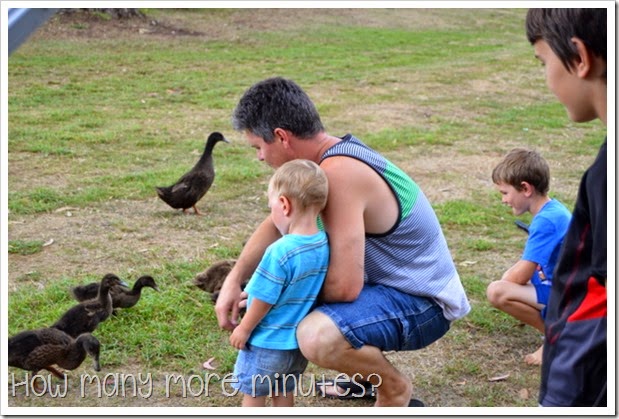 Sean’s uncle told us all about the greatest fishing spot ever.  We decided to make the drive to Targa to see for ourselves.  Mountain Stream Fishery is a great family outing, you’re guaranteed to catch a fish and they even clean them for you! 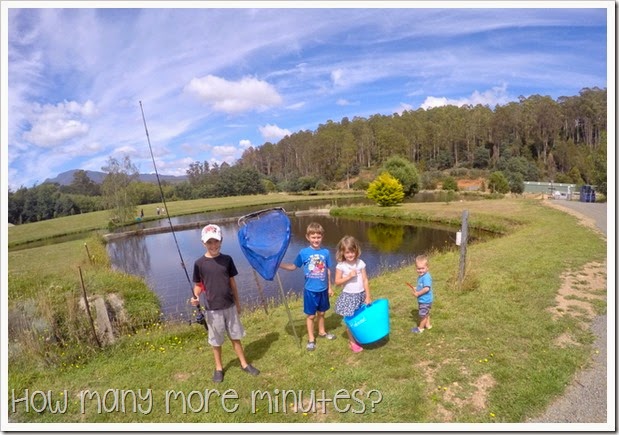 This is LadyBug’s first fish ever.  She was very excited.  She went first out of all of us and ended up with the biggest fish! It took her a few tries but she was very motivated.  ‘I catched one, I catched one!’ Not quite willing to hold it, though! 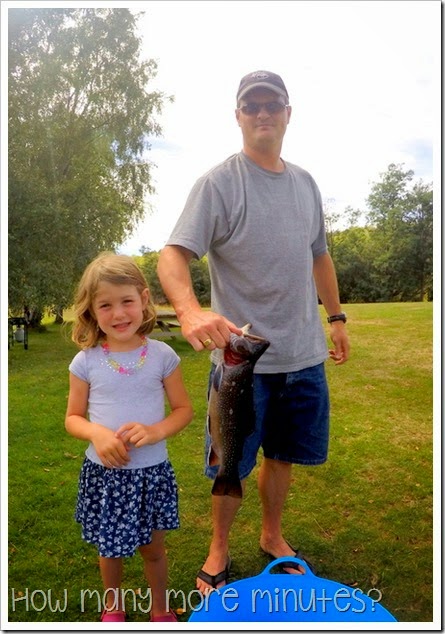 JitterBug caught his on the first try.  He could barely wait for his turn and it was over in a flash.  He didn’t seem the least bit disappointed, though. 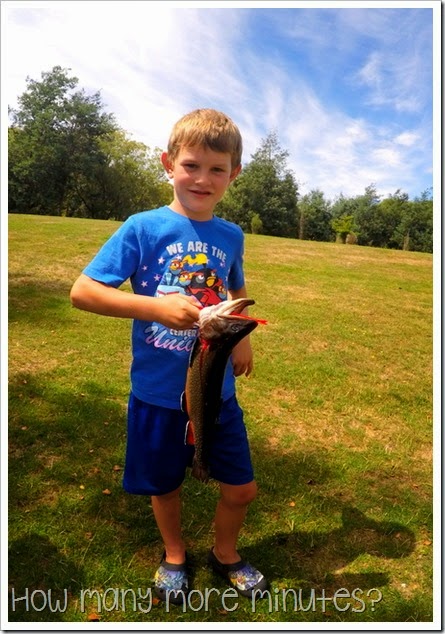 SkeeterBug also caught his on the first try! 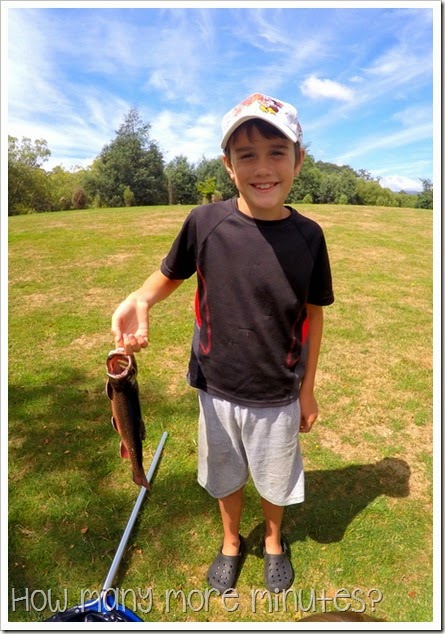 These are some good-sized trout!  You pay by the kilo here, they were proud to catch such big fish! 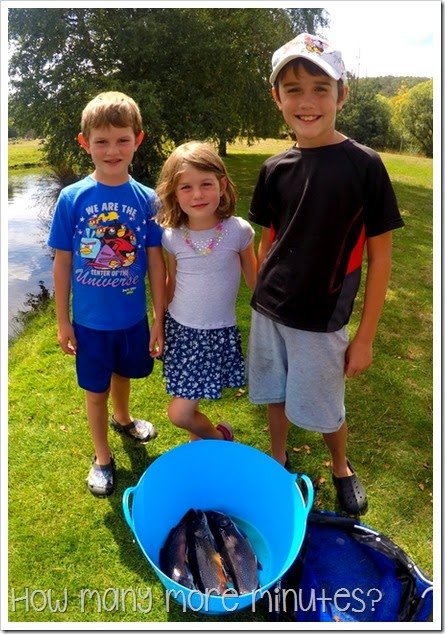 The adults had a go too.  Couldn’t resist. 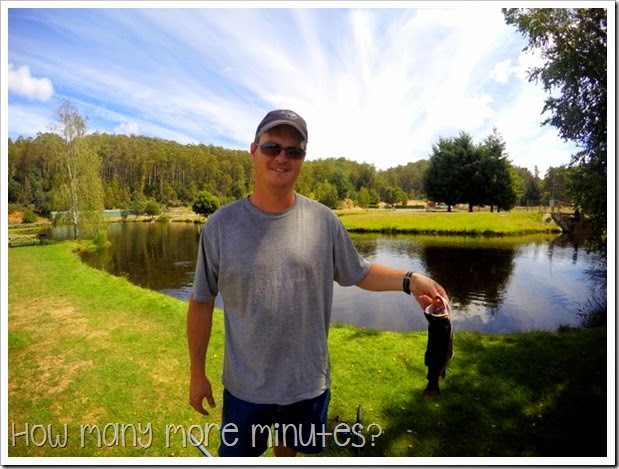 We ended up with five of these trout, weighing in at four kilos.  At one point TurboBug was over there with the line in the water.  There are so many fish in the water that he nearly caught one too! 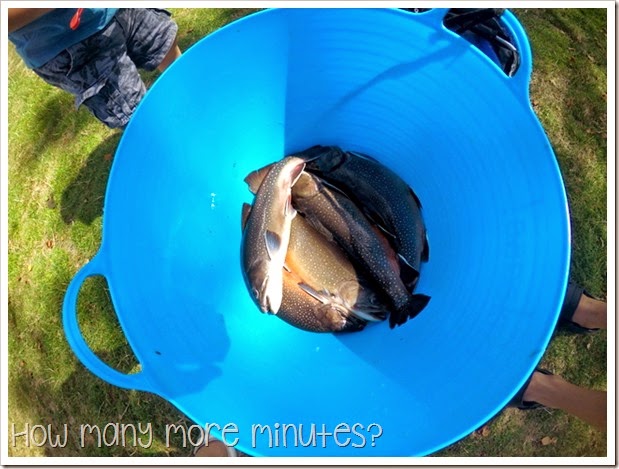 Excited kids after all the fishing was done.  TurboBug’s job was to hold the fishhook remover and hand it over to Dad as needed.  He was very good at his job and needed convincing to hand it over at the end. 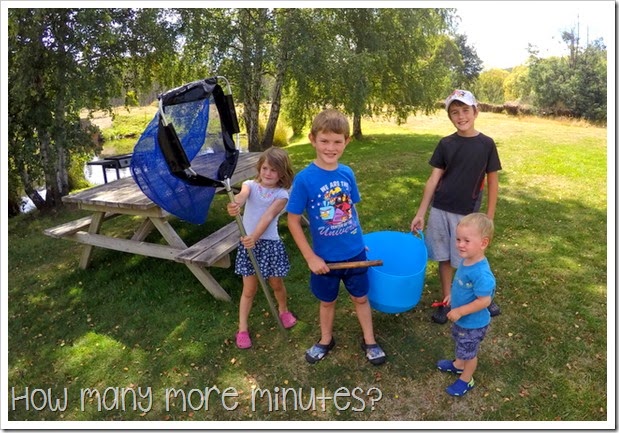 We headed back to the building where they cleaned the fish for us.  We were able to go right into the room and watch the whole process.  She even answered all our questions about fish anatomy and anything else that came up.  (Why do you have so many knives?  How do you clean the room?)  It was a lovely experience and special for the kids, they were treated so well, this place really understands how to interact with families. 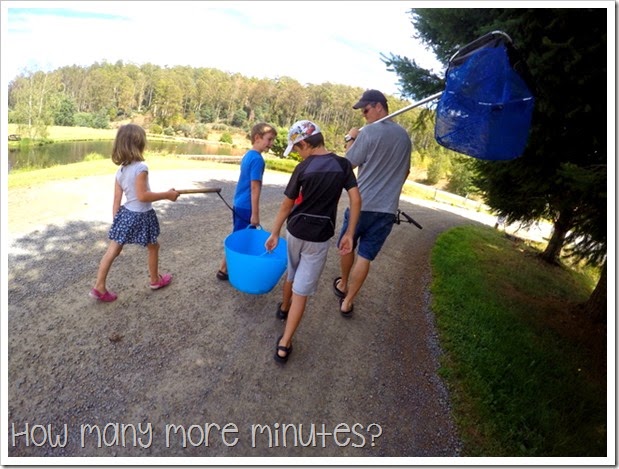 We weren’t allowed to fish out of this pool but you can purchase food to give them a feed if you’d like.  There were a couple of these golden trout in the water we fished and though we all hoped to catch one none of us were successful.  They told us that the golden trout will follow the lure but they rarely bite and though there have been many hopefuls there have been few who’ve caught one. 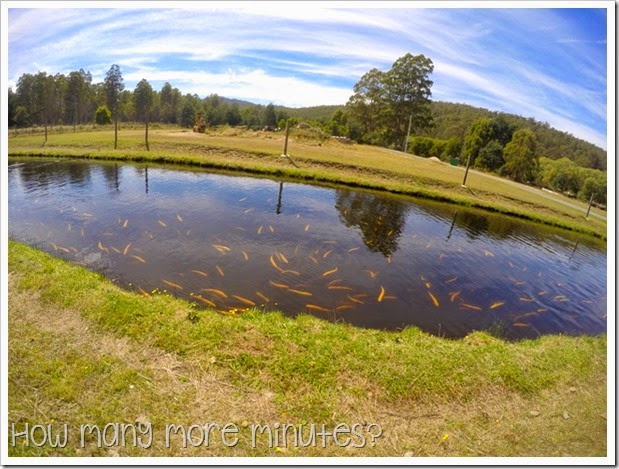 That night we dined on two of the fish.  TurboBug was right in there with the preparing.  He saw Dad stuffing them with tomato and onion and he took to helping right away.  He was so intent on what he was doing, so serious about this business of preparing dinner. 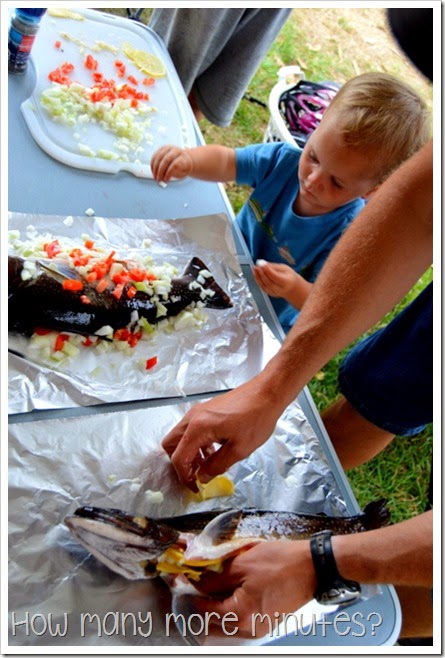 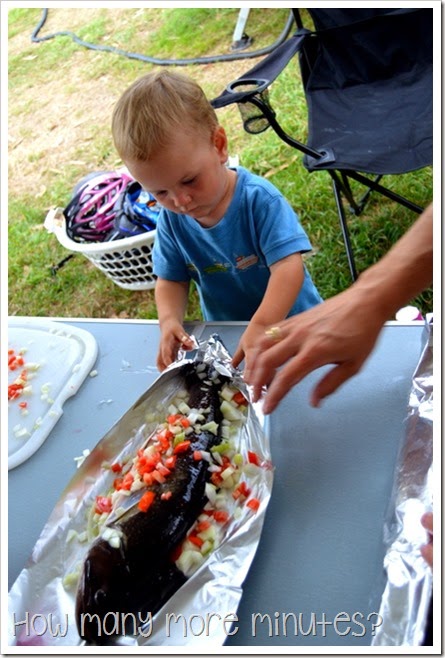 My sweet, sweet seven year old.  Love him so much.  It’s hard to get a good smile out of him on camera, so this is one of my favourite close-ups of him because that smile is so real.  Can you believe he hasn’t lost any teeth yet?  He’s checking them every day for wiggles! 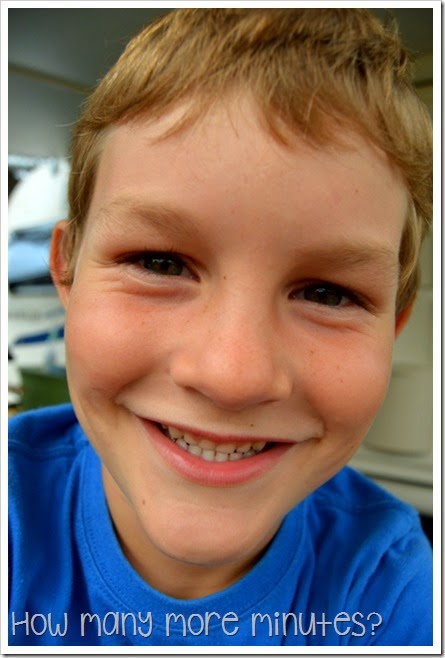 Dinner is served!  We cooked these on our Weber BabyQ.  Perfect. 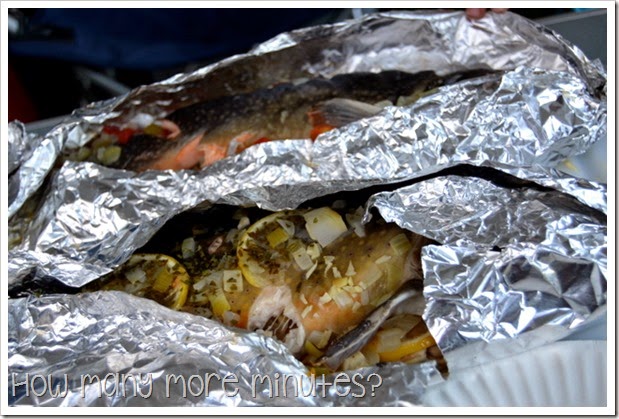 Cheesy grin.  I think I caught him picking food from his teeth.  Look at that crater dimple! 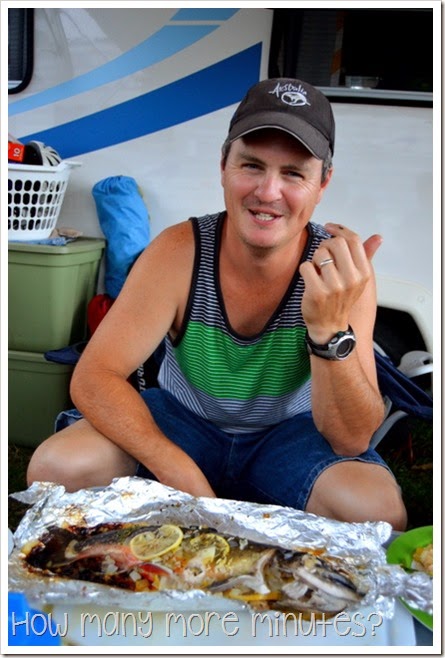 The free camp here was more like a rest area, with flush toilets and a pay shower. It was quite busy with many people stopping over just for the night.  We opted to stay two nights and then continued on to the east coast. 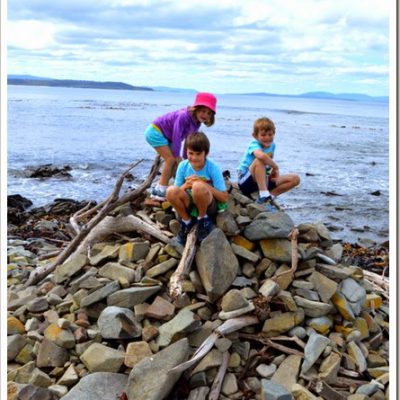 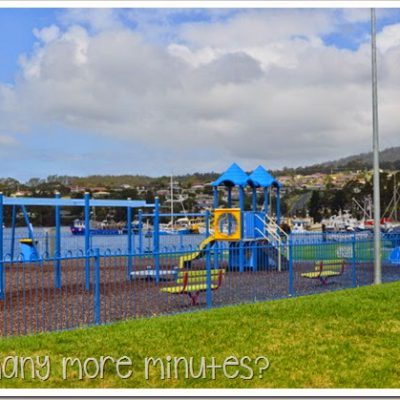 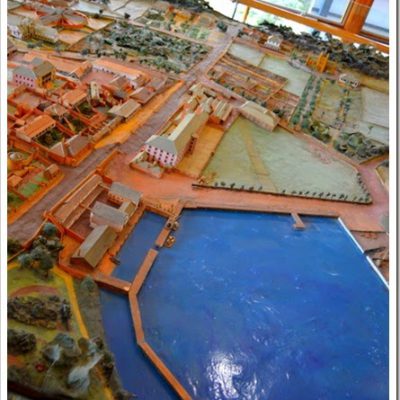 During our stay on the Tasman Peninsula we visited Port Arthur, a must-see for Australian... 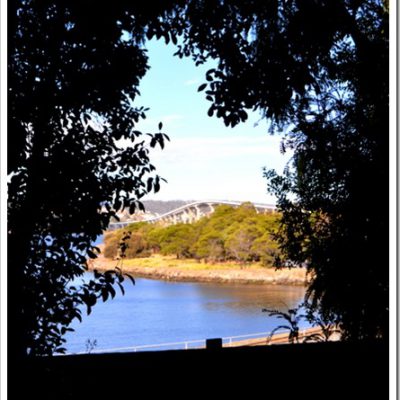 Part one is here. The gardens are right next to the Tasman Bridge.  I was... 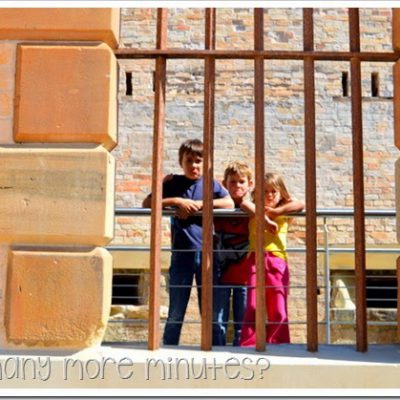 Part one can be found here. After our harbour cruise and some food we headed... 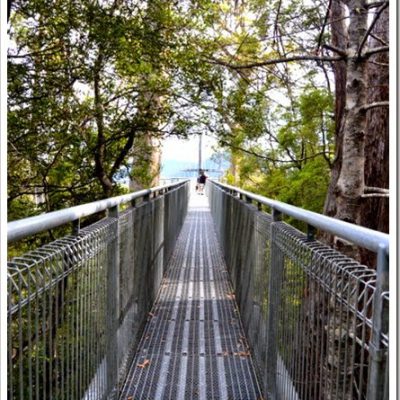 Here’s part one. By the time we made it near the treetop walk we were... 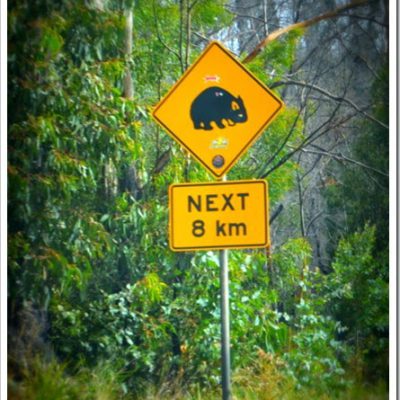 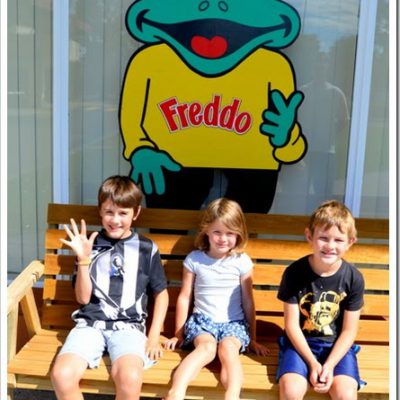